Wife of Confederate General and Senator 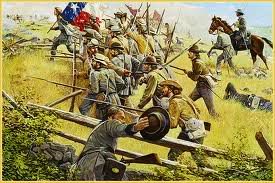 Charlotte Wigfall, wife of the 1st Texas Regiment’s Colonel, made her wedding dress into a Lone Star Flag for the Regiment, and presented this flag that she had sewn by hand to the regiment in the summer of 1861. Carried by the 1st Texas Infantry of General John Bell Hood’s Brigade, the flag was captured during the Battle of Sharpsburg – September 17, 1862 – after nine of the men who carried it had fallen.

Charlotte Maria Cross was born in 1818, and there is no further information about her early years. Louis Trezevant Wigfall was born April 21, 1816, on a plantation near Edgefield, South Carolina, to Levi Durant and Eliza Thomson Wigfall, a well-to-do socially-prominent couple. His father, who died in 1818, was a successful Charleston merchant before moving to Edgefield.

Wigfall’s mother was of the French Huguenot Trezavant family, and died when young Louis was 13. He was reared in a privileged and extremely class-conscious society. He immersed himself in the agrarian culture of the region and devoted himself to preserving and expanding it. Tutored by a guardian until 1834, Louis then spent a year at Rice Creek Springs School, a military academy near Columbia, South Carolina, for children of elite aristocrats. He attended the law department of the University of Virginia at Charlottesville. A perceived insult by another student prompted the first of many dueling challenges he would make.

In 1836, he entered South Carolina College to complete his studies, and graduated in 1837. Most of his time was spent at off-campus taverns rather than at his studies. During this time, he abandoned academics altogether for three months to fight in the Seminole War in Florida, achieving the rank of Lieutenant of volunteers.

In 1839, Wigfall was admitted to the bar, and returned to Edgefield and took over his brother’s law practice. Having squandered his inheritance, and with a proclivity for drinking and gambling, he accumulated debts. He borrowed from friends to maintain a freewheeling lifestyle, including from his second cousin and future bride, Charlotte Maria Cross of Rhode Island, whom he married in 1841.

Business as an upcountry lawyer didn’t suit his temperament and sense of purpose, nor prove to be as profitable as he had hoped. Wigfall believed in a society led by the planter class and based on slavery and the chivalric code. He often neglected his law practice for contentious politics.

His initial foray into politics and the Brooks affair destroyed his law practice. He was elected delegate to the South Carolina Democratic Convention in 1844, but his violent temperament and behind-the-scenes meddling had already doomed his youthful political ambitions. He piled up medical bills on a sickly infant son who eventually died. Sheriff sales followed, swallowing up his Edgefield estate.

Wigfall witnessed South Carolina’s dispute with the federal government over tariffs and became a lifelong advocate of states’ rights. He carried his two core beliefs – in the romance of the Old South and the sovereignty of individual states – with him to Texas in 1848.

After Texas joined the United States in 1846, tens of thousands of immigrants poured across its borders in search of cheap land and new lives. Most came from the American South, which by then had developed a distinct culture based upon cotton and slavery.

A Texas cousin, James Hamilton, Jr., a former governor of South Carolina, arranged a fresh start for Wigfall, and a law partnership. First arriving in Galveston in 1848, he then moved withCharlotte and their three children to Nacogdoches, where he was a law partner of Thomas J. Jennings and William B. Ochiltree. Soon Wigfall opened his own law office in Marshall.

Wigfall was active in Texas politics from the moment he arrived, alerting Texans to the dangers of abolition and the growing influence of non-slave states in the United States Congress. He quickly established himself as one of the community’s most ardent and vocal fire-eaters, a name given to Southerners who supported radical means to defend slavery and states’ rights.

At the Galveston County Democratic convention in 1848, Wigfall condemned congressional efforts to prohibit the expansion of slavery into the territories, and expressed sorrow that Texas would not take the lead in opposing such unconstitutional actions.

Wigfall served in the Texas House of Representatives from 1849–1850, and in the Texas Senate from 1857–1860. He played a major role in organizing Texas Democrats and fighting the American (Know-Nothing) party in 1855-56.

When Senator Sam Houston ran for governor in 1857, Wigfall followed him on the campaign trail, attacking his congressional record at each of Houston’s stops, and accusing Houston of being a coward and a traitor to Texas and the South. Wigfall claimed that Houston had ambitions for a presidential nomination and courted the support of Northern abolitionists. Wigfall was one of the few men in Houston’s opposition who rivaled him as a stump speaker, and he was widely credited with Houston’s defeat for the governorship in 1857.

In 1858, Wigfall had a strong voice in the state Democratic convention that adopted a states’ rights platform. With the breakup of the Know Nothing Party, many moderates moved back into the Democratic party, and it appeared that Wigfall’s radicalism was repudiated. But he capitalized on the fear that John Brown’s raid on Harper’s Ferry caused in the slave states.

In 1859, Wigfall was selected by the legislature to represent Texas in the United States Senate, filling the vacancy caused by the death of J. Pinckney Henderson and served from December 5, 1859, until March 23, 1861. As “the most violent partisan in the state,” according to one contemporary, Wigfall was a natural choice for a state that was more and more supportive of the political position of the Deep South.

In the Senate, he became a leader in the effort to assure southern slave-owner’s freedom to settle in the territories with their slaves. He continued his by-now familiar diatribes against federal powers and northern intrusion into southern life. He rarely concerned himself with Texas, but identified closely with his native South Carolina.

Wigfall was among a group of leading secessionists known as Fire Eaters. He earned a reputation for eloquence, acerbic debate, and readiness for encounter. He continued his fight for slavery and states’ rights and against expanding the power of national government. His reputation for oratory and hard-drinking, along with a combative nature and high-minded sense of personal honor, made him one of the more imposing political figures of his time.

One of the most vociferous advocates for secession, and one of the people most responsible for tying the fortunes of the Lone Star State to the Confederacy, was Louis T. Wigfall. Texas had become a part of the Old South, and when southern states began leaving the Union in 1860, Texas followed suit. In 1860, Wigfall was instrumental in fracturing the Democratic Party, hoping to kill any possibility of compromise between north and south.

Wigfall coauthored the Southern Manifesto, declaring that any hope for relief in the Union was gone, and that the honor and independence of the South required the organization of a Southern Confederacy. Wigfall helped foil efforts for compromise to save the Union and urged all slave states to secede. When South Carolina led the parade of southern states out of the Union, Wigfall rejoiced.

Wigfall joined the Texas delegation to the Montgomery Conference in Alabama, which formed the provisional government of the Confederacy, and which selected Jefferson Davis as its president. In Washington, Wigfall continued to hold his seat for 6 days after Texas had seceded on March 1, 1861, exhorting the rightness of the Southern cause and berating his Northern colleagues on the floor of the Senate and in Capitol Hill saloons.

During this time in Washington, he spied on Federal preparations for the coming conflict, secured weapons for delivery south, and went to Baltimore, Maryland, and recruited soldiers for the new Confederacy before traveling to the Confederate capital at Richmond, Virginia. He was one of ten Southern senators who were expelled in absentia on July 11, 1861.

He was admitted to the Provisional Confederate Congress on April 29, 1861, where he served on the Committee on Foreign Affairs. Wigfall was at Fort Sumter in April 1861 when the Civil War began, gleefully demanding the surrender of the Federal post. Between April and July 1861, he was a member of the Provisional Congress of the Confederacy, and served as an aide to Confederate President Jefferson Davis.

Wigfall continued his service to the Confederacy as a military commander – without great distinction, as according to many accounts he was often inebriated. He was commissioned colonel of the First Texas Infantry on August 28, 1861, and on November 21 Davis nominated him brigadier general in the Provisional Army, a move later confirmed by the Confederate Congress.

Wigfall commanded the Texas Brigade of the Army of Northern Virginia (Hood’s Texas Brigade) until February 20, 1862, when he resigned to take a seat in the Confederate Senate and represented the State of Texas for the remainder of the war. Despite his public advocacy of states’ rights, Wigfall did little for Texas. In the Senate, he worked for military strength at the expense of state and individual rights.

An arrogant man, Wigfall came into conflict with President Davis. After the chief executive vetoed Wigfall’s bill to upgrade staff positions in the army and limit presidential selection, Wigfall carried his fight into social circles, even going so far as to refuse to stand when Davis entered the room. Although a friend and supporter of the Confederate military, he was also an obstructionist in opposing Davis’ nominations.

When Richmond fell, Wigfall fled Virginia. He first went home to Texas for almost a year. In the spring of 1866, he moved to England, and spent six years in self-imposed exile. He practiced law in England, but returned to the United States in 1872, first residing in Baltimore, MD.

Louis Trezevant Wigfall returned to Texas, landing at Galveston in January 1874. He intended to revive his long-dormant law practice, but he died unexpectedly on February 18, 1874, and was buried at Trinity Episcopal Church Cemetery in Galveston. I found no record of the death of Charlotte Maria Cross Wigfall.