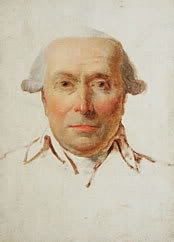 Maria Hautefeuille was born into an established family in Calais, France. Being very willful in her youth, she ran away from home and went to London, where she adopted the name Petronille and married Joseph Martin. Philip Mazzei (pronounced: maht-say) was born in 1730 near Florence, Italy, and practiced surgery briefly.

In 1764, Mazzei rented a large house in London – planning to use the ground floor as a shop, to live on the second floor, to rent out the third floor furnished, and the fourth unfurnished. Before he could rent the upper floors of his four-story house, Mazzei had to have the rooms re-papered. A young man named Joseph Martin was sent by the wallpaper manufacturer to take charge of the job. After he had finished, he asked if he might rent the top floor. It was agreed, and he, his wife, and small daughter Maria Margherita moved in.

Soon after the Martin family moved in Mrs. Martin gave birth to a son, who died at the age of ten months, and poor Martin, overcome with grief, died shortly after, toward the end of the year 1764. During the year of their acquaintance Mazzei had become intensely fond of the Martin family, and Martin had begun to look upon Mazzei as his dearest friend. On his deathbed, he begged Mazzei to look after his widow and his little daughter. This Mazzei promised to do.

Philip Mazzei befriended Thomas Jefferson through business connections several years before they actually met. Jefferson was instrumental in persuading a number of persons to come to Virginia from Italy and France for the purpose of introducing the production of wine, olive oil, citrus, and silk. The most prominent of these was Dr. Philip Mazzei.

There was a great deal of interest in London in investing in American land, and Mazzei decided to go to America to introduce the vines, olives, citrus trees, mulberry trees, and silkworms he was familiar with. After working as a wine merchant for eighteen years, Mazzei left London in the fall of 1772, and spent more than a year in Tuscany assembling agricultural workers and materials for his project.

Mazzei arranged for a ship to transport himself, Mrs. Martin, and her daughter, and all their gear to Virginia. They set sail on September 2, 1773, and after three months landed somewhere between Cape Henry and Cape Charles. 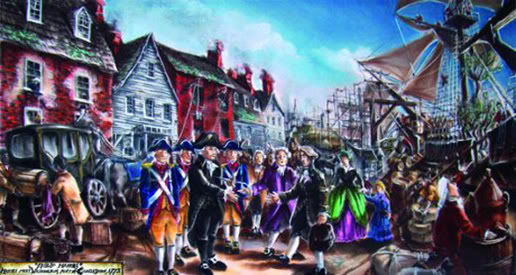 Although the Virginia House of Burgesses had agreed to grant Mazzei 5000 acres of land in Virginia for his project, the land was scattered and unsuitable for his purpose. Mazzei decided it would be better to buy land on his own.

While in London, Mazzei had met Thomas Adams, a Virginian conducting business in England. Adams, who had also returned to Virginia, was building a new home in Augusta County. Leaving Mrs. Martin and her daughter in Williamsburg, Mazzei started west with Adams with the intention of buying some land adjoining Adams’ estate.

The Virginia Legislature had promised Mazzei some land in Augusta County, and on his way to the Shenandoah Valley, he stopped at Monticello for several days to see Jefferson, who had an intense interest in agriculture. When Mazzei discovered that the land he was to receive was divided into separate tracts, he was persuaded by Jefferson to settle on a tract of land adjoining Monticello on the east.

Jefferson gave Mazzei 193 acres of land on the south side of Monticello, and Mazzei purchased another 700 acres by 1778, and named his farm Colle. Mazzei then returned to Williamsburg to get Mrs. Martin and her daughter. 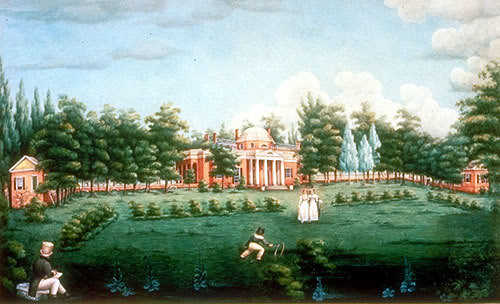 Thomas Adams frankly asked Mazzei why he didn’t marry Mrs. Martin, and told him that Virginians
wouldn’t understand their living arrangement. Mazzei replied that he was supporting Mrs. Martin on account of the promise made to her dying husband, and that he feared marrying her. She was prone to be vain and haughty, and he was afraid she would become unbearable.

Mazzei was persuaded, and immediately upon reaching the Eppes’ home, where Mrs. Martin had been staying, he induced her to go with him to the home of Mr. Richard Randolph, Justice of the Peace, who married them and gave a dinner in their honor.

Mazzei soon moved with his wife and stepdaughter to Albemarle County. They lived at Monticello while their own home was being completed. The agricultural project at Colle got off to a good start, but in May 1774, a late frost destroyed the crops and ruined the grapevines that had been planted. Yet Mazzei felt that Virginia soil and climate was “better calculated” than any other for wine production.

Mazzei and Jefferson worked on composing propaganda and electing Independent Companies – volunteers from each county to become representatives for a Convention, rather than the Assembly. Elected to the vestry after only six months of residence in the area, Mazzei began to speak in various churches about Jefferson’s ideas on religious freedom.

The wine company failed to thrive, and Mazzei began to establish his reputation as a Patriot by joining the Revolutionary War effort. He became a private in the independent company of Albemarle when the British first landed troops at Hampton.

In November of 1774, Mazzei formed a new agricultural partnership with Lord Dunsmore, George Washington, Thomas Jefferson, and 33 other prominent Virginians. The enterprise struggled along until 1779, when Mazzei departed for Europe.

The phrase in the Declaration of Independence, All men are created equal, was suggested by the Italian immigrant Philip Mazzei, who wrote the following passage that appeared in The Virginia Gazette in 1774, and was translated from the Italian by Thomas Jefferson:

All men are by nature equally free and independent. Such equality is necessary in order to create a free government. All men must be equal to each other in natural law.

Jefferson gave Mazzei a copy of the rough draft of the Declaration of Independence, and an excerpt of Mazzei’s Instructions of the Freeholders of Albemarle County to their Delegates in Convention was used by Jefferson in his attempt to institute a new Virginia state constitution.

By 1778, it was decided by Jefferson, Patrick Henry, George Mason and others that Mazzei’s willingness to participate in the cause of liberty could be used abroad. Mazzei was commissioned as an agent of the State of Virginia to travel to Europe to borrow money for Virginia from the Grand Duke of Tuscany, to promote independence for the American Colonies, and to gather useful political and military information for then Governor Jefferson. The State of Virginia paid him six hundred luigi a year between 1779 and 1784 for his services.

Jefferson rented Colle for him in February, 1779, and Mazzei sold his household goods and equipment, and put everything in shape to leave. As Mazzei had forseen, he and his wife didn’t get along amicably, and his plan was to take his wife with him to Calais and leave her there with her sister, but she by no means remained in Calais.

On October 14, 1780, Mazzei’s stepdaughter Maria Margherita Martin married Justin Pierre Plumard de Riex in Paris. Comte de Rieux was an officer in the Body Guard of Louis XVI, so that he and his young wife and presumably his mother-in-law lived in Paris and Versailles until sometime in 1783.

Having received a letter from Governor Harrison advising him to return to Virginia, Mazzei left them, went to Nantes, and sailed for Virginia, arriving at Hampton in November, 1783. Having become a naturalized citizen of Virginia, Mazzei hoped to receive a post as a consulate, but he was disappointed.

Early in 1784, Mazzei moved about Virginia, living at Monticello and with various friends, since Colle was unfurnished. He received word from the de Rieux – Maria and Justin – that they were in Charleston, SC. Not being able to stand their mothers-in-law, the couple had left France soon after Mazzei. Mazzei sent them some money and offered them Colle as a home, and a neighbor lent them some furniture and saw to it that they were comfortably established. Mazzei received news in late 1784 that his wife had returned to Virginia. So completely estranged had they become that Mazzei never saw her again.

Mazzei continued to travel in America until 1785, when he decided to return to Europe. He wanted to see his friends there, and to be near Thomas Jefferson who was then in Paris, but he evidently expected to return, since he owned several hundred acres which comprised his estate and lots in Richmond, and some Virginia State bonds.

For the remaining 25 years of his life he traveled throughout Europe, remaining in correspondence with Jefferson, Madison and the other Founding Fathers. Mazzei published a four-volume history of the colonies, Recherches historiques et politiques sur les États-Unis de l’Amérique septentrionale (1788), and he relied on his Virginia connections for material for the book. As the first history of the American Revolution to be published in French, the book became known as a source about the truth of the American Revolution.

To kindle interest for the American cause in Italy, Mazzei translated many of Jefferson’s public speeches and letters, and he worked to improve provisions for US merchants in Italian ports. Horticultural topics never ceased. Jefferson sent him a description of his plough, and Mazzei sent him many seeds and plants.

Maria Hautefeuille Martin Mazzei died on January 10, 1788, while living with the Derieux at Colle. She is buried in the Jefferson family graveyard at Monticello.

When Jefferson returned from France in 1789, he acted with Mazzei’s lawyers in selling Colle in 1796 and lots in Richmond in 1813. Jefferson discovered, however, that he could not remit the proceeds to Mazzei because of the War with England. He managed to pay off the interest to Mazzei’s heirs, but the debt on the $7,000 principal was not settled until 1836, when the heirs instituted a suit against Jefferson’s estate.

In 1805, Jefferson requested Mazzei to commission the great Italian sculptor Canova to work on the new Capitol in Washington, DC. Instead Mazzei sent two lesser known Italian sculptors to Jefferson and wrote to the Vice President: “I thank you with all my heart… that I have the honor and privilege of being placed in a position to do something for my dear adopted fatherland.”

Mazzei never returned to America. He established himself as a gardener and retired to Pisa, Italy, in 1792. He married Antonina Tonini in 1796, and had a daughter Elisabetta in 1798. In 1802, he began to enjoy the pension paid by Alexander I of Russia, who had assumed the King of Poland’s debts after the final partition of Poland.

When Philip Mazzei died in Pisa in 1816, Jefferson recalled that “his esteem in this country was very general; his early and zealous cooperation in the establishment of our independence having acquired for him here a great degree of favor.”

After Mazzei’s death, the remainder of his family returned to the United States at the urging of Thomas Jefferson. They settled in Massachusetts and Virginia. Mazzei’s daughter Elisabetta married the nephew of John Adams.

SOURCES
Wikipedia: Philip Mazzei
All Men Are Created Equal
Italian Immigration and Settlement
Memoirs of the Life and Peregrinations of the Florentine: Philip Mazzei