Hannah Harrington, born around 1737, was one of the great women of the American Revolution. Elijah Clark (or Clarke) was born 1733 in Edgecomb County, North Carolina, and was the son of Elizabeth Darden, who was the niece of George Washington and the second wife of Governor Stephen Heard. Hannah Harrington married Elijah Clark around 1763.

In 1774, Hannah and Elijah moved to Wilkes County in upper Georgia, because of the availability of new lands. They settled in an area that became known as the Hornet’s Nest, which was several miles northwest of Fort Heard, between the roads leading from the Broad River and Cherokee Corner to Augusta. Hannah was a large muscular woman whose every movement showed efficiency.

At that time, Hannah was 37 years of age and had four small children, ranging in age from two to seven years. Hannah was a rather quiet woman usually, but when she spoke it carried a note of authority. One account states that Elijah and Hannah had a total of eight children. Their son John was twice elected Governor of Georgia, and served in that office from 1820 and 1824.

Elijah joined the militia shortly before the American Revolution, and he was elected captain. He received a wound fighting the Cherokee in 1776. The following year, he commanded the militia against Creek raiders. This was just the beginning of his military career.

When the Revolutionary War began, Elijah Clark immediately cast his lot with the colonists. He thus joined other local patriots who would leave their mark on Georgia’s history, including Stephen Heard, Nancy Hart, and John Dooly, who also resided in Wilkes County.

Unfortunately for the patriots, support for the American cause was not unanimous in upper Georgia. From the onset, backcountry Tories severely challenged Whig efforts to oust the British and secure their own government. By 1778, Tory activity in Wilkes County had intensified, especially after the quick fall of Georgia’s two most important cities, Savannah and Augusta, to the British.

On February 14, 1779, Lt. Colonel Elijah Clark was with Andrew Pickens when his force of about 300 surprised and defeated 700 Loyalists under Colonel Boyd after about an hour of fighting at Kettle Creek, Georgia. The result was a complete rout of Loyalist forces; only 270 of them escaped the battlefield alive. The battle resulted in a severe setback for the British cause in northeast Georgia. Tories nevertheless continued to plunder the countryside, terrorizing its inhabitants.

All of Georgia and most of South Carolina fell to the British in 1780. Elijah Clark and thirty men passed through the Native American lands to continue the fight in the Carolinas. As a partisan, Clark led frontier guerrillas in inflicting a heavy toll against the British and American Loyalists at Musgrove’s Mill, Cedar Springs, Wofford’s Iron Works, Augusta, Fishdam Ford, Long Cane, and Blackstock’s. Although he was not present at the battles at King’s Mountain and Cowpens, his campaigns were partially responsible for both of those major patriot victories.

In May, 1780, Augusta fell under British control, but Colonel Clark carried on resistance in the backcountry using guerilla tactics. His militia skirmished with and drove back an advance party of Loyalists from Major Patrick Ferguson’s main force at Green Spring, South Carolina on August 1, 1780.

On August 8, Clark and Colonel Isaac Shelby skirmished with Ferguson at Cedar Springs. On August 18, they again skirmished with Partisans at the rear of Ferguson’s force at Musgrove’s Mill, South Carolina where they repulsed a Loyalist attack inflicting 150 casualties and capturing 70, while sustaining only a dozen casualties themselves.

At the first siege of Augusta, Colonel Clark was part of a failed attempt to retake Augusta, Georgia. From September 14-18, 1780, he led more than 400 men in an attempt to retake Augusta. They began by approaching undetected and rebuffing two Indian attacks. On the 15th, they brought in two artillery pieces, and though they had cut off the British water supply, they had insufficient numbers to overrun the garrison. On the 18th, Clark withdrew when British reinforcements arrived.

Elijah was severely wounded. Hannah heard the news and left at once to ride fifty miles to rescue him. Hannah had with her only a man-servant and two small children – twins – but they reached the camp safely.

The attempted siege brought about a violent reaction from Loyalists, and reignited Loyalist vengeance in Georgia. Four hundred women and children were forced to flee with the troops toward North Carolina. Hannah was turned out of her home, and Elijah became a fugitive for his fierce fighting against the Tories.

Their house was burned to the ground and only one patchwork quilt was saved. Elijah sought safe refuge for his family, but Hannah would not stay in a safe retreat while her patriot husband fought battles. Hannah followed her husband from fort to fort, from camp to camp, cheering him and doing all she could for his comfort. 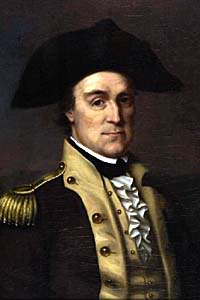 On November 20, 1780, Clark joined General Thomas Sumter in fighting Lt. Colonel Banastre Tarleton at Blackstock’s, South Carolina. The battle was a virtual draw with Tarleton preventing Sumter from threatening Ninety-Six, but losing the field and the battle to do so. Sumter was severely wounded at this action, which resulted in the dispersion of his militia.

In May 1781, Clark and Colonel Andrew Pickens began a second siege of Augusta with the support of Lt. Colonel Henry Lee and his Legion. On June 5, Augusta was finally surrendered, returning the backcountry of Georgia to Patriot control.

Hannah Clark did everything for the cause of independence except shoulder a gun and go into battle. She was at the second siege of Augusta when the British surrendered Fort Cornwallis forever to freeborn American citizens on June 5, 1781. There was rejoicing throughout northern Georgia. It had been a long and bitter struggle.

After the war, Elijah Clark remained in the militia and fought Indians on the Georgia frontier. He served in the State Assembly from 1781 to 1790, on the Commission of Confiscated Estates, and in the state Constitutional Convention of 1789. He also acted as a commissioner for Georgia’s treaties with Native American groups.

In February 1794, Clark resigned from the Georgia militia after two decades of distinguished service; he had reached the rank of Brigadier General. Around that same time, he received a French commission as a major general and began recruiting soldiers for an attack on Spanish Florida, but it never materialized.

Clark had grown impatient with the failures of the national and state government to bring peace to the frontier, and took matters into his own hands. He decided to use the recruits from the failed Florida invasion to seize Creek lands west of the Oconee River in May 1794.

With promises of land to those who would join the venture, Clark hoped to fill Creek lands with settlers before the state and federal government had time to react.

Clark established the Republic of Georgia, now known as the Trans-Oconee Republic, complete with a constitution and a committee of safety. He and his followers erected as many as six fortified settlements and elected their own officials. Many Georgians were skeptical of his dubious plan, and no more than a few hundred crossed the river.

These actions alarmed Georgia and the newly formed United States, and there was pressure to disband the community. In late September 1794, Clark vowed to defend his independent state with his life. However, when full amnesty was offered to those who would peacefully return east of the river, Clark and virtually all of his men surrendered to a force of Georgia and Federal troops sent by Georgia Governor George Mathews, and went back to their homes.

Disenchanted with a settled Georgia, discredited, and almost bankrupt, Elijah Clark died in Augusta on December 5, 1799.

Both were buried at Lincolnton, Georgia.

In 1925, the State of Georgia realized the great contributions the Clarks had rendered the State. The neglected and unmarked graves of Elijah and Hannah were located, and their remains were moved to the National Cemetery at Marietta. Amid great ceremonies, the markers were unveiled by eight of their great-grandchildren.