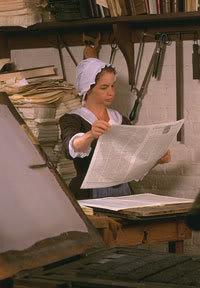 As it is for so many women in American history, there is little information about Clementina Bird Rind’s early years, except that she was born in 1740. Her husband, William Rind, was born in Annapolis in 1733, and was an apprentice there to printer Jonas Green. After a seven-year partnership with Green, the two suspended publication of the Maryland Gazette in October 1765 to protest the Stamp Act.

Shortly thereafter, Clementina Rind accepted the invitation of a group of Virginians, including Thomas Jefferson, to publish a newspaper in Williamsburg. The first issue of Clementina’s Virginia Gazette appeared May 16, 1766, under the motto: “Open to ALL PARTIES, but Influenced by NONE.”

She published the newspaper and ran a bookshop out of her home, and the assembly soon chose her as public printer to the colony, and in spite of escalating paper costs, the business prospered and its reputation grew. She received a large part of the public business, including the printing contract for the post office.

As editor, Clementina was careful to preserve the integrity pledged in the motto. The paper also began to assume its place as a literary journal of sorts, publishing not only reports of foreign and domestic affairs, shipping news, and advertisements but also essays, articles, and poems.

These items revealed Rind’s interests in scientific developments and educational opportunities, particularly with regard to the College of William and Mary. It is clear that Rind valued women as readers of her paper, for it included poetic tributes to women in acrostic or rebus form, prose, and news reporting with a feminine slant. She also included vignettes of life in European high society, in rural England, and in the other colonies.

The Williamsburg printing shop typically had a dozen technicians under the direction of a master printer. A sequence of twelve such masters ran the shop during the Colonial period, and the seventh was Clementina Rind. She was in charge of Williamsburg’s press on the eve of the American Revolution.

Rind was a Patriot, and at first she tried to publish articles on both sides of an issue, but the pro-American views in her newspaper increased, and she clearly expressed her anger over the tax on tea. When the British decided to close the port of Boston after the Boston Tea Party in 1773, Rind’s paper was no longer impartial. She delayed her edition for a day in order to publish the Virginia resolution opposing this British action as “an injury to American rights,” and began to support the people in Boston.

She reprinted articles from the North begging the colonies to send supplies to the besieged port. When it was suggested that colonies boycott all British goods, she published the names of each colony as it agreed to participate. She also published letters from London telling about the ill effects of the boycott.

When the Virginia governor warned against public meetings and signing documents against the king or parliament, Clementina published that as well as the mention of “several letters from principle gentlemen in England… who wish us to continue firm in our opposition, as the only means of redress.”

Thomas Jefferson fell ill and could not attend the First Continental Congress that met from September 5, 1774. So he wrote a talk to be read before the other delegates, entitled A Summary View of the Rights of British America. Clementina Rind printed Jefferson’s message as a pamphlet called Ideas on American Freedom on her hand-pulled press, just after Peyton Randolph read it aloud in his home to a gathering of Virginia patriots. It radicalized the Colonial cause and stirred passions, and was the embryo of the Declaration of Independence, and the first shot fired in the Revolution.

In 1774, Rind ran a notice about her poor health, and commented on the importance of free exercise of the press “in all matters which serve not the ends of corruption and malevolence.” She set forth her aim…”to revive, at all times in her power, the spirit of this paper, by a due observance of material intelligence, and a proper attention to all pieces with which she may be favored from any of her correspondents with which, if they exceed not the bounds of her gazette, and are fraught with either a decent of moral tendency, shall have the proper arrangement.”

Unfortunately, she didn’t live to see her plans to fruition. When Clementina Bird Rind died in Williamsburg in September 1774, and was likely buried beside her husband at Bruton Parish Church. She was eulogized as a lady… “loved by the muses, and fair science too… and fortitude of mind combined with the softer graces of her sex… to form a bright example of her life of editor, mistress, daughter, mother, wife.”

SOURCES
Printer and Binder
Acrostical Valentines
Printing in Williamsburg
Clementina Rind, Printer
With All the Grace of the Sex