Young George Washington began to visit Belvoir frequently. A friendship grew between the two men, despite the fact that Fairfax was considerably older. Yet a relationship also blossomed between Sally and Washington.

A romantic and emotional young man, Washington craved the company of attractive women, but he was socially handicapped by his shyness and his modest financial resources. By the time he was 25, he had fallen painfully in love several times, and on at least two occasions his proposals of marriage had been rejected.

Sally was well-educated, and as a young man with limited education and a low rung on the social ladder, George Washington was impressed with this attractive and intelligent woman. She was a key inspiration for the future President to elevate himself to a higher social, cultural, and intellectual sphere, which is clear in his letters to her.

When his brother Lawrence died in 1752, George Washington inherited the plantation next door to Belvoir, which would become Mount Vernon. Being a bachelor, the Fairfax family apparently took him under their wings. Surviving letters and diaries show that Sally taught Washington the social graces, and how to dance which became a lifelong passion for him.

The legend of the alleged love affair between George Washington and Sally Fairfax is based on a couple of letters from George Washington to Sally. The first, written while he was serving in the Forbes campaign, on September 12, 1758, is the primary source of this story:

Tis true, I profess myself a Votary to Love… I feel the force of her amiable beauties in the recollection of a thousand tender passages that I wish to obliterate, till I am bid to revive them – but experience alas! Sadly reminds me how Impossible this is.

Two years older than Washington, the slim and sophisticated Sally was the daughter-in-law of his former employer and the wife of his good friend. She was also a notorious flirt, and may not have realized how deeply she had affected the impressionable Washington.

Another of Washington’s letters to Sally leave no doubt as to the depth of his passion – and frustration – in this impossible love. Even after his engagement to another, he wrote to her pledging his devotion and declaring:

Misconstrue not my meaning; doubt it not, nor expose it. The world has no business to know the object of my love declared in this manner to you, when I want to conceal it.

Sally Fairfax is most remembered for being the woman George Washington was in love with at the time of his marriage to Martha Dandridge Custis in 1759. Martha was a short, plump, amiable woman who at the death of her first husband had become the richest widow in Virginia.

No one ever assumed that her marriage to Washington was a love match. George was anxious for money and social prestige, while Martha needed an administrator for her vast estates and a guardian for her two children. It soon became clear that she had made a wise decision in choosing Washington.

A skillful businessman, George steadily expanded Martha’s already sizable holdings. An estimated net worth of $530,000 at his death marked them as one of the wealthiest couples in America. Over the years, it appears that George and Martha developed a genuine attachment to one another.

Sally and George William Fairfax were the most frequent visitors to Mount Vernon, where George and Martha offered generous but down-to-earth hospitality. Martha, known as a homebody, took special interest in cooking and often appeared with a ring of kitchen keys tied at her wide waist.

The two couples parted company in 1773 when the Fairfaxes moved to England – George William was a Loyalist (supported the British). They had every intention of returning to America after the war was over, but Fairfax’s fortunes had been lost during the American Revolution, preventing them from ever returning. George William Fairfax died in 1787.

There were signs of regret on Sally’s part in the end. She wrote to her sister-in-law in 1788:

I know now that the worthy man is to be preferred to the high-born who has not merit to recommend him… When we enquire into the family of these mighty men we find them the very lowest of people.

Though they never had children, George Washington proved an overly indulgent stepfather to Martha’s offspring from her previous marriage. When her son Jacky died at age 27, leaving behind children of his own, George and Martha formally adopted two of his children. 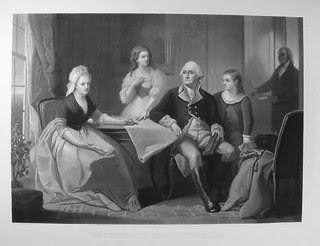 Image: George Washington And His Family
Mezzotint by William Sartain

In 1798, a year before he died, Washington wrote a final letter to Sally Fairfax, who was then a destitute widow of 68 living in London. Washington had concluded eight years as the first U.S. President and was finally able to retire to his beloved Mount Vernon.

In the letter, Washington told Sally that not all the glories of the Revolution, not even the splendors of the Presidency, had “been able to eradicate from my mind those happy moments, the happiest of my life, which I have enjoyed in your company.”

Because evidence of an affair between Sally Fairfax and George Washington is slim, there are skeptics who doubt the story. Yet the letters prove that a strong relationship between the two most surely existed. Many of the details of their relationship remain in doubt since Martha burned all all of their correspondence after Washington’s death on December 14, 1799.

Sally Cary Fairfax lived alone until her death in 1811.