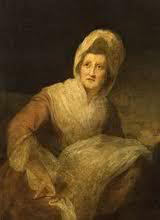 Patience Lovell was born on Long Island in 1725 to well-to-do Quakers, and moved with her family to Bordentown, New Jersey, at age four. Patience discovered her talent for sculpting at an early age. She and her sisters shaped wet flour or clay. When the sculptures were dry, they used plant extracts to paint them.

In 1748, she married Joseph Wright, an elderly Quaker farmer, who was a landowner and spent much of his time away from home taking care of his properties. Patience and Joseph had three children, and for years she amused herself and her children by molding faces out of putty and bread dough.

When her husband died in 1769, her children’s ages ranged from young adult to the unborn child she carried. At age forty-four, Patience Wright was a widow with no resources – in colonial times woman did not inherit their husband’s property – and she needed money to support the young children still living at home with her.

At the encouragement of her neighbor Francis Hopkinson – signer of the Declaration of Independence – her pastime became a full-time occupation when she began molding portrait busts in tinted wax. Her recorded works consisted of detailed, life-sized heads and hands, which were then attached to clothed figures.

Patience developed a reputation for her skill, important at a time when the only likenesses of people were painted or sculpted. Within a short time, she created a traveling waxwork exhibit featuring remarkably skillful sculptures of well-known public figures. Her wax portraits were the earliest recorded attempts at sculptural expression in the American colonies.

Her customers sat for hours while she sculpted their likenesses in wax. Typically, Wright fashioned the wax heads in her lap, concealing them under her apron while engaging her subjects and other visitors in conversation. Her work was displayed in studios in both New York and Philadelphia, and was soon in great demand.

Wright moved her family to England in 1772, and Benjamin Franklin introduced her to London society. There she created a popular exhibit of wax models of actors, politicians, nobles, and other prominent people. One newspaper reported on “the ingenious Mrs. Wright, whose Skill in taking Likeness, expressing the Passions, and many curious Devices in Wax Work, has deservedly recommended her to public Notice.”

The popularity of her work lay partly in her eccentric personality – she was said to have addressed the king and queen as George and Charlotte when they posed for her. A contemporary commented on the “vigor and originality of her conversation.”

Patience fell from royal favor because of her open support for the American Colonies. During the Revolutionary War, she opened her London home to American prisoners of war and corresponded frequently with Benjamin Franklin. It is believed that she hid secret messages in the wax sculptures that she sent to her sister, who was running a wax museum in Philadelphia. 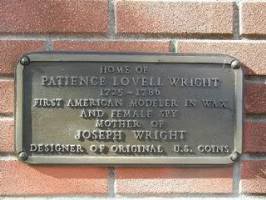 In 1780, Wright went to Paris to open a wax museum, but found little opportunity. While there, she modeled a bust of Benjamin Franklin. Her son, Joseph Wright, was a well-known portrait painter, wax modeler, and die maker; her daughter Phoebe married British painter John Hoppner.

Wright was longing to return to America and embark on a profile of George Washington. In 1783, she wrote a letter to Washington, inquiring if she would be granted an opportunity to model a sculpture of his likeness. He courteously replied he would be honored to sit for her. Unfortunately, Patience Lovell Wright died in England on March 23, 1786, before she was able to have Washington pose for her.

Considered America’s first professional sculptor, she was a uniquely independent and high spirited woman who was a friend of many prominent people of her time. Her home at 100 Farnsworth Avenue in Bordentown, New Jersey, still stands.