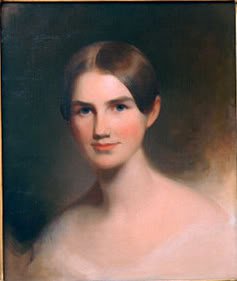 Elizabeth Blair Lee (1818-1906) wrote hundreds of letters to her husband, Rear Admiral Samuel Philips Lee, who commanded the North Atlantic Blockading Squadron during the Civil War. Admiral Lee was away for long periods as commander of the USS Philadelphia, and in her letters to him Elizabeth described wartime life from her homes at Washington, DC and Silver Spring, Maryland.

Elizabeth Blair was born on June 20, 1818, in Frankfort, Kentucky, and was the only daughter of Francis Preston Blair and Eliza Violet Gist Blair. She was the younger sister of Montgomery Blair and Francis Preston Blair, Jr. Her father was a journalist from Frankfort, Kentucky, and his editorials in support of the fledgling administration of President Andrew Jackson attracted the president’s attention.

President Jackson invited Blair to move to Washington, DC, and become editor of the pro-administration newspaper the Globe. In 1830, the Blairs and their three children moved to the nation’s capital, and they were politically active and powerfully connected from the moment they arrived.

In Washington, Elizabeth Blair blossomed into an attractive young woman. She attended Madame Adele Sigoigne’s fashionable school in Philadelphia for several years. In 1836, her father purchased a two-story brick home across Pennsylvania Avenue from the White House. In 1837, the family took up residence in the home that became known as Blair House.

Blair House was a politically significant location almost from the moment the Blair family took up residence. In his role as the publisher of the Globe newspaper, Blair lived a highly political life, and a number of presidents — including Andrew Jackson, Martin Van Buren, and Abraham Lincoln — found his advice, counsel, and insight very valuable.

During his time with the Globe, Francis Blair was part of Jackson’s informal Kitchen Cabinet, and authored numerous editorials idealizing American principles of government, which were widely reprinted in other newspapers across the nation.

In August 1839, Elizabeth vacationed at White Sulphur Springs in western Virginia, where she met a handsome young naval officer named Samuel Phillips Lee. Samuel was born at Sully in Fairfax County, Virginia, to Francis Lightfoot Lee II and Jane Fitzgerald. His grandfather had signed the Declaration of Independence.

Lee had been appointed a Midshipman in the U.S. Navy in November 1825, and subsequently saw extensive service at sea, including combat action during the Mexican-American War and exploration, surveying, and oceanographic duty.

Elizabeth Blair married Samuel Phillips Lee, third cousin to Robert E. Lee, on April 27, 1843. Throughout the 1840s and 1850s, Elizabeth’s world revolved around her husband’s career. She had anticipated the long separations that his career would necessitate, and promised to write to him every day they were apart.

In 1852, the Blairs moved back to Blair House. In 1859, Elizabeth’s father built a house at 1653 Pennsylvania Avenue for Samuel and Elizabeth next door to his own, which was then called Lee House. The two houses began to be used as one, almost as they are today.

What is today known as Blair House is in fact the combination of the original home, the Lee house, and two other townhouses. While they appear from the outside to be independent of one another, the four homes are connected internally. It is used by the President as a guest house for visiting heads of state. During a foreign leader’s stay, the flag of that leader’s nation flies over Blair House.

Image: Blair House
Moving for a time in the 1840s to a country house in Maryland, the Blairs rented this property (center) on Pennsylvania Avenue to a succession of notable tenants, including the first Secretary of the Interior, Thomas Ewing, whose daughter married William Tecumseh Sherman at the house in 1850.

Elizabeth’s brother, Montgomery Blair also lived in the residence. He served as Postmaster General under President Abraham Lincoln from 1861 to 1864, and was a trusted advisor before and during the Civil War. He counseled President Lincoln on important matters such as the reinforcing of Fort Sumter, and was instrumental in keeping Maryland out of the Confederacy.

At a conference at Blair House in 1861, it was decided that Admiral Farragut would command the assault on New Orleans. It was at Blair House that Robert E. Lee turned down Abraham Lincoln’s request to lead the Union Army; and where Presidents Martin van Buren and William H. Taft sought Blair’s counsel.

At the outbreak of the American Civil War in 1861, Samuel Phillips Lee held the rank of Commander, and was captain of the sloop of war, USS Vandalia in the East Indies. He sailed for home on his own initiative to join the blockade of the Southern coast, and was assigned to blockade Charleston. He was highly successful on blockade duty and received over a $100,000 in prize money.

Commanding his squadron more than two years, Lee’s fleet grew from 48 to more than 100 craft. In 1862, he commanded one of the three gunboats that David G. Farragut sent to run past the forts protecting New Orleans, and then to engage the Confederate fleet. He also participated in the naval action at Vicksburg.

In September 1862, Lee was made Acting Rear Admiral and assigned to command the North Atlantic Blockading Squadron, which was responsible for the blockade of the North Carolina coast and operations on North Carolina and Virginia inland waters, all areas of very active combat between Union and Confederate forces.

Lee held this job from September 4, 1862, to October 12, 1864 with his flagship the USS Philadelphia. He was successful at this, in part because he intercepted ships that got through the primary blockade by stationing another cordon of ships out at sea.

But because Secretary of the Navy Gideon Welles did not consider him to be aggressive enough, he was sent in 1864 to command the Mississippi Squadron, where he performed well in supporting the campaign of General George H. Thomas against the troops of General John Bell Hood along the Cumberland and Tennessee rivers. He led that command until the end of the Civil War in 1865. His flagship during this time was the USS Black Hawk.

The Letters
The hundreds of letters Elizabeth wrote to her husband during the war described life at Washington and their country home at Silver Spring, Maryland. They illuminate the functioning of a nineteenth-century family, and Mrs. Lee’s unique perspective on the political and military affairs of the nation’s capital. An intelligent and astute woman, she was keenly interested in the events of the day. Living just across the street from the White House, she was also acquainted with many of the nation’s most influential men and their families.

Elizabeth wrote to her husband in June 1861:

Whilst we in the family circle were talking – Mr. [Simon] Cameron arrived – said he had no family – no dinner – and knew where he wanted to come and enjoy both. The table was consequently enlarged – it was hardly fixed when Fremont drove up – and ere fixing was quite done – Governor Sprague and a Rhode Island reinforcement came – now the whole table was cleared off and enlarged…

Lincoln is a good true man and is doing a good work for his country and earning great renown for himself. His cool way of doing things will I hope teach the Blairs a lesson not to rush at things or people so violently.

Montgomery Blair was not a popular member of Lincoln’s cabinet. He was a cantankerous cuss and was despised by many. But he had one advantage – the good relations of Mary Todd Lincoln with the Blair family. She was particularly close to Elizabeth Blair Lee, to whom she wrote three months after the assassination: “Remember me most truly, to your brother, Judge [Francis] Blair, your dear father & mother & all friends.”

In the course of their 54-year marriage, Elizabeth Lee penned thousands of letters, which were thoughtfully saved by her husband and preserved by their descendants. The correspondence offered not only an intimate picture of the Lee household, but also a “direct and immediate account of life during the United States’ greatest crisis.”

Reverting to his permanent rank of Captain after the war, Samuel Phillips Lee had extensive service in the Washington, DC area. He was promoted to Full Rear Admiral in 1870 and retired from active service in February 1873. He then moved to the family home in Silver Spring, Maryland, where he died on June 7, 1897.

Elizabeth Blair Lee died on September 13, 1906, and is buried with her husband in Section 1 of Arlington National Cemetery.