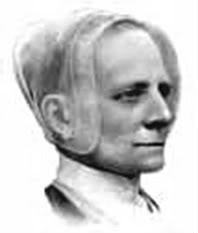 Women in Religion: Leader of the Shakers

The second of eight children, Ann Lee was born on February 29, 1736, in a poor district of Manchester, England, known as Toad Lane. Her father John Lee was a blacksmith whose meager income barely fed his family. Except for a parish church record of her baptism in 1742, very little is known of Ann Lee’s childhood.

Since education for a girl of Lee’s station was out of the question, she was illiterate and found employment in the textile mills of Manchester. By her twenties, she was serving as a cook in the public infirmary and madhouse. Lee exhibited a religious bent early in life, found living in the crowded industrial city difficult.

In the midst of the moral decay she witnessed in the city, Ann developed an early revulsion for sex. In time, she would incorporate those feelings into her analysis of human sinfulness. Ultimately, she became convinced that the sexual act was the original sin of Adam and Eve and that lust is the root of all evil.

In 1758, Lee found the spiritual refuge she had been looking for when she joined a religious society led by former Quakers, Jane and James Wardley. The Wardley Society, or as it was then called, the Shaking Quakers, had many things in common with the Quakers (Society of Friends) founded by George Fox, such as the reliance upon “inner light” for the revelation of spiritual truth.

Like those of the Quakers, the meetings of the Wardley Society started out with a period of silent meditation during which the “seeker” awaited the prompting of the Holy Spirit. Next, the worshippers openly confessed their sins, and were soon carried away with violent shaking, singing, shouting, and dancing, primarily by the women. Among the Shaking Quakers, Ann Lee experienced a sense of belonging.

On January 5, 1762, Ann’s father coerced into marrying his blacksmith apprentice, Abraham Standerin, who did not easily accept Lee’s resolve to remain celibate. But neither argumentation nor priestly intervention enabled him to thwart his wife’s intention to be the “bride of Christ.”

A simple and good man, Standerin was hardly compatible with his stubborn wife, but over the next several years Lee gave birth to four children, all of whom died in infancy or early childhood. These events left Ann Lee deeply disturbed and assaulted by guilt, but Standerin did not leave her. He stayed and joined the Shakers himself.

Ann Lee’s suffering after the death of her children lasted for nine years. During one of several imprisonments, Lee received the vision which Shakers came to regard as the birth of their movement. During her time with the Wardleys, Lee was jailed on several occasions for disturbing the peace. The bizarre form of Shaker worship inspired suspicion and hostility in their neighbors. The Shakers had a habit of interrupting local congregations during services by bursting into their services and railing against their the church and accusing married couples of whoredom.

During a lengthy incarceration in 1770, Lee saw the “grand vision of the very transgression of the first man and woman in the Garden of Eden, the cause wherein all mankind was lost and separated from God.” It was further revealed to her that she was the female successor to Jesus, the incarnation of the second coming of Christ, and from then on referred to herself as Mother Ann.

Ann Lee emerged from this experience with the status of a martyr within the society, and the undisputed new leader of the sect. As Mother Ann, she boldly proclaimed her gospel at every opportunity: life with God begins by confession and is perfected by denial of the lusts of the flesh through celibacy.

Some years earlier, Ann had been enthralled by a description of the spiritual awakening in the American colonies. In view of the restrictions faced by the Shakers in England, the prospect of creating a community in a new country was very attractive.

John Hocknell, one of the few Shakers of material means, booked passage to New York for Lee and her eight disciples on board the ship Mariah. After a voyage of three months, the first Shakers arrived in New York harbor on August 6, 1774. During the two years they worked there to save money, Lee’s marriage to Abraham Standerin disintegrated. He left her, and she never heard from him again.

By 1776, revolutionary fever was raging in the city, and war with the British was imminent. Because they were newly arrived from England, because of their strange customs and their lack of enthusiasm for the patriot cause, the Shakers were accused of being Tories (British sympathizers). Actually the Shakers supported neither side – they were pacifists and had little interest in the outcome of the war.

It was time for the Shakers to leave the city. John Hocknell purchased a tract of wilderness land near Albany in upstate New York, which offered the remote location desired by the sect. After a few months of clearing the land, Ann and the others took up residence at Watervliet, New York, and began creating the first Shaker community. 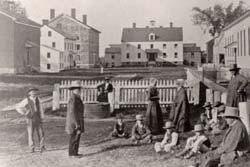 Since a number of new converts were from the New England colonies, Lee and her two leading disciples, William Lee and James Whittaker, went on a preaching mission throughout Connecticut, Maine, and Massachusetts. In May of 1781, they set out on horseback on a tour that would last more than two years. This mission was of tremendous importance to Shaker history. With the town of Harvard, Massachusetts, serving as home base, several new communities were established throughout New England.

Unfortunately the mission was marred by repeated acts of mob violence in which several Shaker leaders were horsewhipped. Ann herself was dragged out of a dwelling and thrown into a carriage to be “shamefully and cruelly abused.”

When Ann finally returned home to New York on September 4, 1783, the violence of the New England mission had left both her and her brother in a weakened condition. Neither fully regained health. William Lee, the first of the original Shakers to die, “passed into the world of spirit” on July 21, 1784.

After the death of her beloved brother, Ann Lee lost all interest in the world around her. She died on September 8, 1784, a year after the New England trip. Her final days had been spent sitting in her rocking chair “singing in unknown tongues.” Her disciples buried her in a simple wooden coffin, after a rousing Shaker celebration of her life and her passing into the realm of spirit.

In spite of her convictions concerning celibacy, which doomed the Shakers to eventual extinction, Ann Lee was in many ways a progressive 18th-century woman who made a significant impact on her world. She was a pioneer for justice and equality. She taught by example the equality of the sexes, economic justice, religious tolerance, and true democracy.

The Shakers in America lived a communal life based on common ownership of property and goods, celibate purity, and confession of sins. The Shakers did not believe in procreation and therefore had to adopt children or allow converts into their community. The adopted children were given a choice at age 21 whether to remain with the Shaker community or go their way into the world. The Shakers eventually created 19 official communities in the Northeast, Ohio, and Kentucky. The Shaker faith spread to include roughly 6,000 members just before the Civil War.