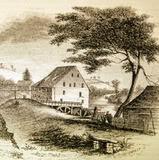 Image: Shadwell Plantation
Home of Jane and Peter Jefferson and birthplace of Thomas Jefferson. On February 1, 1770, a fire destroyed the plantation house, and Thomas Jefferson built a substantial, but smaller dwelling for his mother Jane and his siblings at Shadwell, which then became part of the Monticello Plantation. The mill at Shadwell (pictured left) began to operate after the canal that enslaved men had worked on for so many years was finally completed. Moses, a slave hired from Caroline County, was the miller.

According to the Jefferson family bible, Jane Randolph was born February 20, 1720, in Shadwell Parish, London. The parish register of St. Paul’s notes her baptism on February 25, 1721, as the daughter of Isham Randolph, mariner of Shakespeare’s Walk, and Jane Rogers Jefferson. The Randolphs left London shortly thereafter, and were in Virginia by October 1725, when Jane’s sister, Mary, was born in Williamsburg.

Jane Randolph came from a leading Tidewater family, and had a noble bloodline ranging back to various locations in England and Scotland. Family lore held her as descended from various European royalty ranging as far back as Charlemagne.

The first record of Jane’s presence in Virginia is her marriage to Peter Jefferson on October 3, 1739, in Goochland County, probably at her parent’s home on the James River, called Dungeness. There is no evidence that Jane brought any land or servants to the marriage. Isham provided her a dowry of 200 pounds, but it wasn’t paid until his death, three years later.

Peter Jefferson, a self-educated jack of all trades, moved from the Tidewater to the sparsely populated Piedmont in his youth, where he made a name for himself as a cartographer and surveyor. He had a hand in establishing the border between North Carolina and Virginia, and his prominence in affairs of state later led to his appointments as sheriff, colonel, and ultimately, representative to the House of Burgesses.

From the 1730s through the 1770s, Shadwell Plantation – the birthplace of Thomas Jefferson – was home to Jane and Peter Jefferson, their eight children, over sixty slaves and numerous hired workers. The archaeological and documentary evidence reveals that Shadwell was a well-appointed gentry house at the center of a highly structured plantation landscape during a period of Piedmont settlement that scholars have traditionally classified as frontier, and the Jeffersons in fact accommodated in their house, landscape, material goods, and behaviors what was the most up-to-date of Virginia’s elite Tidewater culture.

In 1744, the Jefferson family relocated from Shadwell to the nearby Tuckahoe estate in order to live with a wing of Jane Randolph Jefferson’s family. A private tutor was hired and a family schoolhouse erected to serve the purposes of educating the Jefferson and Randolph children.

In 1757, Peter Jefferson died unexpectedly at the age of fifty, leaving their house and the Shadwell Plantation to Jane, who suddenly found herself a widow at thirty-seven, and young Thomas the “patriarch” at fourteen, with six sisters and a younger brother.

In his will, Peter Jefferson endowed his eldest son Thomas with the majority of holdings upon reaching the age of twenty-one. But for the next seven years, his inheritance, including 2500 acres and over 20 slaves, would be managed by several guardians, and Thomas would feel ill-at-ease under the watch of his newly widowed mother.

Soon after his father’s death, Thomas Jefferson became a boarder under the care of Reverend James Maury at Maury’s home near Charlottesville, not far from Shadwell. Maury was also at this time a tutor to Jefferson’s friend and later brother-in-law Dabney Carr, and later provided an education to James Monroe.

During the two years that Jefferson stayed with Maury, he traveled home on weekends to help his mother and siblings in the upkeep of the Shadwell estate. However, at age sixteen, Jefferson made a cleaner break with his family when he made the 150-mile journey to the Tidewater center of Williamsburg in order to begin studies at the College of William and Mary.

Though Williamsburg was a more cosmopolitan and populated area than the Piedmont, it hardly qualified as a college town, much less a thriving metropolis. In 1760, when Jefferson arrived at Williamsburg, the town consisted of one thousand residents, and the college of three buildings and seven faculty members.

Thomas Jefferson was admitted to the bar in 1767. In the next few years, he initiated a successful law practice in Williamsburg, winning established clients all across Virginia. He also made various real estate deals to improve the holdings he had already inherited.

Having come of age, and with the Shadwell estate firmly under his control, Jefferson began to level land on a nearby mountaintop in order to build his own country home, which would eventually materialize into the shape of Monticello. And while the foundation for Jefferson’s dignified mansion was just being poured, the foundations of Jefferson’s rise to prominence as a statesman were already solidified.

Although much of the main house at Shadwell burned in 1770, Jane continued to live there. Family relations were tense until her death, mere months before Jefferson authored the Declaration of Independence.

On March 31, 1776, Jane Randolph Jefferson died prematurely of a stroke. Thomas Jefferson wrote a flat unelaborated entry in his journal: “My mother died about 8 o’clock this morning, in her fifty-seventh year of age.” Not a word about her admirable traits or what she had meant to him.

Although Jefferson had endured a troubled relationship with his mother from adolescence onward, the loss must have stung deeply nevertheless. Her death apparently triggered deep mixed feelings in Jefferson, and he was laid up for over a month by one of the disabling migraine attacks he regularly suffered in times of personal upheaval.

The lone reference to his mother in Jefferson’s correspondence can be found in a June 1776 letter from him to his uncle William (Jane’s brother), a merchant in Bristol, England. Among a host of other issues, Jefferson writes to William: “The death of my mother you have probably not heard of. This happened on the last day of March after an illness of not more than an hour. We suppose it to have been apoplectic.”

The lack of sources leaves a number of outstanding questions about Jane, such as whether she died at Monticello rather than at Shadwell (her late-nineteenth century tombstone states the former). Certainly, any attempt to recover the real Jane Jefferson has been concealed by fanciful assumptions about the kind of person she was.

Family accounts reveal that Jane Randolph Jefferson controlled her family’s resources with a level of care, skill, and prudence that may have chafed her oldest son’s spending habits, yet which also kept the family out of debt, a considerable achievement in eighteenth-century Virginia.