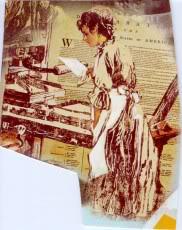 Mary Katherine Goddard (1738-1816) is famous for printing the first copy of the Declaration of Independence that included the names of all the signers. Like her younger brother William, Mary Katherine was educated by her mother, Sarah Updike Goddard, who taught them Latin, French and the literary classics. Mary Katherine’s father, Dr. Giles Goddard, was postmaster of New London, Connecticut, and the family was living there when Dr. Goddard died in 1757, leaving a sizable estate.

William Goddard completed an apprenticeship in the printing trade, and when he came of age, the family moved to Providence, Rhode Island, where Sarah Goddard lent her son the money to begin a printing business – the first in that colony. Both mother and daughter also began their careers as printers there in 1762, when Mary Katherine was 24.

Although the younger William was supposedly in charge, he traveled a great deal, and it was Sarah Goddard who was the true publisher of the Providence Gazette and Country Journal. The first issue was produced in October 1762. Mary Katherine took a great interest in the business, and gave up the usual activities for young ladies to work as a typesetter, printer and journalist.

The mother/daughter team made their print shop a hub of activity at a time when newspapers exerted great political influence. They added a bookbindery, and in addition to the Gazette printed almanacs, pamphlets and occasionally books.

William left for Philadelphia in 1765, where he began another print shop and began publishing the Philadelphia Chronicle and Universal Advertiser, again with financial assistance from his mother. Sarah and Mary Katherine joined him there in 1768 and helped run the newspaper.

After Sarah Goddard’s death in 1770, Mary Katherine kept the business running, because William was frequently jailed for public outbursts and controversial articles in the newspaper.

In May 1773, William started another newspaper in Baltimore, the Maryland Journal and Baltimore Advertiser, once again bringing a young city its first ever newspaper. The paper was extremely popular and quickly became one of the best papers in the colonies.

Mary Katherine ran the Philadelphia business until the following February, when the Philadelphia Chronicle was discontinued. Moving to Baltimore, she once more took over her younger brother’s newspaper and ran it while William set up a colonial postal system.

Mary Katherine Goddard finally assumed the title of publisher of the Maryland Journal and Baltimore Advertiser. She put “Published by M.K. Goddard” on the masthead on May 10, 1775, and ran the newspaper singlehandedly from 1775 to 1785.

The year 1775 brought a second milestone, when Mary Katherine Goddard became the first postmistress in Baltimore and in colonial America, a position she held for 14 years. Being both postmistress and a newspaper printer often enabled her to publish news more quickly than her competitors – the Journal was one of the first newspapers to report the skirmishes at Lexington and Concord that prompted the Revolutionary War.

Newspapers were becoming essential forms of communication, and their numbers quickly doubled as colonists turned to them to spread revolutionary ideas and keep up with the quickly developing conflict. Unlike her brother, who used the paper to promote his own opinions, Mary Katherine used a more objective and professional tone.

During the war, inflation hurt the printing business, so she ran a bookbindery to supplement her income and accepted food from those who couldn’t afford to pay their subscription to the paper.

Not everybody appreciated the newspaper, however. In May of 1776, Mary Katherine complained to the Baltimore Committee of Safety about threats and abuse she was receiving. Troublemakers wanted to control what she was printing. A radical group called the Whig Club were constantly harassing Mary Katherine and threatening her.

Members of this club raided her offices twice. They were threatening to run Mary Katherine out of state but she appealed to the legislators in Annapolis, who were in favor of freedom of the press. The Whig Club was censured and eventually banned by the State Assembly.

Mary Katherine never missed an edition of the paper, while many other papers did during the American Revolution. On July 12, 1775, she printed a 3 column account of the Battle of Bunker Hill. It was less than a month after the actual battle had occurred, which was considered a scoop at that time.

During times of confusion about whether the colonial or the revolutionary government was in control of Baltimore, she also kept the mail going by occasionally paying post riders with her own money.

As we know, independence was declared in Philadelphia on July 4, 1776, and John Hancock led other members of the Continental Congress in signing the handwritten document. By doing so, these men were declaring treason against the established government, and they would have been executed had they been caught.

While the Founding Fathers went on to the fame she had literally thrust upon them, Mary Katherine Goddard sank into obscurity. William was never able to become successful at any occupation, and was jealous of his sister’s success.

In 1784, Mary Katherine’s name disappeared from the Journal, and William most likely forced his sister to quit, and she filed five lawsuits against him. She sold her interest in the paper in 1785, severing all ties with the newspaper she had helped found and had run solely for so many years.

In 1789, the Postmaster General decreed that the head of the Baltimore Postal system must be a man. This news shocked more than Mary Katherine herself. The entire city was in an uproar. Two hundred Baltimore men, including the governor of Maryland, signed a petition to retain her position. They cited that her service was impeccable and appealed to the senate to reinstate her in the job.

Mary Katherine herself also wrote an appeal to President George Washington, complaining that she had been removed from office without cause. He declined to intervene in the state’s decision and in October of 1789, she was officially relieved of duty.

Mary Katherine stayed in Baltimore and ran the bookshop she had begun as an adjunct to the printing business. She was an energetic and popular personality in Baltimore and she maintained her bookshop there for 20 years, until 1810, when she retired, having been a trailblazer in both printing and the postal service.

Mary Katherine Goddard died in Maryland on August 12, 1816, at the age of 78, a woman of achievement who had taken an important stand for freedom of speech and the rights of women in the young United States. She is buried in the graveyard of the historic St. Paul’s Parish.

A copy of the Declaration of Independence that she printed is at the Maryland Hall of Records.