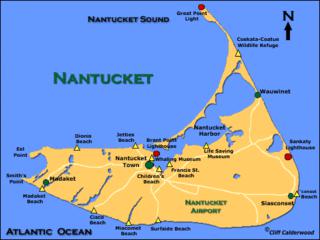 Mary Coffin Starbuck was born February 20, 1645 in Haverhill, Massachusetts, just two years after her parents’ arrival from Devonshire, England. Ten men got together and planned the purchase Nantucket Island, off the Massachusetts shore. Mary’s father, Tristram Coffin was the leader of the group — along with Edward Starbuck, Thomas Macy, and Isaac Coleman – and the purchase took place in 1659. He took his family to the island in 1660, where he was Chief Magistrate in 1671 and Commissioner in 1675.

In 1662, Mary married Nathaniel Starbuck, a prosperous farmer, local official, and partner with her father in purchasing the area from the Indians. The son of Edward and Catherine (Reynolds) Starbuck, Nathaniel was born February 20, 1634 in Dover, New Hampshire. Mary was eighteen when her first child was born – the first white child born on the Island of Nantucket. From this family all of the Starbucks of America are descended.

For several years, Town Meetings were frequently held in the “great fore-room” of her home, which became known as “Parliament House.” John Richardson an early Quaker preacher said of her, “The Islanders established her a Judge among them, for a little of moment was done without her advice.” She held religious meetings in her home, being herself a Quaker preacher of power and eloquence.

The population of Nantucket in 1700 was approximately 300 whites and 800 Indians. Short of specie and wanting loyal suppliers, traders advanced up to ten pounds of cloth, fish hooks, shoes, shot, kettles, and more in exchange for feathers and fish – and Mary’s company store was born. The use of the credit system depended on the courts allowing the Indians to be sued for debt. Mary’s book shows accounts for as many as 200 Indians, who were primarily engaged in codfishing and fowling but were also performing routine manual labor, and later whaling. In return for their efforts, they received necessary tools, cloth, and supplies.

Mother of ten children, of whom five daughters and three sons lived to maturity, Mary and her eldest son Nathaniel helped make Quakerism the leading religion on the island sometime after her own conversion from Puritanism by the Quakers – the Society of Friends – at Providence, Rhode Island, in 1701 at the age of 56.

Quakerism in Early Nantucket
The Society of Friends (Quakers) was the first religious group to formally organize on the island. Mary Starbuck and her husband Nathaniel led the Quaker movement on Nantucket. The Nantucket Meeting was formed in 1708, with Mary serving as an elder and her son Nathaniel Jr. as clerk. Mary became the first recognized minister among the islanders.

The first meetings were held in the Starbuck home. Englishman John Richardson wrote of a meeting at which Mary “Spoke trembling… Then she arose, and I observed that she and as many as could well be seen, were wet with Tears from their Faces to the fore-skirts of their Garments and the floor was as though there was a Shower of Rain upon it.”

“The islanders esteemed [Mary Starbuck] as a judge among them, for little was done without her, as I understood,” Richardson wrote. [She was a] “most extraordinary woman, participating in the practical duties and responsibilities of public gatherings and town meetings, on which occasion her words were always listened to with marked respect.”

Mary, who became known as “Great Mary of Nantucket,” was a woman of great power and influence. She was consulted upon all matters of public importance, because her judgment was superior, and she was universally acknowledged to be a great woman.

The Quakers on Nantucket were strong politically and financially; many were involved in the lucrative whaling industry. They were in the majority for most of the eighteenth century, and their devotion to simplicity and strict adherence to traditional ways influenced Nantucket’s architecture, home furnishings, clothing, and social behavior.

Quakerism gradually became the dominant religion of Nantucket’s ruling elite and a majority of island residents during the most prosperous days of the whaling industry. It effectively served as the official faith of the small maritime community that would become the whaling capital of the world.

Although the first Meeting house on Nantucket was built in 1711, Mary did not live to see the official Nantucket Monthly Meeting be established. Mary Coffin Starbuck died on Nantucket Island November 13, 1717, at the age of seventy-two. Fittingly, her body was laid to rest in the Friends’ burial ground next to the new meetinghouse built on land donated by her son and the Nantucket proprietors.