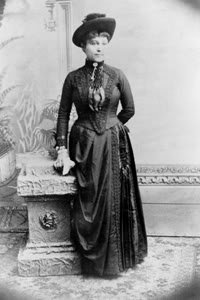 Amanda America Dickson, the daughter of a slave and her white owner, became one of the wealthiest black women in nineteenth-century America. She was born on November 20, 1849, on the plantation of her father, the famous white agricultural reformer David Dickson in Hancock County, Georgia. Amanda’s birth was the product of Dickson’s rape of his twelve-year-old slave, Julia Frances Lewis Dickson. At the time, he was forty and the most prosperous planter in the county.

According to the Dickson family oral history, David Dickson doted on his mixed-race daughter, and Julia quite openly became his concubine and housekeeper. Though she remained legally enslaved until 1864, Amanda received a lady’s upbringing, including beautiful dresses, lessons on good manners, cultivated speech, and playing the piano. Everyone on the Dickson plantation called her ‘Miss Mandy.’

In 1866, Amanda married her father’s white nephew, Charles Eubanks, a recently returned Civil War veteran. The union produced two sons: Julian and Charles. The marriage ended, and she moved back to her father’s plantation, where he doted on his grandchildren. At that time, she and her children took the last name of Dickson.

From 1876 to 1878, Amanda left the plantation to attend the Normal School of Atlanta University. In the winter of 1885, David Dickson died, leaving the bulk of his estate to Amanda, and subsequently to her children after her death.

Executors appraised the estate, which included 17,000 acres of land in Hancock and Washington counties, at $309,000. In his will, David Dickson stated that the administration of his estate was to be left to the sound judgment and unlimited discretion of Amanda Dickson without interference from any quarter, including any husband she might have.

Many of David Dickson’s white relatives contested the will, but the superior court of Hancock County ruled in favor of Amanda Dickson in November 1885. The disgruntled relatives then appealed to the Georgia Supreme Court, which upheld the lower court decision in 1887.

With her fortune safely in her possession, Amanda bought a mansion in Augusta, where she settled with her mother and sons. While white Georgians were establishing segregation as the ruling social order in the public sphere, members of the Dickson family went about their private lives.

Amanda Dickson lived a quiet life in Augusta, where she preferred private acts of charity to organized racial uplift. In 1892, she married a wealthy, light-skinned freedman, Nathan Toomer. The constantly precarious state of Amanda’s health during her marriage points toward a strained relationship.

On July 11, 1893, Amanda died of neurasthenia, a nineteenth-century disease of the well-to-do that resembled what is now termed Chronic Fatigue Syndrome – utter psychic and physical exhaustion.

She died intestate, but her father’s will had stipulated that Amanda, and her children after her death, were the beneficiaries, and no future husband or Dickson family member could interfere. The inheritance included $100,000 to each son and part of the remaining $247,000. One son inherited the Dickson plantation; the other divorced, moved to California.

Amanda America Dickson was buried in her wedding dress, in a metallic coffin, which was lined in rose colored plush fabric. The funeral was held at Trinity Colored Methodist Church. Her life reflected the power of family and class to erode the boundaries of race in the nineteenth-century South.

Kent Anderson Leslie’s 1995 biography, Woman of Color, Daughter of Privilege: Amanda America Dickson, 1849-1893, was written about her life, and from this book came the 2000 film, A House Divided, starring Sam Waterston and Jennifer Beals as David and Amanda Dickson.