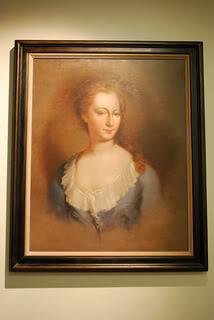 Susannah Beverley was born about 1692 and became the wife of Sir John Randolph about 1718 – there are no records of the exact dates. If she was 26 at the time of her marriage, she was rather mature for a colonial bride. Her eldest sister was the wife of her husband’s eldest brother, which may suggest how they met. Whatever the uncertainties, there is no doubt that Sir John found her to be an excellent mate, or that she reared children of unusual ability.

In almost two centuries of colonial Virginia history, there was only one woman who had a certifiable claim to the title of Lady – Susannah Beverley Randolph. Courtesy, of course, bestowed the honor of lady on every woman of the better sort, and certainly most of the middling class. But she was the wife of Sir John Randolph, the only Virginian knighted from the day Roanoke Island was settled in 1585 until independence was declared in 1776.

Prestigious Virginia Family
The Randolphs were the most powerful clan in 18th-century Virginia. Sir John Randolph was the only colonial-born Virginian to be distinguished with knighthood, the most accomplished lawyer in the colony, and a public servant of the first rank. He was a man of integrity and patience who had great concern for impartiality and the rule of law.

Susannah brought to her marriage a connection to a family nearly as distinguished. Her kinsmen had been high government officials and prominent planters. One had written a history of the colony in 1705 that was still in print 242 years later.

Children
Though records are spotty, it appears that she bore her first child, a son named Beverley, about 1720. Peyton, named for his maternal grandmother’s family, was born in 1721. John, known to historians as “The Tory,” but sincerely respected by his contemporaries, was born in 1727 or 1728. Her only daughter, Mary, followed, but the year of her birth is uncertain.

Apart from her children, Susannah Randolph had charge of a domestic establishment that was among Williamsburg’s largest and best, and there were three plantations, at least one of which had houses of some sort that may have required her management. Her husband’s position required frequent and fine entertaining of clients and associates, an activity that also required her attention.

Sir John’s obituary in the Virginia Gazette stated: “As he received a noble Income, for Services in his Profession and Employments, so he, in some Measure, made a Return, by a most generous, open and elegant Table… But the Plenty, Conduct, and Hospitality, which appeared there, reflect an equal Praise on himself and his Lady.”

Young Widow
Widowed in 1737, Susannah was entrusted with a share in the supervision of her husband’s estate for the benefit of their children and for herself. When Sir John penned the portion of his will specifying his bequests, he began with “my dear and most beloved wife who for her faithfulness affection and prudence deserves to be remembered in the first place.” She was given the use of his property in Williamsburg for her life, after which it would pass to Peyton Randolph.

In the care of the estate, she had the assistance of her two brothers-in-law, but she seems to have been quite capable of acting for herself. In 1740, after the family’s tobacco inspection and warehousing facilities on nearby College Creek expanded, she petitioned the General Assembly for an increase in the rents. Her petition was granted.

Life in Williamsburg Society
After Sir John’s death, Susannah Randolph still moved in Williamsburg’s social circle and remained the object of the considerate attention of the friends she and her husband had shared. Among them was William Byrd II, who was a member of the colony’s Council and General Court, the master of Westover plantation on the James River.

Byrd and his wife were old friends, and his diaries record visits to the Widow Randolph many evenings when business carried him to the city. Sometimes she sent a carriage to meet him at the ferry. They played cards, drank tea, or merely visited. In the words of a Colonial Williamsburg historian, Byrd had “special ties of affectionate concern for her welfare, and pleasure in her company.”

By 1751, perhaps earlier, Susannah had the company of son Peyton and his wife as well. In 1745, when he was entitled to his share in the income of his father’s estate, he married Betty Harrison. Peyton may have lived with his mother all along, but by 1751 the house was referred to as if it were already his, suggesting that he was in residence and in charge.

The records of Bruton Parish Church show that Lady Susannah Beverley Randolph had two slaves baptized in 1754. It is her last appearance in the historical record. Neither the date of her death nor the place of her burial is known.