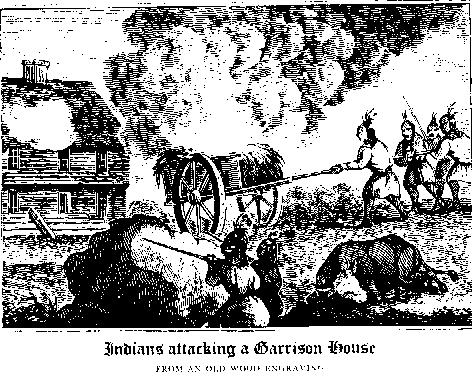 Elizabeth Hull, daughter of Reverend Joseph Hull, was born in 1626 in England, and married Captain John Heard at York, Maine in 1642. Soon after their marriage, they settled at Dover, New Hampshire. The leader of the colonists at Cochecho (near Dover) was Richard Waldron (Walderne), an Englishman who had emigrated in 1635. In 1642, Waldron owned a large tract of land at the Lower Falls of the Cochecho River where he built a sawmill. That spot became the foundation of the settlement known as Cochecho.

In 1652, Captain John Heard had grants of land “under the Great Hill of Cocheco,” and he and Elizabeth built their house on the brow of the Great Hill.

By 1666, a total of 41 families lived and worked there. Indians became a familiar sight around town when Richard Waldron opened a large trading post, but there were occasional problems with the Indians, because Waldron was not above breaking the laws that forbade selling liquor or firearms to Indians.

For over half a century following Dover’s founding in 1623, the English settlers had co-existed peacefully with the local Pennacook tribe. The Indians helped the colonists to develop the fishing, hunting, and farming skills necessary to survive in New England.

The Indian chieftain, Passaconaway, was responsible for forming the Penacook confederacy, a unification of local tribes against the hostile Mohawks. Passaconaway’s 50 year reign marks one of the most peaceful periods in the New Hampshire province. His son Wonalancet took over leadership of the tribe in 1665 and continued his father’s peaceful ways.

In 1676, many Indians fled Massachusetts due to bloody fighting between a confederation of Indian tribes and English settlers. By September, over 400 Indians were at the Cochecho settlement. Half of them were strangers, the other half were Wonalancet’s people. Two companies of Massachusetts soldiers arrived to recapture the escaping Indians. They were ready to fight the Indians, but Major Waldron intervened.

Elizabeth Heard saved the life of a young Indian boy that day by concealing him until his would-be slayers had left her house, and then helped him to escape.

For the next eleven years, tensions mounted between the settlers and the Penacook Indians. The peaceful Chief Wonalancet was replaced by the warlike Kancamagus, who bitterly resented the injustices meted out by English settlers to his people. More and more land was seized from the Indians for paltry payments like a “peck of corn annually for each family.”

In 1684, the Governor ordered that the meeting house at Dover be fortified against Indian attacks. Every neighborhood developed at least one fortified blockhouse where people could flee to safety if Indians attacked.

Five homes at the Cochecho settlement were garrisoned at public expense, including Elizabeth Heard’s, which became known as Heard’s Garrison. These five sites were chosen because of their locations on the highest knolls of the town. The garrisons were built with foot-thick squared logs impenetrable to bullets and a second story that projected over the lower story by two to three feet.

This overhang feature was designed to combat Indians who customarily attacked with fire or smoke. A loose board in the overhang could be removed in order to pour boiling water on marauders or on fires below. Each wall also had narrow slits for firearms. The garrisons were also surrounded by an eight foot palisade of large logs set upright in the ground.

The settlers at Cochecho became frightened by the large number of hostile Indians now living with the local tribe. The settlers took refuge at the blockhouse each night, and during the day, guns were kept close to hand in the fields.

Advance word that the Pennacooks were massing for an attack on Cochecho was known as far away as Chelmsford, Massachusetts. The vendetta against Waldron was described in a warning letter from Chelmsford. Waldron, aware of the tensions, reportedly laughed it off, telling his townsfolk that he could assemble 100 men simply by lifting his finger.

On the evening of June 27, 1689, several Indian women asked for shelter at each of the garrison houses, a common practice in peacetime. They were shown how to open the doors and gates in case they wanted to leave in the night. No watch was kept as all the Cochecho families retired for the night.

During the early hours, the Indian women quietly opened the gates to several hundred Pennacook. Waldron, then 74, is said to have wielded his sword in defense. He was tied to a chair and cut across the chest repeatedly as each warrior symbolically “crossed out” his trading account with the distrusted merchant. Waldron was forced to fall on his sword, the garrison was burned, and his family killed or captured.

Elder William Wentworth was guarding the Heard property while Elizabeth was away. He was awakened by a barking dog and managed to close the gates against attack. Elizabeth Heard – by then a widow – her three sons, her daughter, and their families were all returning from their voyage to Portsmouth with the dawn tide. The smell of smoke and the chilling sound of Indian cries alerted them to their peril. Mrs. Heard was so overcome with fright that she could not go on. She pleaded with her family to flee for their lives, and they left her hidden in some nearby bushes.

As daylight broke, an Indian spotted Elizabeth in the thicket. He raised his gun and aimed it at her. He stared hard at her face, then silently ran away, never revealing her to his tribesmen. In a curious twist of fate, Elizabeth Heard had saved the life of this Indian in 1676. He had never forgotten her kindness and took this opportunity to repay the favor.

Mrs. Heard remained hidden in the thicket until all the Indians had left Cochecho. She wearily returned to her home expecting to find burnt ruins. Thanks to her courageous neighbor, William Wentworth, she found her home and family intact.

Several years passed before Cochecho fully recovered. Houses and mills were rebuilt, but the loss of so many persons (about 25% of the population) was a severe blow to the settlement’s prosperity. By 1700 however, the town had begun to resume its former importance. Although Cochecho was occasionally harassed by Indians, it was never again the target of so destructive a raid.