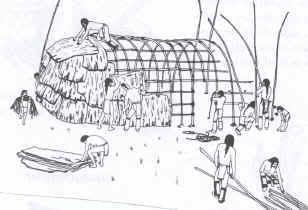 Blandina Kiersted was born in 1653, and was the daughter of Sarah Kiersted, a translator for the Lenape sachem (leader), Chief Oratam, in what is now New Jersey. Blandina learned the Lenape language from her mother, and also acted as an interpreter.

Lenape Life
The Lenape made dome-shaped houses called wigwams where a small family or individual could live. They pushed a circle of poles into the ground and then bent them over one another to make a domed frame, which they covered with sheets of bark, skins or woven rush mats. Several families sometimes lived together in a larger longhouse, still rounded on top, but longer. Inside the longhouse were platforms of poles on either side that could be used as seats or beds. Down the center was a row of fires to share. Openings in the roof let the smoke out. Corn and herbs were hung high in the roof, and there was room to store other goods beside the doorway.

Blandina Kiersted married Petrus Bayard, a nephew of Peter Stuyvesant, on November 4, 1674, and they had five children – two boys and three girls. Petrus Bayard died in 1690.

Blandina Bayard was a trader with the Lenape Native Americans, and under English law, as a widow, she controlled her own money and property. Blandina’s mother, Sarah Kiersted, encouraged her daughter to take advantage of the current trend of Land Fever.

On August 10, 1700, Blandina Kiersted Bayard purchased from the local Hackensack Indians (the local Lenape tribe) a sizeable area of land – about 12 miles by 16 miles – encompassing what is now Mahwah, Oakland, and Franklin Lakes in Bergen County, New Jersey.

The Deed
The surviving deed of sale shows that 15 Hackensack men and 4 Hackensack women participated in the sale, though land ownership was not a concept the Lenape recognized. In return for the land, the Lenape received “divers good causes and several kindnesses,” as well as “sundry goods and wares,” valued at 120 Pounds.

Blandina improved the land and settled there, and in doing so, she became the first white landowner. She planned to establish a homestead and a pioneer farm – two decidedly male-dominated activities – in the foothills where the Ramapo Mountains slope down to the Ramapo River.

Bayard built a house on the Ramapo River, in what is present-day Mahwah, which also served as a trading post.
The Lenape called it Mawewi – the meeting place of rivers and paths. Though she probably didn’t live full-time on her land, she hired her daughter-in-law law Rachel Bayard and her nephew Lucas Kiersted to run the trading post.

I, Blandina Bayard, of the city of New York, widow. I leave to my eldest son, Samuel Bayard, £25. To my daughter Sarah all my wearing apparel of woolen and linen, and one of my beds and furniture and £12 in money to make her a silver tankard when she is of age or married.

Whereas by a certain deed of Partition, made on the 13 day of June, 1699, between my eldest son, Samuel Bayard, and his heirs and assigns and myself, whereby I do in conscience judge before God he has had a sufficient part of the estate of his father, Petrus Bayard, my late husband deceased; therefore I have thought best to give all my estate, both real and personal, to my dear and well beloved son, Petrus Bayard, and to my dear and well beloved daughter, Sarah Bayard.