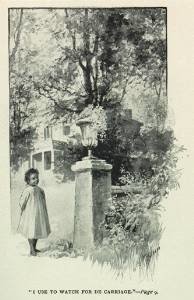 Letitia Burwell was born on a plantation in Virginia and spent most of her life in the rural regions of that state. Her book, A Girl’s life in Virginia Before the War (1895), records her memories of the antebellum South. Burwell’s descriptions of life on the plantation are filled with pastoral scenes of a wealthy Virginia family engaged in the daily pleasures of their time.

Burwell recalls tales and stories passed down from neighbors and family members that she feels epitomize the quality of life in the South. She tells of social dances, food, the relationships that her family had with their slaves and life among family members.

She defends the South against the criticism by outside observers. Burwell also observes that in some ways life in the antebellum South, even for slaves, was better than life in many parts of England, France and the rest of the world.

Her book contains an engrossing eyewitness account of antebellum plantation life. The author, whose family had been in Virginia for over a century, offers a lively description of the relations between master and slave in response to the alleged lies published in the North before, during and after the War concerning the treatment of slaves in the South.

Excerpt from A Girl’s Life In Virginia Before The War, which illustrates how deluded some Southerners were:

Confined exclusively to a Virginia plantation during my earliest childhood, I believed the world one vast plantation bounded by Negro quarters. Rows of white cabins with gardens attached; Negro men in the fields; Negro women sewing, knitting, spinning, weaving, housekeeping in the cabins; with Negro children dancing, romping, singing, jumping, playing around the doors, – these formed the only pictures familiar to my childhood.

The master’s residence – as the Negroes called it, “the great house” – occupied a central position and was handsome and attractive, the overseer’s being a plainer house about a mile from this. Each cabin had as much pine furniture as the occupants desired, pine and oak being abundant, and carpenters always at work for the comfort of the plantation. Bread, meat, milk, vegetables, fruit, and fuel were as plentiful as water in the springs near the cabin doors.

Among the Negroes – one hundred – on our plantation, many had been taught different trades; and there were blacksmiths, carpenters, masons, millers, shoemakers, weavers, spinners, all working for themselves. No article of their handicraft ever being sold from the place, their industry resulted in nothing beyond feeding and clothing themselves.

My sister and myself, when very small children, were often carried to visit these cabins, on which occasions no young princesses could have received from admiring subjects more adulation. Presents were laid at our feet – not glittering gems, but eggs, chestnuts, popcorn, walnuts, melons, apples, sweet potatoes – all their “cupboards” afforded – with a generosity unbounded. This made us as happy as queens, and filled our hearts with kindness and gratitude to our dusky admirers.

Around the cabin doors the young Negroes would quarrel as to who should be his or her mistress, some claiming me, and others my sister. All were merry-hearted, and among them I never saw a discontented face. Their amusements were dancing to the music of the banjo, quilting parties, opossum-hunting, and sometimes weddings and parties.

Many could read, and in almost every cabin was a Bible. In one was a prayer-book, kept by one of the men, a preacher, from which he read the marriage ceremony at the weddings. This man opened a night school – charging twenty-five cents a week – hoping to create some literary thirst in the rising generation, whose members, however, preferred their nightly frolics to the school, so it had few patrons.

Our house servants were numerous, polite, and well trained. My mother selected those most obliging in disposition and quickest at learning, who were brought to the house at ten or twelve years of age, and instructed in the branches of household employment. These small servants were always dressed in the cleanest, whitest, long-sleeved aprons, with white or red turbans on their heads.

No establishment being considered complete without a multiplicity of these, they might be seen constantly darting about on errands from the house to the kitchen and the cabins, upstairs and downstairs, being, indeed, omnipresent and indispensable.

It was the custom for a lady visitor to be accompanied to her room at night by one of these black, smiling “indispensables,” who insisted so good naturedly on performing all offices – combing her hair, pulling off her slippers, etc. – that one had not the heart to refuse, although it would have been sometimes more agreeable to be left alone.

The Negroes were generally pleased at the appearance of visitors, from whom they were accustomed to receive some present on arriving or departing; the neglect of this rite being regarded as a breach of politeness. The old Negroes were quite patriarchal, loved to talk about “old times,” and exacted great respect from the young Negroes, and also from the younger members of the white family. We called the old men “Uncle,” and the old women “Aunt,” – these being terms of respect.

The atmosphere of our own home was one of consideration and kindness. The mere recital of a tale of suffering would make my sister and myself weep with sorrow. And I believe the maltreatment of one of our servants – we had never heard the word “slave” – would have distressed us beyond endurance.

We early learned that happiness consisted in dispensing it, and found no pleasure greater than saving our old dolls, toys, beads, bits of cake or candy, for the cabin children, whose delight at receiving them richly repaid us. If any of the older servants became displeased with us, we were miserable until we had restored the old smile by presenting some choice bit of sweetmeat to the offended one. At such establishments one easily acquired a habit of being waited upon, there being so many servants with so little to do.

The Negroes made pocket-money by selling their own vegetables, poultry, eggs, etc. – produced at the master’s expense, of course. I often saw my mother take out her purse and pay them liberally for fowls, eggs, melons, sweet potatoes, brooms, shuck mats, and split baskets. The men made small crops of tobacco or potatoes for themselves on any piece of ground they chose to select.

Smiling faces always welcomed us home, as the carriage passed through the plantation, and on reaching the house we were received by the Negroes about the yard with the liveliest demonstrations of pleasure. It was a long time before it dawned upon my mind that there were places and people different from these. The plantations we visited seemed exactly like ours. The same hospitality was everywhere; the same kindliness existed between the white family and the blacks.