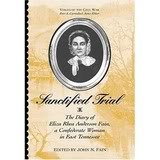 In her diary, Eliza Fain tells the history of the Civil War as it happened at Rogersville in northeastern Tennessee, an area that was sharply divided in its loyalties to the Union and the Confederacy. She tells of soldiers stopping by their home, deaths and the Battle at Big Creek. The originals of the twenty-eight volumes that comprise Fain’s diary – almost 1,000,000 words – were discovered eighty years after her death.

Eliza Rhea Anderson was born at Blountville, Tennessee, on August 1, 1816, to Elizabeth Rhea and Audley Anderson. Eliza’s father died when she was two, leaving her mother with little alternative but to seek refuge for herself and her family with her brother. In 1832, Eliza’s mother married Nicholas Fain, and eighteen months later, Eliza married her step-brother, Richard Fain.

A merchant, banker and president of the Rogersville and Jefferson Railroad, Richard Fain was part of the emerging commercial-professional elite of East Tennessee. The couple owned a two-hundred-acre farm two miles east of Rogersville, Tennessee, where Eliza raised thirteen children.

Eliza Fain kept a diary for more than 50 years – from age 19 until nine days before her death at age 75. She encouraged her children to follow the dictates of evangelical Protestantism and to be proud of their Southern heritage. The Fains owned eight slaves, four of whom were under the age of twelve at the beginning of the Civil War.

Fain’s husband and five of her six sons fought for the Confederacy in a sharply divided East Tennessee. Fain was a consistent supporter of the Confederacy, while many of her neighbors were equally ardent Unionists. This diary is unique for its account of increasing clashes with Unionist ‘bushwhackers’ and for its graphic description of the atrocities on both sides.

The Civil War surged around Rogersville, near the Fain farm, with alternating occupation by both North and South. When her farm was looted in 1865, Fain attempted to defend her family and home from both Yankee troops and guerrillas. Overall, however, she focuses on her family and how the war affected them and their neighbors, and her diary reveals the challenges of everyday life a century and a half ago.

In January 1861, Eliza’s husband and sons donned their uniforms of gray and headed off to defend the Confederacy. Richard Fain served as colonel of the 63rd Tennessee Infantry Regiment, which was stationed in Knoxville for much of 1862.

Unlike most elite white women, who rarely wrote in depth about slavery or its connection to the war effort, Eliza wrote extensively on the ‘moral plan’ that Southerners had for their slaves – and the northern quest to corrupt these noble endeavors. She regarded the war as a religious battle between God-fearing Southerners and an enemy who had abandoned God. Slavery, Eliza believed, was the cornerstone of the war effort – the very reason her kin had pledged to fight and die for the cause.

How little they [Northerners] know of the deep anguish many of us feel in regard to our servants for their immortal souls. And I do feel the judgments of Almighty God will rest upon the heads of the Northern people for their unjust interference, thereby thwarting our plans for the elevation of our colored people in a moral point of view.

Eliza frequently visited the army camp, and she used this time with her husband and sons to impress upon them their Christian duty to defend and honor the South. A religious compass, she declared, would guide the soldier and the Confederacy to victory.

I am becoming more firmly fixed in my conviction concerning this war that religion will be more intimately interwoven in its history than any which had ever preceded it. The men who have honored God are the men he has chosen to honor on almost every field.

When a band of Federal soldiers passed her home in October 1863, she challenged them to reflect upon their motives to wage war:

They have to acknowledge that slavery has been the inciting cause to this war! [Yet] they all tell me if they thought they were fighting to free the Negro they would quit and go home.

Unable to fight for her cause, Eliza used her Bible as a weapon against passing Federal troops. She gave religious tracts to raiding Yankee soldiers in the hope that the Lord would “impress the precious truth which they contain on the minds of those to whom given,” thereby weakening the northern resolve to fight.

In January 1863, her ailing husband informed her that he would soon resign from his post and return home. The news made Eliza anxious and depressed. “I do feel could he stand the service I do not want him to resign if he is useful to his country as I hope and believe he is,” she wrote on January 23, but Richard left the army anyway.

By June, Eliza received the news that her son Nick and nephew Sam had been captured by Federal troops and sent to Johnson’s Island prison in Ohio. Unable to find out anything certain, she spent months in a “state of suspense” over her loved ones, while eking out a wartime existence replete with shortages and military uncertainty.

Yesterday General [John Crawford] Vaughn and cousin Jimmie Rhea took dinner with us. They with other officers of the Brigade had taken a ride to look out a more pleasant place for an encampment, went and surveyed around the ebbing and flowing spring, do not know what conclusion they came to. General V. is a very pleasant man plain and unassuming. I think he is a good man. May he put his trust in that God who is able to deliver… After dinner Kit Spears came – was on his way home – from the army at Dalton. He does not look well.

Rogersville was occupied by Confederate General James Longstreet‘s army from November 1863 until April 1864, and for the rest of the year the town lay on the border between the two armies, and was subject to raiding parties of violent guerillas. On more than one occasion, the ruthless bands left Eliza contemplating her “great want of provisions.”

Fain bore the loss of food and other goods with stoic heroism, but watched in disbelief at the demise of the domestic institution she had so staunchly defended. As her own slaves abandoned their posts for the safety of the Union lines, Eliza could not face the harsh reality that the “sacred relationship” binding master and slave may have been a one-sided affair.

Instead, she worried about the moral welfare of the “poor, infatuated Negroes,” whom she believed had been falsely lured by northern promises of freedom:

He leaves a home of plenty, and I may say, peace and happiness,” she wrote sadly. “He goes to them, they take the deluded victims and in most cases put them in squads of 20 or 30 with an overseer to work out a miserable existence… with a tenfold severer infliction of punishment than he has ever known in his Southern home.

When one of Eliza’s last house slaves left in April 1865, she lamented that the young girl had not informed her of her impending departure, as she would have “given her something for her journey.” Eliza had no feelings of unkindness for the “deluded girl,” whom she believed had “started upon a life of trial such as she had never known before.” Eliza conceded that perhaps the Lord had allowed the North to rule over her former servants in a grand plan to make them “more humble and better slaves.”

Eliza Fain bore defeat with the same Christian resignation. She cried bitter tears when her husband Richard took the oath of allegiance to the United States and applied for a pardon, which was granted by President Andrew Johnson in October 1865. In brief moments of despair, she questioned why “a God of truth, of love should permit such a people to overcome us.”

As Confederate family and friends fled East Tennessee in the wake of Radical – and often violent – Republican rule, Eliza searched for meaning in a world turned upside down by war. She concluded that the Lord had “pour[ed] out his wrath upon the South on account of the amalgamated race who have been born in a state of slavery.”

Clinging to her Christian resolve, Eliza Fain faced a hard postwar life shaped by poverty. Unable to sustain his family by farming, Richard worked as a clerk for his prosperous cousin. Three of her daughters died of consumption during the 1870s, and three sons left East Tennessee.

Fain’s entries from the period of Reconstruction reveal her concerns about perceived threats from poor whites and freed slaves. She never abandoned the Southern cause, but instead resigned all things to the will of God. Her submission allowed her to negotiate her way through defeat without sacrificing her deeply held beliefs on race, class and gender.

The Fain family relocated to Mossy Creek, Tennessee, in the late 1870s, where Richard died in 1878.