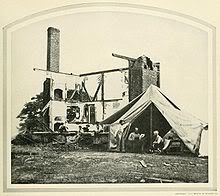 At first, Americans viewed the Civil War romantically, as a great adventure. To many, it was a crusade of sorts that would be decided quickly, and would return both the North and South to a peaceful way of life, either as one nation or two. But events near the small Virginia community of Manassas Junction would change all that.

Image: Ruins of Henry House after the Battle of Manassas

The importance of the First Battle of Bull Run, or Manassas as it was generally known in the South, lay not so much in the movement of the armies or the strategic territory gained or lost, but shocked the nation into the realization that the war might prove longer and more costly than anyone could have imagined – not only to the armies, but to the nation as a whole.

On July 21, 1861, the first major confrontation of the opposing armies took place on the fallow fields of widow Judith Carter Henry’s farm, claiming almost 5000 casualties. Among the victims were not only the dead and wounded soldiers but members of the civilian population, and the wide-eyed innocence of a nation suddenly realized it had gone to war with itself.

The two armies converged and on July 21 a heavy battle took place starting at 5:30 a.m. The Union was winning when fresh Confederate reinforcements arrived by train and pushed the Union line back into what was called the Great Skedaddle.

One person who gained fame from this battle was Thomas Jonathon Jackson who stood firm on Henry House Hill during a raging battle, and forever after became the great Stonewall. Two Confederate generals, Barnard Bee and Francis S. Bartow, were rallying their troops when Bee exclaimed, “There is Jackson standing like a stone wall: Rally behind the Virginians!”

As the battle started, townsfolk came by carriage, horseback or walked to an area overlooking the battlefield. There they spread blankets and brought picnic lunches to watch the war. What they saw was a brutal battle. Some of the fiercest fighting took place on Henry House Hill.

On Sunday, July 21, 1861, Judith Carter Henry, her daughter Ellen and hired colored girl Lucy Griffith were living at Henry House. John, one of Mrs. Henry’s sons, had ridden down from Loudoun just to spend the day.

When the battle began on the opposite hill, artillery shots were coming threateningly near. The family first considered trying to move Mrs. Henry, 85 years old and bedridden, to Portici, the home of Robert Lewis, one mile southeast of the Henry home. But in the growing confusion, that was out of the question.

There was a spring house to the southwest in a depression that seemed less exposed. They carried Mrs. Henry there, only to have her beg to be taken back to her own bed. This was done as soon as they realized that the spring house was no safer than the dwelling.

While the Henrys were gone, Confederate snipers had taken up hiding positions in the home. In an attempt to dislodge the Confederate sharpshooters in the house, Union Artillery Captain James B. Ricketts turned his guns and shelled the house.

A shell hit Judith Henry’s bedroom and the bed on which she lay was shattered. She was thrown to the floor, wounded in the neck and side, and one of her feet was partially blown off. Ellen Henry sought refuge in a big fireplace chimney during the bombardment, and her subsequent deafness was attributed to injury to her eardrums from the violent concussion produced by the shelling.

Judith Carter Henry died later that afternoon, the first civilian casualty of the Civil War, and was buried in the garden she loved.