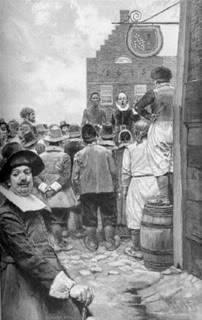 The Rise of Slavery

Slavery under Dutch Rule
Slavery began in New Netherland as it did in other colonies, because there was an acute labor shortage. Even imported white indentured servants, who contracted to serve for a certain period of time were hard to obtain. The alternative for the farmer or the large householder was to purchase slaves.

In 1626, a ship carrying 11 male slaves sailed into the harbor at New Amsterdam. Only four of the names of the first slaves in New York are known for certain: Paul d’Angola, Simon Congo, Anthony Portuguese, and John Francisco. Their names indicate that they were probably taken from Spanish or Portuguese slave ships captured at sea. They were immediately put to work by the Dutch West India Company – building roads, cutting timber, clearing land and helping construct a major fort at the southern tip of Manhattan.

For the next 38 years, until the British took over New Netherland in 1664 and renamed it New York, the Dutch slowly increased the numbers of slaves in the colony. Some slaves were imported directly from Africa, but the Dutch officials preferred to buy slaves who had been seasoned by a few years of living in the West Indies. By then, they had gotten used to working as slaves, had picked up some of the new language, and in many cases had contracted and survived a bout with the killer disease smallpox, thus becoming immunized.

Most of the Dutch who came to America sought to pile up money in the lucrative fur trade and then hurry back to the comforts of Holland to enjoy their wealth. So the Dutch West India Company (DWIC) increasingly turned to slaves, which it already was importing in vast numbers to its Caribbean colonies.

Slave Work
From its stations in Angola, the DWIC imported slaves to New Netherland to clear the forests, lay roads, build houses and public buildings, and grow food. It was company-owned slave labor that laid the foundations of modern New York, built its fortifications, and made agriculture flourish in the colony, so that later white immigrants had an incentive to turn from fur trapping to farming.

As a result, the West India Company relaxed its monopoly and allowed New Netherlanders to trade their produce to Angola and “to convey Negroes back home to be employed in the cultivation of their lands.” The company was willing to forego profit for the sake of spreading slavery in New Netherland, and getting the colony settled. It even allowed private owners to exchange slaves they were dissatisfied with for company slaves.

The steady flow of slaves from various sources allowed the colony to stabilize and, by 1640, to expand its agricultural output. Slavery helped to prepare the way for this transition by providing the labor that made farming attractive and profitable to the settlers. Slave labor was especially important in the agricultural development of the Hudson Valley, where an acute scarcity of free workers prevailed.

Slaves worked in the fields alongside their owners, and many of them worked their way into more skilled jobs as craftsmen, such as shoemakers, blacksmiths and woodworkers. Female slaves also did outside work, but more often were used as household servants.

The work of the slaves was varied. Agriculture commanded the largest number of African Americans, but slaves performed all kinds of skilled and unskilled labor. They cut stone, made barrels, worked as blacksmiths, manned fishing boats and whaling ships. African American women were involved in the same complex domestic economy as white women, as well as in agricultural work and domestic service.

The economic status of slaves in New Netherland contrasted with the malignant and sometimes bizarre racism of the religious British citizens who followed the Dutch into the north Atlantic colonies. Free blacks in New Netherland were trusted to serve in the militias, and slaves helped to defend the settlement during the desperate Indian war of 1641-44. Blacks and whites had equal standing in the courts, and free blacks were allowed to own property. They intermarried freely with whites, and in some cases owned white indentured servants.

Slavery under English Rule
Beginning with the introduction of 11 black slaves into New Netherland in 1626, the number of slaves in New Netherland grew to almost 20,000 on the eve of the Revolutionary War, a century and a half later.

New York had the most slaves in the North, and Long Island had almost half of them. The island had the largest slave population of any rural or urban area in the north for most of the colonial era. For almost two centuries, New York was a slave colony and Long Island was a slave island.

Slaves were widely scattered about the thinly populated countryside. So the daily family life of a Long Island slave was markedly different from his or her counterpart in the South, where large groups of blacks in separate slave quarters could at least share their religion, culture and social life, often with their own family members.

Because an owner usually had few slaves, married slaves were often forced to live apart, seeing each other only occasionally. They received little education. Many slaves converted to Christianity, and one of their few rewards was being allowed to go to church on Sunday.

By 1698, there were 2,130 blacks in New York, almost all of them slaves, more than in any colony north of Maryland. Almost half of them were on Long Island. And one out of five Suffolk County residents was black, virtually all of them slaves. Their daily life was regulated, both by the needs of their owners and by laws of the colony.

The first major slave law came in 1702, titled An Act for Regulating Slaves. No person could trade with a slave without permission of the slave’s master or mistress. Owners could punish their slaves at their own discretion, though they were not allowed to take a slave’s life or sever a body part.

Slaves could not carry guns. Except when working for their owners, slaves could not congregate in groups larger than three, with whipping the penalty, up to 40 lashes. Towns could appoint a public whipper, who would be paid up to three shillings for each slave whipped.

New York Slave Codes
While the Dutch took an almost casual approach to the treatment and control of the slaves that were imported into the colony after 1626, everything changed after the British took over in 1664, and named the colony New York. The British not only stepped up the importation of slaves into America, they passed a series of slave codes regulating slavery that made it harsher and more brutal. The slave codes dictated how the slaves could live. The rules covered marriage, slaves congregating, court protection, family life, ownership of property, bearing of arms, and many other aspects of daily life.

Under the 1702 law, a slave who assaulted or struck any free Christian man or woman was subject to prison for up to 14 days, as well as reasonable corporal punishment. No slave could give evidence in any court, except against other slaves who were plotting to run away, kill their master or mistress, burn their houses and barns, or destroy their corn or their cattle.

A 1706 law allowed Negro, Indian, and Mulatto slaves to be baptized as Christians, pointing out that this would not automatically free them from slavery. The law also stated that any child born of a slave woman would carry the slave status of the mother, apparently a reference to a child whose father was either a free black or a white slave owner.

The brutal murder of an entire family in Newtown (now Elmhurst) in January, 1708, led to a capital punishment statute against slaves later that year. A farmer named William Hallett, his pregnant wife and their five children were ax-murdered in their sleep by their two slaves, an Indian man named Sam and an unidentified black woman, apparently in the belief that they would fall heir to the property. They were arrested and found guilty at trial. They were executed in front of a large public gathering nine days after the murder, the woman burned at the stake, the man hanged. Two other black men were hanged as accessories.

In response, the Colonial Assembly on Oct. 20, 1708, passed An Act For Preventing the Conspiracy of Slaves. The law said that any slave who killed or conspired to kill anyone who was not black or a slave would be subject to execution. The owner of the executed slave would be reimbursed by the colony up to 25 pounds sterling.

As the years went by and the numbers of slaves increased, new laws were passed, piling on more restrictions. The selling of oysters in New York by slaves was banned. The selling of rum and other strong liquors to slaves was prohibited. A 1712 law said that even freed slaves could not own property, reversing the Dutch law. And a slave could not own a gun, or even use a gun except with the permission of his master.

Local laws on Long Island also curtailed slave movements. In 1732, the Town of Brookhaven forbade slaves to be out at night except on an extraordinary occasion. In 1734, one report in Hempstead said that 10 slave men had been imprisoned for being unseasonably in a frolic. And in 1757, Smithtown passed a law that no Negro be found without a pass from his master.

Chattel Slaves
Slaves were chattel, pieces of property that could be bought, sold, rented out and moved around at the will of the owner. They could be bequeathed to heirs. And even taxed. A 1702 law laying out sources of income for the colonial government listed import duties on black slaves along with mackerel, salt, barrel staves and cocoa nuts. The children of slaves automatically belonged to their owners.

As the colonial period came to an end, on the eve of the Revolutionary War, slavery remained a potent force on Long Island. In the 1771 census, Kings County had 3,623 people, and almost one-third of them were black, most of them slaves. Queens had 10,980 residents, one-fifth of whom were black. Suffolk County by then had the largest population on Long Island – 13,128, and 11 percent were black.

At that time, there were only faint stirrings of distaste for the slavery system on Long Island. It would take a revolution, the formation of a new state government, and the increase of abolitionist sentiment before New York State, the largest slave state in the North, would give up the institution of slavery.