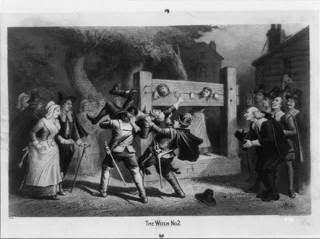 Murder may be the surest ticket to the death chamber in Connecticut today, but 350 years ago, witchcraft was the crime most likely to result in a death sentence. Connecticut made witchcraft a capital offense as far back as 1642.

Between 1647, when Alice Young of Windsor was hanged for witchcraft, to 1663, when the state’s taste for executing suspected witches began to wane, Connecticut convicted and executed more witches than anywhere else in colonial America. At least seven suspected witches were executed during that time.

Thirty-three persons are known to have been accused of witchcraft during the latter half of the 17th century when the witchcraft delusion swept Connecticut, eleven of them are believed to have been executed.

Witchcraft in Wethersfield
Founded in 1633 by a group of Puritans led by John Oldham, Wethersfield has its niche in history as “Ye Most Ancient Towne” in Connecticut, as set out by the Code of 1650 — Colonial Records of Connecticut. Four witch trials and three executions for witchcraft occurred in that town in the 17th century.

Mary Johnson was convicted at Wethersfield and executed in 1648, and the Carringtons were hanged in 1651. Landowner Katherine Harrison was convicted, and although her conviction was reversed, she was banished from the colony, and her property was seized by her neighbors.

John and Joan Carrington
John Carrington, a carpenter, came to America with his first wife Mary, and settled in Wethersfield prior to 1643. He and his second wife Joan were charged with witchcraft at a court held on February 20, 1651. The Carringtons were of roughly middle age.

Thou art indicted by the name of John Carrington of Wethersfield, carpenter, that not having the fear of God before thine eyes thou hast entertained familiarity with Satan, the great enemy of God and Mankind; and by his help has done works above the course of nature, according to the laws of God and the established laws of this common wealth thou deservest to Dye.

The same court, time, and place, found an indictment against Joan Carrington with the same verdict. Both were convicted of witchcraft on March 6, 1651, and sentenced to death.

Joan and John Carrington were hanged at Hartford in 1651, the second known execution for witchcraft in New England.

SOURCES
The Capital Crime Was Witchcraft
When Connecticut Hanged Witches