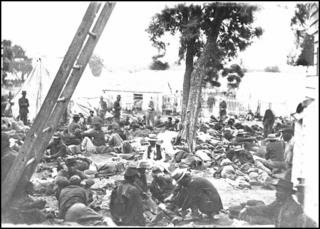 Helen Louise Gilson was a native of Boston, but moved in childhood to Chelsea, Massachusetts. She was the niece of the Honorable Frank B. Fay, former Mayor of Chelsea, and she was his ward. Mr. Fay took an active interest in the Union cause during the Civil War, devoting his time, his wealth and his personal efforts to the welfare of the soldiers.

Beginning in the autumn of 1861, Gilson’s uncle Frank Fay went in person to every battle in which the Army of the Potomac fought. He went promptly to the battlefield and moved gently among the dead and wounded, soothing those who were parched with fever, crazed with thirst, or lying neglected in the last agonies of death.

Helen Gilson was greatly influenced by her uncle’s selfless work and wanted to assist him. She applied to Dorothea Dix, the Superintendent of Female Nurses. She was rejected because she was too young, but that did not prevent her from fulfilling her desire to minister to the sick and wounded.

Gilson was allowed to work directly with her uncle and his assistants. They had their own tent, formed a tight-knit group, and even created something of a home life. She was present at almost every great battle of the Army of the Potomac, except the first Battle of Bull Run.

In the summer of 1862, Gilson was for some time attached to the Hospital Transport Service, and was on board the ship Knickerbocker at White House and at Harrison’s Landing, Virginia during the severe battles of McClellan’s movement from the Chickahominy to the James River, called the Peninsula Campaign.

When not more actively employed, she sat by the bedsides of the suffering men. She sang for them and knelt beside their beds amid all the agonizing sights and sounds of the hospital wards. She exerted a remarkable influence over the wounded soldiers.

The Auxiliary Relief Corps
The United States Sanitary Commission had been established in 1861 to care for sick and wounded soldiers, but they had no field agents, and did not attempt to care for the wounded until they were brought to the field hospitals.

In 1863, Mr. Fay took to the Sanitary Commission his plans for an Auxiliary Relief Corps, which would give personal relief to the wounded soldier in the field, and to help him bear his suffering until he could be seen by a surgeon or be transferred to a hospital. For less serious wounds, the Corps would furnish the necessary dressings and attention.

The Sanitary Commission adopted these plans, and made Mr. Fay chief of the Auxiliary Relief Corps. He served in that capacity until December 1864, when he resigned, but he continued his independent work until the war ended.

Helen Gilson collected supplies and arranged for the transportation of wounded soldiers. She obtained a contract from the government to make army clothing, and kept soldiers’ wives and daughters busy raising money so she could attract more workers by paying a better wage than other contractors.

Gilson always shrank from publicity in regard to her work, but thousands witnessed her ability to evoke order out of chaos, and providing for thousands of sick and wounded men where most people would have been completely overwhelmed.

From the reports of the Sanitary Commission, the following passage refers to her:

Upon Miss Gilson’s services, we scarcely dare trust ourselves to comment. Upon her experience we relied for counsel, and it was chiefly due to her advice and efforts that the work in our hospital went on so successfully. Always quiet, self-possessed and prompt in the discharge of duty, she accomplished more than anyone else could for the relief of the wounded, besides being a constant example and embodiment of earnestness for all. Her ministrations were always grateful to the wounded men, who devotedly loved her for her self-sacrificing spirit. Said one of the Fifth New Jersey in our hearing, “There isn’t a man in our regiment who wouldn’t lay down his life for Miss Gilson.”

But Gilson’s crowning work was performed during the last series of battles in the war, the Overland Campaign. Fought entirely in Virginia, from the Battle of the Wilderness to Spotsylvania Court House to Cold Harbor to Petersburg to Appomattox, this campaign was marked by almost a year of constant fighting, and ended the most destructive war of modern times.

Gilson took the field with Mr. Fay at the beginning of the campaign, and was tireless in her efforts to relieve the suffering caused by those horrible battles in May of 1864, in which the dead and wounded were numbered by scores of thousands.

Caring for the Colored Troops
Not until the battles of June 15 through June 18 of 1864 had there been any considerable number of the colored troops among the wounded of Army of the Potomac. In those engagements and the actions immediately around Petersburg, they suffered terribly. The wounded were brought rapidly to City Point, where a temporary hospital had been provided.

This is a description of this hospital given by Dr. William Howell Reed, who was associated with Miss Gilson in its management:

It was, in no other sense a hospital, than that it was a depot for wounded men. There were defective management and chaotic confusion. The men were neglected, the hospital organization was imperfect, and the mortality was in consequence frightfully large. Their condition was horrible. The severity of the campaign in a malarious country had prostrated many with fevers, and typhoid, in its most malignant forms, was raging with increasing fatality.

These stories of suffering reached Miss Gilson at a moment when the previous labors of the campaign had nearly exhausted her strength; but her duty seemed plain. There were no volunteers for the emergency, and she prepared to go. Her friends declared that she could not survive it; but replying that she could not die in a cause more sacred, she started out alone.

A hospital was to be created, and this required all the tact, finesse and diplomacy of which a woman is capable. Official prejudice and professional pride was to be met and overcome. A new policy was to be introduced, and it was to be done without seeming to interfere. Her doctrine and practice always were instant, silent, and cheerful obedience to medical and disciplinary orders, without any qualification whatever; and by this she overcame the natural sensitiveness of the medical authorities.

A hospital kitchen was to be organized upon her method of special diet; nurses were to learn her way, and be educated to their duties; while cleanliness, order, system, were to be enforced in the daily routine. Moving quietly on with her work of renovation, she took the responsibility of all changes that became necessary; and such harmony prevailed in the camp that her policy was vindicated as time rolled on.

The rate of mortality was lessened, and the hospital was soon considered the best in the department. This was accomplished by a tact and energy which sought no praise, but modestly veiled themselves behind the orders of officials. The management of her kitchen was like the ticking of a clock—regular discipline, gentle firmness, and sweet temper always. The diet for the men was changed three times a day; and it was her aim to cater as far as possible to the appetites of individual men.

Her daily rounds in the wards brought her into personal intercourse with every patient, and she knew his special need. At one time, when nine hundred men were supplied from her kitchen (with seven hundred rations daily), I took down her diet list for one dinner, and give it here in a note, to show the variety of the articles, and her careful consideration of the condition of separate men.

Unparalleled Service
Through all the war, from the Seven Days’ conflict on the Peninsula in those early July days of 1862, through the campaigns of Antietam, Fredericksburg, Chancellorsville and Gettysburg, and the fierce battles that were fought for the possession of Richmond and Petersburg in 1864 and 1865, Helen Gilson labored on until the end.

Through scorching heat and bitter cold, in the tent or on the open field, in the ambulance or in the saddle, through rain and snow, under fire on the battlefield, or in the more insidious dangers of contagion, she worked quietly, doing her part with all womanly tact and skill, until she finally rested, with the sense of a noble work done, and with the blessings and prayers of the thousands whose sufferings she has relieved, or whose lives she has saved.

As was the case with nearly every woman who cared for the sick and wounded, Helen Gilson suffered from malarious fever. As often as possible, she went home for a short time to rest and regain her strength, and it was those brief intervals of rest that enabled her to remain at her post until several months after General Lee’s surrender ended the war.

Helen Louise Gilson finally left Richmond in July 1865, and spent the remainder of the summer at a quiet retreat on Long Island, where she partially recovered her impaired health. In the autumn, she returned to her home in Chelsea, Massachusetts.