Advocate for the Soldiers’ Home for Civil War Veterans 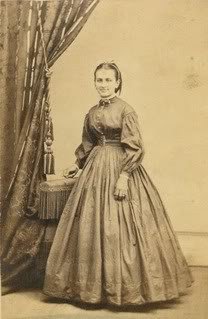 For several years before the Civil War, Delphine Baker devoted herself to the advancement of women. She had no connection with the Women’s Rights Movement, but advocated for better education for women. To that end, she traveled in many of the western states, giving lectures and influencing the public mind.

Delphine Baker was born in Bethlehem, New Hampshire, in 1828, and she lived in New England during her early youth. Her father was a respectable mechanic of good family and a good member of society. Her mother capable of influencing the minds of others, and was endowed with a natural power of leadership. The qualities and traits of both parents developed in the daughter.

At the beginning of the Civil War, Delphine was living in Chicago, Illinois, enjoying a break from public work, and devoting herself to her family. But she soon saw that there was a great deal women could do to help their country.

She collected materials for garments, exerted her influence among her extensive circle of acquaintances in gathering supplies, and providing for the demand for hospital comforts. She worked in the hospitals at Chicago and St. Louis, and urged others to enter upon the same work. Seeing that the hastily-arranged places for the care of the sick and wounded could use a woman’s touch, she gathered supplies and carried them to those points where they were most needed.

Not in strong health, a few months of that work exhausted her strength. She returned to Chicago, but her ardent desire to aid the sick and wounded stayed with her. In the spring of 1862, she announced the forthcoming publication of the National Banner, a monthly paper of sixteen pages, the profits of which were to be devoted to the needs of the volunteer soldiers of the United States.

Through her publication, Delphine pushed for the creation and support of a Federal asylum for disabled Union veterans. After publishing in Chicago a while, she moved to Washington, DC, where she continued producing her paper.

Eventually, she moved to New York City and established the National Literary Association in May 1864. The association’s goal was to establish a national home for disabled soldiers and sailors through the publication and sale of the National Banner, which also promoted literature, science and the arts.

Delphine worked diligently to collect signatures of prominent people for a petition supporting her cause. On December 8, 1864, a petition asking for “the passage of a bill appropriating money for the founding and support of a national home for totally disabled soldiers and sailors of the army and navy of the United States,” was referred to the Senate’s Committee on Military Affairs.

The Congressional session of 1865 was drawing to a close, and Delphine was worried. Repeated promises to support the bill for the establishment of the Asylum had all been broken. Finally, three days before the adjournment of Congress, Senator Henry Wilson, chairman of the Committee on Military Affairs, introduced the bill.

It passed on March 3, 1865, with no debate. The legislation incorporated the National Asylum for Disabled Volunteer Soldiers, and listed one hundred prominent citizens on the asylum’s board of managers. The large number of managers proved unwieldy, and on March 21, 1866, Congress passed new legislation lowering the number of members to twelve.

Delphine and the board of managers got right to work looking for suitable branch locations for the new soldiers’ asylum. Soon the board focused on a bankrupt resort located at Togus Springs, Maine. The first asylum opened there in 1866 as the Eastern Branch. The following year, two more asylums opened – the Central Branch in Dayton, Ohio, and the Northwestern Branch in Wisconsin, near Milwaukee. Eventually other branches followed.

Men were issued blue uniforms and loosely followed army regulations. Upon admission, each veteran was given a member number and assigned to a company. A company sergeant oversaw each company. The days were regulated with bugle calls waking the men in the morning, calling them to the dining hall, and putting them to sleep at night.

Delphine believed that Point Lookout, Maryland, was an ideal spot for a Soldiers’ Home. The government had established there, during the war, Hammond General Hospital with its extensive buildings, and a stockade and encampment for prisoners. The air was clear, the land fertile, a supply of excellent water brought from neighboring heights, an extensive oyster bed, and a fine beach for bathing added to its attractions.

The hospital property there consisted of three hundred acres of land, occupying the point that divided the mouth of the Potomac River from Chesapeake Bay. One or more large hotels, numerous cottages and other buildings remained from the days of peace.

Believing the place well suited to meet the wants of the Home, Miss Baker desired to secure the private property and a grant from the government for the portion that belonged to it. She succeeded in securing the latter, and in delaying the sale of the former.

But Miss Baker and the movement had friends in the highest quarters, and her efforts were aided by them, but it was not till the session of 1866 approached its close that the amended bill was reached, and the votes of both Houses at last placed the whole matter on a proper footing, and in competent hands. In the autumn and winter of 1866-67, Miss Baker succeeded in purchase the property, and giving it to the Trustees of the Asylum of Point Lookout.

Miss Delphine Baker’s labors for the veterans were then ended. She retired, not to rest, but to lend her efforts to any other worthy cause. She had no official connection with the organization that controlled the Asylum, but it was through her efforts that the United States, as a nation, provided a place of rest and recovery for the men who had given all but life itself to the Union cause.