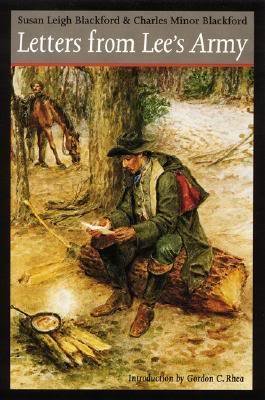 Susan and Charles Blackford agreed when Charles went to war that they would keep all letters that passed between them. Charles wrote home as often as possible, eager to preserve as much of his experiences as he could, realizing that impressions faded quickly. Susan recorded the events on the Virginia home front.

Susan Leigh Colston was born in 1835 to one of Virginia’s first families, and she married the distinguished Charles Minor Blackford, a Virginia aristocrat. Charles enlisted in the Second Virginia Cavalry Regiment, Army of Northern Virginia, at the outset of the war. He left their home in Lynchburg, Virginia in June 1861.

Most of Charles’ service was in northern Virginia around the Rappahannock and Rapidan Rivers, in the Shenandoah Valley, and with Lee’s army at Gettysburg in July 1863. Later that year, he went west to Tennessee with General James Longstreet’s Corps, returning to Virginia for the war’s final year.

Susan Blackford described Lynchburg, Virginia, as it geared up for war:

Directly after Lincoln’s call for troops the whole course of our ordinary life was changed. All our usual avocations were at an end, and a new life begun for women as well as men. The sound of the drum and fife could be heard from morning until night.

The men were drilling and equipping themselves with the accoutrements of war, while the women, with tearful eyes and saddened hearts, spent their time making coats and pantaloons, shirts, haversacks, and every species of work which would make the men more comfortable or more healthy in the field.

Besides the six or seven companies which were to go from this town, many others from the country around and from the Southern States, which had been suddenly organized, had to be equipped, and we undertook it most cheerfully, many of us glad to have our hands busy to stop the bleeding in our hearts.

Matron and maidens, old and young, all worked, not only at our homes but at the central meeting place in the Masonic Hall, which was turned into a common work-shop. Tailors came and cut out the uniforms, and the ladies brought their sewing machines.

The work was divided out; some did the basting, others the pressing, some sewed and others made buttonholes, and it was marvelous to see the amount that was accomplished by the loving hands of those devoted women, whose eyes were often blinded by tears as the dread thought would come over them that they might be making the shroud for a loved one as well as a uniform.

Many of the hands that toiled over that rough work had never before done more than stitch a book-mark or embroider a lace handkerchief, but they cheerfully sewed day by day on rough coats, haversacks, cloth gaiters, cartridge boxes and even the stiff canvas of a tent untiringly and without a word of complaint.

As the war progressed, Susan moved about Virginia. She was in Charlottesville during Custer’s raid, and spent much of her time in the wake of the invading Northern armies. She lost her home, three children, and most of her belongings during the war.

Since Susan moved around during the war, I could not determine where she was living at the time, but the wounded soldiers she nursed might have been from the Battles of the Wilderness and Spotsylvania Court House, which were fought from May 3 through May 21, 1864. On May 7, she wrote in a letter to Charles:

The wounded soldiers commenced arriving on Saturday, and just as soon as I heard of it, which was before breakfast, I went to see Mrs. Spence to know what I could do for them. She said the ladies had been so shamefully treated by the surgeons that she was afraid to take any move in the matter. I told her I would go and see Dr. Randolph and ask him if we could not do something.

I went down and did so at once and asked him what we could do. He said we might do anything we pleased in the way of attention to them; send or carry anything to them we wished, and he would be glad of our help. As soon as I reported to Mrs. Spence what he said, she started messengers in every direction to let it be known, and I went to eleven places myself.

We then determined to divide our provisions into two divisions: the bread, meat, and coffee to be sent to the depot, the delicacies to the hospitals. The reception of wounded soldiers here has been most hospitable. You would not believe there were so many provisions in town as have been sent to them.

On Saturday evening I went up to Burton’s factory, where most of the wounded were taken, and found the committee of ladies who had been selected, of whom I was one, just going in with the supper. I went in with them. We had bountiful supplies of soup, buttermilk, tea, coffee, and loaf bread, biscuits, crackers, and wafers.

It did my heart good to see how the poor men enjoyed such things. I went around and talked to them all. One man had his arm taken off just below the elbow, and he was also wounded through the body, and his drawers were saturated with blood. I fixed his pillow comfortably and stroked his poor swelled and burning arm.

Another I found with his hand wounded and his nose bleeding. I poured water over his face and neck, and after the blood ceased to flow wiped his pale face and wounded hand which was black from blood and powder. They were very grateful and urged us to come and see them again.

On Sunday evening news came that six hundred more would arrive, and Mrs. Spence sent me word to try and do something. The servants were away, and I went into the kitchen and made four quarts of flour into biscuits and two gallons of coffee, and Mrs. Spence gave me as much more barley, so I made, by mixing them, a great deal of coffee. I am very tired.

My writing desk has been open all day, yet I have just found time to write to you. Mrs. Spence came after me just as I was about to begin this morning and said she had just heard that the Taliaferro’s factory was full of soldiers in a deplorable condition.

I went down there with a bucket of rice milk, a basin, towel, soap, etc. to see what I could do. I found the house filled with wounded men and not one thing provided for them. They were lying about the floor on a little straw. Some had been there since Tuesday, and had not seen a surgeon.

I washed and dressed the wounds of about fifty and poured water over the wounds of many more. The town is crowded with the poor creatures, and there is really no preparations for such a number. If it had not been for the ladies many of them would have starved to death.

The poor creatures are very grateful, and it is a great pleasure to us to help them in any way. I have been hard at work ever since the wounded commenced coming. I went to the depot twice to see what I could do. I have had the cutting and distribution of twelve hundred yards of cotton cloth for bandages, and sent over three bushels of rolls of bandages, and as many more yesterday.

I have never worked so hard in all my life, and I would rather do that than anything else in the world. I hope no more wounded are sent here as I really do not think they could be sheltered. The doctors, of course, are doing much, and some are doing their full duty, but the majority are not.

They have free access to the hospital stores and deem their own health demands that they drink up most of the brandy and whiskey in stock, and, being fired up most the time, display a cruel and brutal indifference to the needs of the suffering which is a disgrace to their profession and to humanity.

By 1865, the Confederacy and most of the Second Virginia Cavalry were dead, but Charles survived. He lived on long enough to help Susan edit the letters they had exchanged during the war, which were published as Letters from Lee’s Army, which was privately published in 1894.

The book presents the correspondence between Charles and Susan during the war. Their letters make an outspoken and intimate account of army life in the field and the trials and troubles of those who stayed at home, and emphasized the stresses that war and separation can place on a marriage.

Memoirs of Life in and out of the Army in Virginia during the War Between the States was compiled by Susan Leigh Blackford from original and contemporaneous memoirs, correspondence, and diaries. Annotated by her husband, Charles Minor Blackford, edited and abridged for publication by Charles Minor Blackford III. New York, Scribner, 1947.