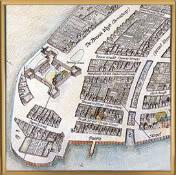 1664 through the American Revolution

Slavery in English New York
When the British took control of New York in 1664, the Duke of York proclaimed that no Christian could be held in slavery. This rule, and the principle behind it, became an issue later, when enslaved blacks wanted to convert to Christianity.

The British were far harsher toward slaves than the Dutch had been. They eliminated most of the pathways to freedom and passed laws that greatly limited what enslaved people could do, whom they could gather with, and when they could be out on the streets. Many of these laws were rewritten often, suggesting that they did not work very well.

But the city offered opportunities to enslaved people that rural areas did not. They found ways to mingle with other slaves, free blacks, and working class whites. Unlike slaves in rural areas, New York slaves did not live in quarters with large numbers of other blacks, but in the kitchens or back rooms of their owners’ houses.

Enslaved men often learned a skill, and worked as silversmiths, carpenters, coopers, or other tradesmen. A few were taught to read and write. Most enslaved women worked as domestic servants and were illiterate.

New York Slave Laws
The Dutch preserved all the property rights that they recognized when they surrendered New Netherland and New Amsterdam to the British in 1664. The ownership of Dutch slaves was also transferred to the English.

In the Laws of 1665, the first legal code in the new colony of New York, slaves were classified as chattel, and were bound to serve involuntarily and indefinitely, and their marriages were no longer recognized as legal. Native Americans and Africans were enslaved, but the laws made slaves synonymous with Negroes.

In the early 1680s, a series of laws regulating slave behavior were passed. Slaves were forbidden to leave their master’s house without permission. They could not own weapons. They could not gather in groups larger than four. Whites and free blacks could not entertain slaves in their homes, sell them liquor, or take goods or money from them.

According to laws passed in 1702, slaves could not gather in groups larger than three. Offenders received forty lashes on their naked back. Masters were free to punish their slaves for any misdeed however they chose, short of killing them or cutting off their limbs.

To encourage owners to let their slaves become Christians and to prevent the loss of slaves who had converted, a 1706 law ruled that owners did not need to free a baptized slave. The same law stated that any child born to an enslaved mother was a slave for life.

In New York City, slave owners were sometimes wealthy, but they were more likely to be ordinary tradesmen and shopkeepers who owned one or two slaves. Enslaved women worked as domestic servants in these owners’ households. The men often were trained to do skilled work, and sometimes they were taught to read and write.

During the British period, slaves had only a first name, with the owner’s surname appearing before it as a possessive, such as Regnier’s Mars or Burk’s Sarah. Sometimes these first names were actually African in origin. Quash, Quack, Quamino, and Cuff were names based on the days of the week. For example, Quash means Sunday.

During the mid-1600s, a number of slaves owned by the Dutch West India Company had been freed by the Dutch and given small plots of land, on which they built homes and grew crops. A small free black community was established on Manhattan Island. During the British colonial period, blacks were forced to sell the property that had been given to them by the Dutch. By the late 1720s, all the former land grants were owned by whites.

Eighteenth Century Slavery in New York
By the beginning of the eighteenth century about 14.2% of the population was black. Slave numbers grew as merchants, farmers, and artisans relied more and more on their labor. Between 1700 and 1774, the city legally admitted about 6800 slaves, 2800 of whom were from Africa. Slave markets at the foot of Wall Street were named after prominent families involved in slave trading.

Slavery was no milder in the urban North than in the Deep South. Instances of abusive treatment permeate public and personal records. The city’s Common Council passed one restrictive law after another: forbidding blacks from owning property or bequeathing it to their children, forbidding them to congregate at night or in groups larger than three, requiring them to carry lanterns after dark. Severe punishments, even death, for theft, arson, or conspiracy to revolt were carried out brutally and publicly.

Africans who had recently arrived in the colony led an uprising on the night of April 6, 1712, in which eight whites were killed and more than twenty others seriously injured. Fires were set in the east ward, although only a few outbuildings were burned and property damage was light. Twenty-five blacks paid for the incident with their lives, and nineteen were later executed.

During the same year and again in 1730, more laws were passed to tighten the control of slaves. The division of families was a principal cause of hardship for slaves. Slave families in New York City seldom shared one household. Mothers and young children lived together, but men were housed separately.

By the 1740s, 20% of New York’s inhabitants were slaves and two out of every five households owned at least one. Repressive laws were written to control them but the enslaved conspired, rebelled, and ran away relentlessly.

On March 18, 1741, an uprising began that lasted more than six months and resulted in massive property damage. The governor’s residence and Fort George on the southwestern tip of Manhattan were destroyed by fires. More houses and businesses burned during the following three weeks. Trials on various charges resulted in the execution of thirty black men, two white men, and two white women, as well as the deportation of seventy-two blacks.

Just before the American Revolution, there were 3137 blacks in Manhattan, about 14.3% of the population.

Slavery and the American Revolution
The ideas behind the American Revolution were fundamentally at odds with slavery. It was hard for colonists to accuse King George of treating them as slaves without thinking of the rights of the real slaves all around them. White New Yorkers began to think slavery was wrong and should be ended. Protestant Churches in the city began to oppose slavery for the first time. Quakers and Methodists voted to exclude slave owners from their New York congregations.

Once the British captured the city in August 1776, it became a refuge for thousands of escaped slaves. In June 1779, General Henry Clinton offered freedom to all slaves who reached British lines. By 1780, more than 10,000 blacks were crammed into the town, many living in tents and hovels. When the British left in 1783, more than 3,000 former slaves sailed away with them to Nova Scotia.

Slavery remained economically important in the city even after 1783, but free blacks were present and their numbers were growing. Black and white New Yorkers began to learn about being free together. Blacks rented and bought their own homes. Their children attended the African Free School or entered apprenticeships. Black men with property could vote. They formed their own churches and benevolent societies. Their speeches and essays appeared in print. Some whites were comfortable with blacks’ new status but many were not.

New laws made it easier for owners to free their slaves. Political leaders in the New York Manumission Society argued for abolition. In 1799, the state finally enacted its own gradual emancipation law, promising freedom to all newborn blacks over the coming decades. Slavery lasted 200 years in New York before it was completely abolished in 1827.