Women and Children Killed in Explosion 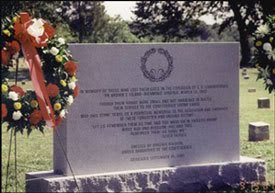 The Confederate States Laboratories (CSL) was located on Brown’s Island in the James River in Virginia. The brainchild of Confederate ordnance chief Colonel Josiah Gorgas, the CSL made small arms and ammunition for the Confederate Army.

Image: Monument to the Women and Girls in the Browns Island Explosion

This gray granite marker now stands beside the gazebo in Richmond’s Oakwood Cemetery. The names of those who perished and their ages are engraved on the back.

Because most of Richmond’s men were serving their country at the front, women and children were the bulk of the workforce at CSL, from the age of twelve to sixty. Their hands were small and well suited to assembling cartridges, fuses, caps, and primers for the Confederate army. Working at peak efficiency, even a child as young as nine could turn out up to 1200 cartridges per day.

In Department 6, the condemned cartridges were broken open and separated, the bullets into one receptacle and the powder into another. Seventy females were at work there on Friday March 13, 1863, among them was 18-year-old Mary Ryan, one of the factory’s older workers.

As Mary attempted to extract the black powder from a defective friction primer, a percussion cap got mixed in with the powder and created an explosion. The chain reaction that followed destroyed the building that housed Department 6.

The fire alarm was sounded, and word of the explosion spread quickly throughout the city. Within an hour, the banks of the river were crowded with people. The bridge leading to the island became so congested that an extra guard was stationed there, and only those who were caring for the wounded were allowed to pass.

Soon, wagons and carriages arrived, and the work of removing the wounded was begun. All day, the work of taking care of the sufferers continued. Ten were killed by the explosion, and others died during the day. Most of the wounded were removed to their homes.

Between eleven and twelve o’clock yesterday morning, a dull, prolonged roar in the direction of Brown’s Island startled that portion of the city and directed attention to the island, on which is located the Confederate Laboratory works, for the manufacture of percussion caps and gun cartridges.

A tide of human beings, among them the frantic mothers and kindred of the employees in the laboratory, immediately set towards the bridge leading to the island, but the Government authorities, soonest apprised of the disaster, had already taken possession of the bridge, and planting a guard of soldiers, allowed passage to none except the workmen summoned to rescue the dead and wounded from the ruins.

The ambulances for their conveyance to the hospitals, and the surgeons who hurried to the scene by dozens, as soon as the nature and extent of the calamity became known, had volunteered their services for the relief of the survivors. Hundreds of parents and relatives awaited in an agony worse than death the list of killed and mangled ones.

The apartment in which the explosion occurred, about fifty feet in length and twenty in width, was blown into a complete wreck, the roof lifted off, and the walls dashed out, the ruins falling upon the operatives, and the horrors of fire were threatened to be added to those of the explosion; but the flames were suppressed.

Some ten or twelve were taken from the ruins dead, and from twenty to thirty still alive, but suffering the most horrible agonies, blind from burns, with the hair burned from their heads, and the clothing hanging in burning shreds about their persons. Others less injured ran wailing frantically, and rushing into the nearest arms for succor and relief.

The immediate treatment of the burned consisted in removing their clothing and covering the body thickly with flour and cotton, saturated with oil; chloroform was all administered—the sufferings of the wounded were alleviated by these means in the interval between their rescue and removal to their homes, or General Hospital No. 2, where many were taken.

The returning ambulances carrying the sufferers were besieged by the friends and relations of the employees, and children clamored into the vehicles, crying bitterly in their search after sisters and brothers. The distress among friends was aggravated by the fact that it was utterly impossible to recognize many of the wounded on account of their disfigurement, except by peculiar bits of clothing, shoes, etc.

The bodies of the dead were not removed from the island, and a Coroner’s inquest will be empanelled today to investigate the circumstances attendant upon the catastrophe. We regret to learn that Reverend John Woodcock, one of the officials at the Laboratory, is among those seriously, if not dangerously, injured by the explosion.

By Saturday night, twenty-nine persons had died, and more deaths appeared certain. Then on Sunday, shaken Richmonders could see funeral corteges moving in numerous directions through the city, in several instances encountering each other as they wound their ways to the same cemetery.

By the Monday after the explosion, additional details of the human agony had emerged. A 15-year-old boy had been wedged between a wall and some timbers, and axes were used to free him. Burned horribly and suffering from a broken skull, the boy lived until Wednesday.

Several girls whose clothes were on fire had run from the debris and plunged into the river. All are thought to have come out, save one — Martha Burley, who is missing and is supposed to have drowned by accident or voluntarily in her crazed state of mind.

Mary Ryan suffered with her injuries until the Monday after the explosion. She died at her father’s home on Oregon Hill, a residential area within a mile of the laboratory. In the end, the explosion killed 45 of her 70 co-workers.

For several weeks, reminders of the calamity cropped up. On April 10, Martha Clemmons, age 25, who was injured in the explosion and then caught smallpox, was buried. The next day, the body of the missing laboratory employee, Miss Burley, was pulled from the James River and turned over to friends for burial.

Despite the fact that they gave their lives for their country, those who perished in the Brown’s Island explosion were soon forgotten as Richmond returned to the grim business of supplying the soldiers in the field. Only Department 6 supervisor Reverend John Woodcock was accorded the dignity of a proper funeral and a headstone; the remainder of the victims (many the children of poor immigrant families) were laid to rest in unmarked paupers’ graves.