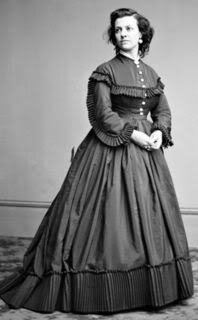 Pauline Cushman, a Union spy, was born Harriet Wood on June 10, 1833, in New Orleans and spent some of her early childhood there. Her father then moved the family to Grand Rapids, Michigan. Pauline did not like it there, and at seventeen she ran away to New York to become an actress. She landed some small parts and caught the attention of a theatre owner from New Orleans, who hired her on the spot.

While Pauline was in New York, she married Charles Dickinson, a musician, on February 7, 1853. Sometime after their wedding, Charles and Pauline moved to his hometown of Cleveland, Ohio, where he found work as a music teacher.

In Cleveland, they frequently lived in the same house with his parents until their children were born. Pauline’s oldest child, Charles, was born in March of 1858, followed by a daughter, Ida, in 1860.

On October 22, 1861, Charles Dickinson enrolled as a musician in the band of the 41st Ohio Infantry. Suffering from chronic dysentery during the Shiloh campaign, Charles was discharged on June 9, 1862, and sent home to Cleveland. One of the band members later recalled:

We were camped on the battlefield of Shiloh for about a month after the battle, and we had nothing but the filthy surface water to drink and the food was not of the best, consisting mostly of raw pork, as we were not allowed to build fires most of the time. [We] had no tents, no cooking utensils, nothing to eat only raw pork and crackers, coffee beans we had to grind with our teeth and rain nearly every night.

When Dickinson arrived home, he weighed only 120 pounds. Pauline wrote:

When my husband came home from the Army, he was in very poor health, in fact a complete wreck… I had two small children to take care of and was unable to take care of both them and him, and as his father had a very large house with plenty of room and he had two brothers and three sisters at home besides his father and mother, he went there to be taken care of… I heard his condition every day and frequently saw him. We never expected him to get any better but regarded him beyond the hope of recovery.

Charles Dickinson died December 8, 1862, from head injuries suffered in a fall related to his ill health and feeble condition. Pauline wrote: “He died a few minutes after midnight and was buried late in the afternoon of the same day. I was not present when he died as he died very suddenly, but I was in Cleveland at the time and attended his funeral.”

Following her husband’s death, Pauline left her children over to the care of her sister-in-law in Ohio, and returned to acting. Hard feelings between Pauline and her in-laws existed for the rest of her life. She eventually wound up in Union-controlled Louisville, Kentucky. Within a month or two she was performing on stage for a theater company, and landed a role in The Seven Sisters.

In March 1863, she was approached by two paroled Confederate officers who offered her a $300 bribe if she would propose a toast to the Confederacy while she was on stage. She readily accepted the money, and promised to fulfill her promise at the next evening’s performance.

She immediately reported the Confederate offer to the Union provost marshal, who recognized that an expression of loyalty to the South would help her gain entry to Confederate circles. He recruited her to act as a spy, and told her to go ahead and make the toast.

Pauline interrupted one of her performances to address the audience. “Here’s to Jeff Davis and the Southern Confederacy,” she said. “May the South always maintain her honor and her rights.” The gesture had the desired effect. She was fired from the theater company, but became an instant celebrity with the Southerners.

After her initial success she was instructed to proceed to Nashville to get specific instructions from Colonel Truesdail, chief of the Union Army Police. After the initial formalities were exchanged, Colonel Truesdail said:

Miss Cushman, all that you have yet done is as nothing compared with the service which it is now in your power to render your country. I have heard much of your courage, your devotion, and ready expedients; but what I want you to do now will demand a quickness of intellect and a powerful constitution, a ready wit and the courage of a soldier tried in a thousand fields.

Truesdail proposed that Pauline go south, and report back on the state of Confederate defenses in central Tennessee. He warned her that the mission was hazardous and could result in her death if she were to be caught, but she readily accepted the challenge. She was then publicly evicted from the Union lines on the pretext that she was a Southern sympathizer. As a cover, she pretended to be looking for her brother, whom she claimed was a rebel officer.

Cushman quickly became the darling of the Southern troops. Her good looks and her feigned interest gained her numerous invitations from Confederate officers to accompany them along their lines. In this process, she gathered important information on rebel troop strength and positions.

While attempting to make her way back to the Union lines, Pauline came under suspicion and was arrested. She was escorted under guard by the Confederate cavalry raider, General John Hunt Morgan, who was to deliver her to General Nathan Bedford Forrest. Gripped by panic, Pauline made an unsuccessful escape attempt.

When she was recaptured and searched, the incriminating notes were found. Though both Morgan and Forrest treated her with the utmost polite deference, it was made abundantly clear to her that she must not attempt to escape again. General Forrest told Pauline:

I have no time now to investigate your case. It is a complicated and difficult one. I will, therefore, send you to General [Braxton] Bragg’s headquarters, at Shelbyville, and if you should be so fortunate as to prove your loyalty to the South, you may always depend upon General Forrest for protection. But this, I am sorry to say, I do not believe possible, and therefore say, prepare for the worst, for hanging is not pleasant.

Under questioning by General Bragg, Pauline related her cover story of being sent beyond federal lines as a result of her outspoken support for the Confederacy. Bragg did not believe her, and ordered her to be tried as a spy.

For ten days, she awaited the verdict, and she was found guilty. Because of prison conditions and the strain of waiting for the court to decide her future, Pauline became ill. Though truly sick, she presented an image of being worse off than she really was.

The Union Army of the Cumberland under General William Rosecrans was just beginning its advance, hoping to keep the Confederates from aiding the Rebel army at Vicksburg, Mississippi, which was under siege by General Ulysses S. Grant. They forced the Rebels to abandon Shelbyville on June 27, 1863, after two days of fighting.

There was some debate among the southern physicians as to whether Pauline was well enough to bring with them until she could be executed. A Confederate surgeon finally put his foot down and declared that she was not well enough to travel.

When the Southerners pulled out, Pauline was left behind at the home of a civilian doctor. She was rescued by the advancing Federals just three days before her scheduled execution. Pauline was transported as far as Murfreesboro in the personal ambulance of General Gordon Granger. From there, she was sent by rail to Nashville.

With her cover blown, Pauline’s days as a spy were over. In recognition of her valuable services General Granger and General James A. Garfield (future president of the United States, but then chief of staff for the Army of the Cumberland under General Rosecrans) awarded her the honorary rank of major of cavalry.

She traveled north to public acclaim and went on the lecture circuit under the guidance of P. T. Barnum. Dressed in the uniform of an army major, she told paying audiences embellished stories of her adventures.

In November 1864, Pauline was away when her oldest child, six-year-old Charles Dickinson, died at Saxtons River, Vermont. Pauline had him buried next to his father in Cleveland. Her other child, Ida Dickinson, also died in childhood.

After the war, Pauline teamed up with the Irish comedian James M. Ward. The duo traveled together in the American west from 1865 to 1867, but Pauline eventually split with Ward and worked on her own at theaters across the country.

By 1872, she no longer held the public’s attention in the East, so she traveled to San Francisco. There she met and married August Fichtner in December 1872. Within a year she was widowed again. She spent the next five years working among the redwood logging camps near Santa Cruz.

She was again married on January 29, 1879 to Jeremiah Fryer in Florence, Arizona Territory. For a while, he and Pauline ran a hotel and stagecoach stop and livery stable in Casa Grande, Arizona. Fryer was elected sheriff of Pinal County, Arizona, for a number of years.

Pauline’s attempts at domesticity ended with the death of an adopted daughter. Grief over the death led the couple to separate in 1890. She returned to San Francisco for a short while, but her fortunes declined due to age and an opiate addiction.

By the end of 1892 she was living at El Paso, Texas. Her health gone, she did a little sewing in exchange for food and a place to sleep – on a cot in the corner of a kitchen.

Destitute, Pauline applied for a Federal pension based on her first husband’s military service. On February 4, 1893, the Pension Bureau awarded her a retroactive pension of $8 per month beginning December 8, 1862, the day her husband died, and terminating December 19, 1872, the day she remarried. The total award amounted to less than $1,000.

Her youthful beauty gone and her stage career over, she was a depressed, lonely woman who had outlived two husbands and both her children, and was then estranged from a third husband. Pauline returned to San Francisco, and spent her last days in a boarding house there, working as a seamstress and a charwoman.

During the night of December 1, 1893, Pauline Cushman Dickinson Fichtner Fryer, amid rumors of suicide, died from an overdose of narcotics at the age of 60.

Pauline’s final moment of fame came when the California division of the Grand Army of the Republic and the Women’s Relief Corps held a huge funeral for her. Major Cushman’s remains now rest in the Officer’s Circle at the Presidio’s National Cemetery in San Francisco. Her simple gravestone reads, Pauline C. Fryer, Union Spy.