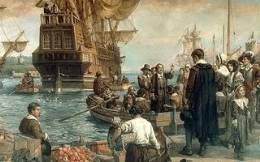 Slavery in the Massachusetts Bay Colony

Massachusetts Bay Colony was the first slave-holding colony in New England, though the exact beginning of black slavery cannot be dated exactly. The first certain reference to African slavery was in connection with the bloody Pequot War in 1637. Native Americans of the Pequot Tribe were being pushed off their land by the European settlements. In an effort to dislodge the English, the Pequot attacked the town of Wetherfield.

The Pequot War began with the surprise English attack on a native settlement near the Mystic River in present-day Connecticut, which saw between three hundred and seven hundred Indians shot or burned to death. Native American women and children who escaped the slaughter were enslaved.

The men and boys were believed to be too dangerous to keep in the colony, so they were transported to the West Indies aboard the ship Desire, to be exchanged for African slaves. The Desire arrived back in Massachusetts in February 1638, after exchanging its cargo, according to Governor John Winthrop’s journal, loaded with “salt, cotton, tobacco and Negroes.”

Because the colony was not well suited to plantation agriculture, most Massachusetts masters rarely owned more than one or two slaves. Slave-owners tended to live in coastal towns, and their bondsmen were frequently used to assist in the family business.

In 1641, the Massachusett Bay Colony passed laws that made slavery legal – when slaves were “taken in just wars, [or] as willingly sell themselves or are sold to us.” A 1670 law made it legal for the children of slaves to be sold into bondage. By 1680, the colony had laws restricting the movement of blacks.

Merchants in the town of Boston made the first attempt at direct importation of slaves from West Africa to the West Indies in 1644, but the venture was only partially successful. But by 1678, they were selling black human beings to Virginians. Massachusetts was supplying slaves to Connecticut by 1680 and to Rhode Island by 1696.
Christianity was no barrier to slave-ownership. The Puritans regarded themselves as God’s Elect, and so they had no difficulty with slavery, which was sanctioned in the Bible. They believed that blacks were cursed, and condemned by God to serve whites.

The Puritans usually took the Africans to the West Indies and sold them in exchange for a few experienced slaves, which they brought back to New England for their own use. Sometimes they brought back the weaklings that could not be sold, and got the best price they could for them.

When two Massachusetts slave merchants joined with London slave raiders in the massacre of an African village in 1645, the colonial government was indignant. The two men were pronounced guilty of the Biblical crime of man-stealing – kidnapping Africans instead of acquiring them in exchange for rum or trinkets, but mostly because the slaughter had taken place on the Sabbath!

The defeat of the Dutch – who were always heavily involved in the slave trade – opened the way for New England in the early 1700s. At the same time, the expansion of New England industries created a shortage of labor, which was filled by slaves.

Slavery happened gradually. From fewer than 200 slaves in 1676, and 550 in 1708, the Massachusetts slave population jumped to a whopping 2,000 by 1715. It reached its largest percentage of the total population between 1755 and 1764, when it stood at around 2.2 percent. The slaves were concentrated in the industrial and seaside towns. Boston was about 10 percent black in 1752.

Emancipation in Massachusetts
In 1777 the Massachusetts Legislature tabled a proposal for gradual emancipation. The 1778 draft constitution legally recognized slavery and banned free blacks from voting. The more liberal state constitution approved two years later contained a bill of rights that declared “all men are born free and equal, and have… the right of enjoying and defending their lives and liberty.”

This provided the basis for abolishing slavery in Massachusetts, but it clearly was not the intent of the Legislature to do so. Popular sentiment and the courts were pro-abolition, however. And it was a 1783 judicial decision, interpreting the wording of the 1780 constitution, that brought slavery to an end in Massachusetts.

Collectively known as “the Quock Walker case,” it was actually a bundle of judicial actions concerning a Massachusetts slave known as Quock Walker. In his instructions to the jury in this case, Chief Justice William Cushing held that the constitution had, in fact, granted rights that were incompatible with slavery:

As to the doctrine of slavery and the right of Christians to hold Africans in perpetual servitude, and sell and treat them as we do our horses and cattle, that (it is true) has been heretofore countenanced by the Province Laws formerly, but nowhere is it expressly enacted or established…

But whatever sentiments have formerly prevailed in this particular or slid in upon us by the example of others, a different idea has taken place with the people of America, more favorable to the natural rights of mankind, and to that natural, innate desire of Liberty, with which Heaven (without regard to color, complexion, or shape of noses-features) has inspired all the human race.

And upon this ground our Constitution of Government, by which the people of this Commonwealth have solemnly bound themselves, sets out with declaring that all men are born free and equal – and that every subject is entitled to liberty, and to have it guarded by the laws, as well as life and property – and in short is totally repugnant to the idea of being born slaves.

This being the case, I think the idea of slavery is inconsistent with our own conduct and Constitution; and there can be no such thing as perpetual servitude of a rational creature, unless his liberty is forfeited by some criminal conduct or given up by personal consent or contract ….

Legal experts have pointed out that Cushing’s statement was likely obiter dictum (a remark or observation made by a judge that does not form a necessary part of the court’s decision), and the constitution of 1780 never actually was amended to prohibit slavery. Nevertheless, with the courts clearly refusing to uphold it, slavery in Massachusetts was doomed.