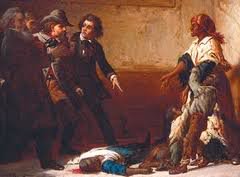 Margaret Garner was a fugitive slave who became widely known when she and her family made a brave escape to freedom in the years before the Civil War. Garner killed her own daughter rather than allow the child to be returned to slavery. Toni Morrison’s Nobel Prize winning novel Beloved (1988) is based on this story.

Margaret Garner, an enslaved African American woman in pre-Civil War America, was born on June 4, 1834, at Maplewood plantation in Boone County, Kentucky, where her parents were also slaves. When she was old enough, Margaret became a household domestic, waiting on the family and performing household chores.

On a bitter cold Sunday night in late January 1856, Margaret Garner and sixteen other slaves made arrangements to escape together from two neighboring Kentucky plantations, several miles back from the Ohio River. Margaret and her four children were enslaved on the farm of her brutal master, Archibald Gaines. Her husband Robert and his parents were slaves on a nearby farm.

There was snow on the ground and the roads were smooth, so a plan was made to travel to the river on a large sleigh, which they borrowed from one of their owners, along with two good horses. The party of seventeen crowded into the sled and began their hazardous journey late at night. They drove the horses at full speed, and at dawn reached the Ohio River below Covington, Kentucky.

The river was frozen over at the time, thus offering the opportunity to escape to the free state of Ohio. Moving as quickly as possible, they left the sled and horses on the bank, and crossed the frozen river on foot. However, by the time they reached the town of Cincinnati on the opposite shore, it was broad daylight, and people were beginning to move about the streets.

At that point the fugitives split up so as not to attract too much attention. The other nine fugitives made their way up town and found friends who conducted them to safe hiding places, where they remained until nightfall. They eventually escaped to the North or to Canada via the Underground Railroad.

Margaret Garner and her children, along with Robert and his parents went to the house of a free black man named Elijah Kite, who once lived in their neighborhood. They had to ask for directions several times, which made them very conspicuous. The Garners remained at Kite’s house while Kite went to see noted Quaker abolitionist Levi Coffin who advised Kite to take the eight fugitives to the colored settlement on the outskirts of the town. Coffin would meanwhile arrange for their escape that night.

When Kite returned, his home was surrounded by a posse of Federal marshals and the slave master Archibald Gaines, and the Garners had barricaded themselves inside Kite’s house. After trying to gain entry for quite some time, the pursuers finally battered down the door and rushed in. Robert Garner fired several shots and wounded one of the officers, but he was soon overpowered and dragged out of the house.

At that moment, the twenty-one-year-old mother of four made a desperate, fateful decision: rather than have them be returned to slavery she would take her children’s lives, then her own. Margaret grabbed a butcher knife from the table, and with one stroke cut the throat of her two-year-old daughter, Mary. She was preparing to kill her other children and herself when she was subdued by the lawmen. The whole Garner family was then arrested and put in jail.

The Cincinnati Enquirer ran a sensational article about the Garners’ arrest, which described the angry crowd that gathered to condemn the family as they were being driven from the scene of the crime. Even after her capture, Margaret defied the institution of slavery. She wanted to be tried in Ohio as a free person even if it meant she might receive a death sentence for killing her child.

Margaret Garner then became the defendant in one of America’s most widely publicized fugitive slave trials. Abolitionists used her trial to dramatize the evils of slavery. Levi Coffin, the devout Quaker abolitionist who is credited with helping over 3,000 fugitives escape from slavery via the Underground Railroad, described Margaret Garner as

a mulatto, about five feet high… twenty-one or twenty-three years old. On the left side of the forehead was an old scar, and on the cheekbone of the same side, another one. When asked what caused them, she said: “White man struck me.”

Coffin wrote that Garner held her remaining daughter of nine months close to her throughout the trial, while “the little boys, four and six years respectively, were bright-eyed, woolly-headed little fellows, with fat dimpled cheeks.”

The counsel for the defense brought witnesses to prove that Garner had been brought to Ohio by her owners a number of years before, to act as nurse, and according to the law which liberated slaves who were brought into free states by the consent of their masters, she had been free from that time, and her children, all of whom had been born since then – following the condition of the mother – were also free.

A United States commissioner decided that a voluntary return to slavery, after a visit to a free state, re-attached the conditions of slavery, and that the fugitives were legally slaves at the time of their escape. It was ordered that the Garners be released from jail and returned to their owner, in accordance with the laws of Kentucky and the United States. A federal district judge agreed and ordered the sheriff to turn the Garners over to a U.S. marshal.

Despite touching appeals and eloquent pleadings, the Commissioner remanded the fugitives back to slavery. A probate judge tried to intervene, but it was too late. The Garners had already been sold to a slaveholder in New Orleans, Louisiana.

Ohio Governor Salmon P. Chase, a Republican and an abolitionist, demanded that Kentucky’s governor immediately return the Garners to Ohio. Chase did not want a precedent to be set that would allow Kentucky slaveholders to come to Ohio and reclaim their runaway slaves.

On their way to New Orleans, the steamboat on which the Garners were traveling collided with another boat. Margaret was holding her baby girl in her arms, and they were hurled into the river by the shock of the collision. The African American cook of the ship leaped into the water to save them, but only succeeded in saving Margaret. Her baby daughter drowned. Margaret “displayed frantic joy” on hearing the news – her baby would never have to suffer the life of a slave.

A growing number of white Northerners, including many Ohioans, began to view slavery as an inhumane institution by the late 1850s. This case only added to the tensions between the North and South that eventually led to the Civil War.

In 1870, the Cincinnati Chronicle interviewed Robert Garner, who had fought for the Union in the Civil War and was living with his two grown sons. He told the newspaper that after the trial, Gaines had sent the couple to work as household servants for one of his friends in New Orleans. Later, Judge Dewitt Clinton Bonham purchased them for plantation labor at Tennessee Landing, Mississippi.

Robert reported that Margaret Garner had died in Mississippi in 1858 of typhoid fever, and that before she died, she urged him to “never marry again in slavery, but to live in hope of freedom.” Robert Garner’s death, recorded in 1871, probably resulted from a chest injury he sustained while working aboard a ship.

Margaret Garner’s story was the inspiration for the novel Beloved (1987) by Nobel Prize winning author Toni Morrison, was adapted into a film of the same name (1998) starring Oprah Winfrey and Danny Glover, as well as an early 21st century opera entitled Margaret Garner (2005), composed by Richard Danielpour.