Women in Business in the Civil War Era 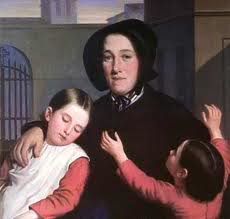 Margaret Haughery was a business entrepreneur and philanthropist who became known as the Mother of the Orphans. She devoted her life to the care and feeding of the poor and hungry, and to funding and building orphanages throughout the city of New Orleans, Louisiana. Born into poverty and orphaned at a young age, she began her adult life as a washwoman and a peddler – yet she died an epic business woman and philanthropist who received a state funeral.

Out of the horror of civil war and a nation of diverse people bound by a shared tragedy, armies of volunteers sold bonds and gathered contributions for the soldiers on the battlefield. The Civil War’s influence on philanthropy did not end with the surrender at Appomattox, however. Those fundraising efforts introduced a process of organized charitable giving that helped formalize charity as fundamental to the American social conscience. Margaret Haughery was decades ahead of the rest of the country, beginning her philanthropic works in the 1840s.

Childhood
Margaret Gaffney was born in County Cavan, Ireland in 1813, the fifth child of William and Margaret O’Rourke Gaffney. Her father was a small farmer and possibly a tailor, who owned a small shop. When Margaret was five years old, her parents left Ireland – a land plagued by destitution, political turmoil, and oppression under British rule. They came to America and settled in Baltimore, Maryland.

In 1822 a yellow fever epidemic ravaged Baltimore, claiming among its victims Margaret’s parents, who died within days of each other. Thus Margaret was orphaned at a young age. She was deprived of any education, and never learned to read or write. A kind-hearted Welsh family took her in, but she worked for her keep. When she was old enough, Margaret went into domestic service, which was the norm for Irish women in Baltimore at that time.

On October 10, 1835 Margaret married Charles Haughery at a ceremony in Baltimore Cathedral.

Haughery was not a well man. To escape the cold climate, Margaret persuaded him to move to New Orleans, and they arrived there November 20, 1835. Like others in the city, the young family suffered from rampant epidemics of yellow fever and cholera. For a time Charles’ health showed a slight improvement but it was short-lived. Doctors recommended a sea journey, and Charles decided to go to his native land of Ireland.

This trip was delayed by several months pending the birth of the couple’s first child, a girl they named Frances. Eventually, Charles made the voyage but after some months Margaret received word that he died shortly after reaching his destination. Within a few months infant Frances became seriously ill and died. For the second time in her life Haughery lost her entire family, yet she was only 23 years old.

Her Life’s Work
Margaret Haughery was resourceful and found work as a laundress and a helper in the Poydras Orphan Asylum. She solicited funds for the orphans, and was a very effective fundraiser. Haughery was rewarded for her efforts with a position in the administration of the orphanages.

Besides her administrative duties, she maintained a dairy herd of 40 cows to provide the orphanage children with milk, and sold the surplus to help raise funds for the orphanages. The Female Orphan Asylum of the Sisters of Charity built in 1840 was practically all her work, because her excellent business skills allowed her to clear it of debt.

During the yellow fever epidemics in New Orleans in the 1850s, Haughery went from house to house, without regard to race or creed, nursing the victims and consoling the dying mothers with the promise to look after their little ones.

The epidemic of 1853 left thousands of homeless children, and Haughery embarked on a new project, which eventually became the St Vincent de Paul Infant Asylum. Although she provided for the orphans, fed the poor and gave generously to charity, her resources grew. She was so successful that several other facilities were opened. Some of the orphanages she built were St. Elizabeth Orphan Asylum, the Louise Home for Girls and St. Vincent Infant Asylum.

Haughery loaned money to a baker, and soon discovered that the business was on the verge of bankruptcy. The only way she could recover her money was to take control of the bakery and operate it. She made the bakery a success, and it provided the greater part of her fortune, and jobs for many people. All the asylums in New Orleans were supplied with bread from her bakery and at such a low price it was virtually free.

The Civil War
The war had a profound effect on New Orleans and greatly increased the number of orphans and people in need. During the war Margaret made efforts to lessen the hardships brought on by the war by helping to feed those who suffered from the wartime food shortage. To the hungry citizens of occupied New Orleans, Haughery gave wagonloads of bread fresh from her bakery.

When Union General Benjamin Butler occupied New Orleans and set up martial law in 1862, he set up barriers and curfews. No one was to pass these barriers or be outside past the curfew. General P.G.T. Beauregard nicknamed the general “Beast Butler” because of his threats against the Southern ladies of New Orleans.

No one was to barriers set up by Butler, but Haughery continued to distribute food and milk to the needy outside those lines. Butler called her before him and told her that she would be shot or hung if she crossed the lines again. She asked the general if it was the will of President Abraham Lincoln to starve the poor?

General Butler is said to have replied, “You are not to go through the picket lines without my permission, is that clear?”

To which Butler is said to have responded, “You have my permission.”

During and after the Civil War Haughery’s bakery flourished, as did her charitable work. During Reconstruction, she supported Union efforts to keep peace in Louisiana. After the war, she earned enough to build the big steam factory for her bread. By this time everybody in the city knew her. The children all over the city loved her; the businessmen were proud of her; the poor people all came to her for advice. She sat at the open door of her office, and gave a good word to everybody, rich or poor.

Despite the vast sums at her disposal, the philanthropist, businesswoman and social worker spent little on herself, and was reputed never to own more than two dresses – a plain one for everyday use, while on special occasions she wore a plain silk dress and mantle. At all times she wore a Quaker bonnet, which became something of a trademark.

At the age of 69, Haughery contracted an incurable disease, the exact nature of which is not recorded. She lingered many months in the care of her friends, the Sisters of Charity. People of all classes and denominations visited her during this illness.

Margaret Gaffney Haughery died on February 9, 1882. Her body was taken to St Vincent’s Asylum, where it was embalmed and laid in state. The city newspapers were edged in black to mark her passing. The mayor of New Orleans led the funeral procession and two Louisiana governors were pallbearers.

When Haughery’s will was read, it was discovered that despite all her giving, she had saved a great deal of money, and she left every cent of it to the different orphan asylums of the city. Whether for white children or black, for Jews, Catholics or Protestants, made no difference; for Margaret always said, “They are all orphans alike.”

Her will was signed with a cross because she never learned to read or write. This was a poignant reminder of her humble beginnings, her great business successes and her mark on humanity.

In 1884, the city of New Orleans erected a marble statue of Margaret Haughery, one of the first statues in the United States to honor a woman. The little park where it was erected is called Margaret Place. There is only one word on the monument: Margaret.