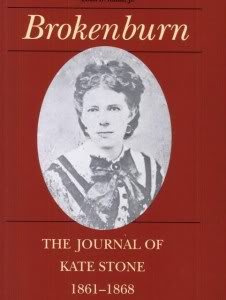 Kate Stone was twenty years old when the Civil War began. At that time, she was living with her widowed mother, five brothers and younger sister in northeastern Louisiana at her family home Brokenburn, a large cotton plantation of 1,260 acres and 150 slaves.

Kate kept a diary from 1861 through 1868, in which she recorded her daily experiences. She had doubts about what her future might bring, writing that “women grew significantly uglier in wedlock and ignored and abandoned their former female friends.” During the war Kate and her family lost everything, watched as their way of life was destroyed and left their home to become fugitives to escape the Union Army they feared would harm them.

Kate was enthusiast yet fearful, as she watched her three older brothers leave home to join the Confederate Army. Fourteen-year-old James was now in charge of running the plantation and protecting the family. Kate clearly understood after the departure of her brothers: “We who stay behind may find it harder than they who go.”

The sacrifices and living without the niceties of her normal life was a strain. As prices loomed higher on items that had once been daily requirements, merchants refused to extend credit and no longer bartered for items. Kate illustrated this point by listing the amounts that the family paid for items they could not do without, $500 for a yard of silk, $15 for a pair of shoes, $50 for riding boots, but the most understandable upset was $50 for a barrel of flour.

From 1862 on, the Union Army fought to gain control of the Mississippi River and divide the Confederacy in half. In the winter of 1862, Union troops overran Milliken’s Bend, only a few miles from Brokenburn. Kate watched as bluecoats scoured the countryside for food and supplies. Plantations were commandeered, and slaves were encouraged to revolt. Many of their wealthy neighbors abandoned their homes, but the Stones clung to their plantation, determined to wait it out.

As frightening to Kate as the Federal troops were the black men and women now claiming their freedom. “What are they going to do to me, given what we have done to them?” she wrote. Many southerners could not believe that their “loyal” slaves would leave them. Kate wasn’t one of them. She wrote, “If I were in their place, I’d do the same.”

As Union forces approached, the Stones became desperate. Federal authorities demanded that they stay on their property, but they were frightened. Slaves were running away, and there was no labor to tend the crops. The Stone family fled in the spring of 1863.

Just as they were preparing to leave home, they received news of the death of Kate’s brother:

I can hardly believe that our bright, merry little brother Walter has been dead for seven weeks. He was eighteen in December and died in February. He was but a boy and could not stand the hardships of a soldier’s life. Four months of it killed him.

The family finally escaped through the bayous in a rickety canoe with nothing, leaving their home and all their worldly possessions behind. They fled to Tyler, Texas, three hundred miles by horseback and boat.

Texas was a favorite destination for displaced planters, but Kate found it “strange the prejudice that exists all through the state against refugees. We think it is envy, just pure envy. The refugees are a nicer and more refined people than most of those we meet, and they see and resent the difference.”

From Texas, Kate Stone watched the war destroy the South she loved, and was devastated by Lee’s surrender. On May 15, 1865, she recorded in her diary: “The best and bravest of the South sacrificed – and for nothing. Yes, worse than nothing. Only to rivet more firmly the chains that bind us.”

The family returned to Brokenburn in November of 1865. Kate wrote:

It does not seem the same place. The bare echoing rooms, the neglect and defacement of all – though the place is in better repair than most – and the stately oaks and green grass make it look pleasant and cheerful, though gardens, orchards, and fences are mostly swept away. But if the loved ones who passed through its doors could be with us again, we might be happy yet.

Kate had some difficulty adjusting to her new life. On September 22, 1867, she wrote:

A long silence and a year of hard endeavor to raise a crop, reconstruct the place with the problem of hired labor, high water, and cotton worms. Mamma had little trouble in getting advances in New Orleans to plant. Cotton is so high that merchants are anxious to advance to put in a crop, and there is much Northern capital seeking investment in that field. Mr. Given became Mamma’s merchant. Col. Cornelius Fellowes, her old friend, has not resumed business, or only in a small way.

“The Negroes demanded high wages, from $20 to $25 for men, in addition to the old rations of sugar, rice, tobacco, molasses, and sometimes hams. Many of the old hands left, and my brother went to New Orleans and brought back a number of ex-Negro soldiers, who strutted around in their uniforms and were hard to control. I was deadly afraid of them.

Yet, she seems to have acquired some self-knowledge:

It has taken trouble to teach me my faults, and how earnestly I try now to enjoy instead of repine, to be thankful instead of fault-finding. I will try always to see the silver lining of the cloud. All my life I have been surrounded with love and care, far more than I deserved, and I will try in the future to be more worthy of the blessings that brighten my pathway.

Kate made a few later entries, but ended her diary in September 1868. “So this is the end – shall I ever care to write again?”

After helping her mother run Brokenburn for a few years, in 1869 Kate married a Confederate officer she had met during the war. He worked as a plantation manager, then eventually acquired land of his own.

The couple then moved to Tallulah in northeastern Louisiana. Kate gave birth to four children, only two of whom lived to adulthood. In her later years, Kate became active in the United Daughters of the Confederacy and in local book and literary clubs.

When Kate Stone’s diary was published in 1955, it was to wide acclaim, hailed by critics such as Edmund Wilson and by crowds – an estimated 10,000 folks in Louisiana including her 77-year-old daughter and has since become regarded as a Civil War classic, though it is not as well known as the diary of Mary Boykin Chesnut.