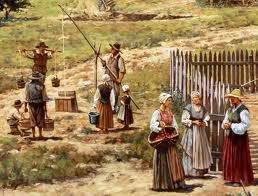 Jamestown would not have survived as a permanent settlement without the daring women who were willing to leave behind their English homes and face the challenges of a strange new land. These women created a sense of stability in the untamed wilderness of Virginia. They helped the settlers see Virginia not just as a temporary place for profit or adventure, but as a country in which to forge a new home.

The Early Years
On May 13, 1607, an expedition of about 100 men and boys reached a marshy peninsula about 30 miles up the James River, now in the state of Virginia. There they anchored their three small ships – the Godspeed, the Discovery, and the Susan Constant.

On the following day, these adventurous and brave men first stepped foot on American soil. This would become the first permanent English settlement established in the New World, and they named it Jamestown for King James I of England. The men who founded the colony were excellent businessmen, but terrible farmers. Because of the brackish water, poor food supply and an unexpected drought, the men of Jamestown quickly faced famine, disease and death.

Eight months later when a supply ship arrived, which also brought more colonists, only 38 of the original 100 settlers remained. Famine, rebellion and Indian attacks had decimated their numbers. And the survivors were badly in need of help. It would be a long nine months before any women arrived.

Women in Jamestown
In 1608 another 200 colonists set sail for Jamestown, including two women: Mrs. Forrest, the wife of a settler, and her young maid Anne Burras. The first recorded marriage at Jamestown was in 1608 between Anne Burras and John Laydon. Anne had the good fortune to be one of the few settlers to live through both the Starving Time and the Indian Massacre of 1622.

In 1611, one of the colonists, John Rolfe, successfully cultivated tobacco, which became the salvation of the colony, making it economically stable for the first time. Immigration increased, and large tobacco plantations were established along the James River.

Starting in 1618, the London Company offered “headrights” to all settlers who could pay for their own voyage to the New World. A headright was a tract of land, usually fifty acres, given to anyone over age fifteen—male or female—who settled in Virginia. This opportunity to own land was a key motivation to impoverished people in England.

Headrights for women, however, were revoked after the Company discovered that if a woman held her own land, she was less likely to be willing to marry. Marriage—and the production of children who would be Virginia citizens from birth—was much more important to investors than the promotion of opportunities for independent women.

London Company officials and investors wanted to make the colony at Jamestown permanent. Bringing over more English women, particularly women of an elevated social position, seemed to be the solution. By 1619, Company officials were actively promoting this plan, believing that the presence of marriageable women would make the men work harder, invest more of themselves in the colony, and improve the poor quality of life that discouraged many settlers from making Virginia a permanent home.

Only those men who could reimburse the Company for transporting and supplying a woman would be able to compete for a wife. The London Company set their value at “one hundredth and fiftie [pounds] of the best leafe Tobacco.” During the next three years, the Company sponsored 147 women, hoping that they would stabilize the colony at Jamestown.

In 1619, ninety young English women arrived to make wives for the single colonists. In 1621 fifty-seven women crossed the Atlantic under the Company’s recruitment plan. One was Alice Richards, a twenty-five year old widow, one of three widows on that ship. Another, Ann Jackson, was twenty years old and single, and came highly recommended by the churchwarden of her London parish. Both of these women were probably married within months of their arrival in the autumn of 1621.

Indentured Servants
During Jamestown’s first twenty years, some of the women who traveled there arrived as indentured servants who signed contracts in England to work in Jamestown without wages. For many, signing on as an indentured servant was the only way to emigrate. Once the servant arrived, a colonist already there would reimburse the Virginia Company for the woman’s voyage expenses, and she worked without pay for four to seven years.

Indentured servants were essential to the colony – they ensured that the tobacco crop would be successful. Female servants also did other agricultural work, milking cows and caring for cattle, hogs, and poultry. They also took over the cooking, caring for children and the sick, planting vegetable gardens, and doing laundry for households that did not include women. Because of the skewed gender ratio, indentured women sometimes married planters prosperous enough to pay off the remainder of their terms.

A woman was expected to remain unmarried during her term of indenture. After her time was served, she was given a set of clothing and something with which she could start a new life. Sometimes it was money but more often it was tobacco or some other commodity.

Most of Virginia’s prominent families evolved from such humble beginnings. As women bore successive generations of children, they moved up the James River to Williamsburg and then Richmond, building the vast estates and plantation mansions that characterized the area before the American Revolution.

Women’s Rights?
When a woman a free woman in Jamestown married – and there was great pressure to do so – society expected her to begin childbearing immediately and to reproduce regularly. Women frequently gave birth to ten or twelve children, but childbirth was very dangerous for women. Jamestown was surrounded by wilderness, and few trained doctors or midwives were available. Female neighbors and relatives helped women through their labor.

Having children was very important because of the labor-intensive tobacco culture. Family members worked their own tobacco fields, and children added to the labor force. Colonial children were therefore considered an economic asset. Disease spread easily, however, and so few sicknesses could be cured that an infant had only a fifty percent chance of growing to adulthood. One quarter of babies died before their first birthday.

Families in seventeenth century Jamestown were patriarchal, meaning that the man was the head of the household. Every member of the family, including slaves and servants, and everything connected with family property was under the command of the man of the house.

Until the first son was old enough, the woman of the household was in charge if the man was absent. Men who owned large plantations often were absent because of business, political, or military obligations, and when that was the case, women were considered “deputy husbands,” especially in legal matters.

But women were always in charge of the daily management of the family home. They planted gardens, where they grew vegetables such as carrots, beets, radishes and chives, and herbs for cooking and medicinal purposes. The main meal of the day was served at noontime, and the settlers called it dinner. It was cooked over an open hearth and would commonly consist of pork, poultry or seafood, bread and cider, wine or ale.

African Women at Jamestown
From 1619 on, African women were also part of the historical tapestry being woven at Jamestown. They were able to work like the men in the fields and could reproduce more native-born slaves. The women also had to provide dinner for their families after the day’s work. Often the slaves had to have their own gardens and kill animals for food.

Female slaves were primarily brought to the colonies as investments by the plantation owners. Those who did not farm the land were in the homes with the gentry class women. They cared for the children of the household, cleaned and cooked. Working indoors was not necessarily better than working outside.

In the fields, groups worked together out of the watchful eye of the master, but being in the house meant constant supervision. Hard physical labor like doing laundry, carrying water and routine chores such as emptying chamber pots and making beds had to be done every day. They were also at the beck and call of their masters and master’s wives 24 hours a day.

In the mid-1620s, the colony stabilized, and people turned their attention to building satisfactory housing. Timber was abundant, and these new structures were mainly wooden frame houses, but the homes of the wealthiest planters featured a brick foundation and a brick chimney with the rest of the house constructed in wood.