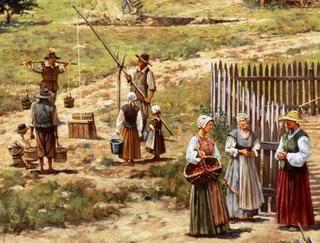 Image: Detail from a painting by Keith Rocco

One of the first English women to arrive and help provide a home life in the rugged Virginia wilderness was fourteen-year-old Anne Burras. She was the first unmarried English woman in the New World, the personal maid of a Mrs. Forrest who came to Jamestown in October 1608 to join her husband, Thomas Forrest.

At that time, Jamestown was a fort of about one acre in size, with one storehouse and one church, described by John Smith as looking like a barn. It was the home of about 200 men. The houses were described as shacks that looked ready to fall apart.

The two women were part of the second group of settlers commissioned by King James I to establish a permanent settlement in the New World. Mrs. Forest was ill from the crossing and apparently did not live long in Virginia.

Anne Burras married John Leydon, a colonist ten years her senior, in December 1608. It was probably the first Christian wedding in the colonies.

Anne gave birth to a daughter, Virginia, in December 1609. She and John may have been living at Point Comfort, a newly established outpost of Jamestown. The women, men and children of Jamestown had to resort to eating dogs, horses, rats and snakes. All but about 60 persons died out of a population of 20 women and 470 men.

The Point Comfort residents, while enduring many hardships, probably fared better than those at Jamestown during the winter afterward referred to as the Starving Time. They had access to lobsters and hogs, while those at Jamestown had nothing after their hogs were deliberately destroyed and their ability to harvest wild game was ended by the angry Indians.

Anne and John Leydon later moved to Elizabeth City, a settlement at present-day Newport News, Virginia. They were still listed on the Muster Roll of 1625 along with four daughters. John received 200 acres in Henrico and patented an additional 1250 acres with Anne’s brother, Anthony Burrows in 1636.