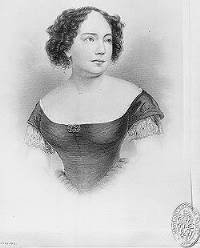 President Abraham Lincoln asked Anna Ella Carroll to become his special advisor and an unofficial member of his Cabinet, the first woman to ever hold such a position. Unfortunately, the public never knew about Carroll’s important contributions because a woman would not have been trusted to fill such roles in the U.S. government.

Anna Ella Carroll was born on August 29, 1815, on Maryland’s Eastern Shore in a twenty-two-room mansion called Kingston Hall on a 2000-acre tobacco plantation in Somerset County. She was the first of eight children born to Juliana Stevenson Carroll and Thomas King Carroll. Anna’s paternal grandfather, Charles Carroll, signed the Declaration of Independence.

Anna was educated and trained by her father to be his aide, and received a better background in law and politics from her father than most men did in studying for the bar. By the age of twelve, she had learned to assist her father in his work by finding legal passages from his law books for use in his debates with Southern legislators.

The Carrolls, like many other plantation owners, were becoming increasingly land and slave poor. The price of tobacco on the Eastern Shore was no longer a reliable source of income. Finally the economic pressure was too great, and the Carrolls turned over many of their slaves to their neighbors, whom they knew would give them good homes. Anna wanted to contribute to her family’s upkeep so she established a girls’ school at Kingston Hall.

Luckily, a distant relative returned to the States from South America and bought the plantation in 1840, and the remaining slaves moved with the family to a smaller plantation called Warwick Fort Manor with a large three-story brick home on the Choptank River.

After her family was settled in their new environment, Anna decided it was time to leave home and try to make her own way in the world. Now twenty-two, she announced to her parents that she and Leah – a slave girl Anna’s age – would move to Baltimore, the second-largest city in the United States at the time.

Leah, a skilled seamstress, found employment working for wealthy families in Baltimore. As she worked in their homes, she would listen to their gossip about new businesses and bring the news to Anna, who tracked down the owners and used her writing ability to compose letters for mailing lists, generate publicity, and create advertising. Her public relations work soon earned her enough to send home a few extra dollars home. She worked steadily for seven years in Baltimore, making a name for herself as a skilled publicity writer.

In 1844, Anna began writing press releases for railroad companies in Baltimore. Her work for the railroads, as well as her family’s strong political background, allowed her to easily slip into the world of politics that was so familiar to her. During an era when women were not expected to do more than write about politics and war, Anna became active in the Whig Party, meeting such people as the army chief of staff Winfield Scott.

General Scott discussed his war strategies in the invasion of Mexico with Anna and she began sitting in regularly at the visitors’ gallery in the Senate, where she met many powerful men and future presidents, such as Zachary Taylor and James Buchanan, whom she briefly dated. She also became close friends with Millard Fillmore in the early 1850s.

Through her relationship with Presidents Taylor (1849-1850) and Fillmore (1850-1853), Anna maintained involvement in party development and policy-making. She wrote letters to party officials to influence political decisions. It is said she could “scheme, connive, and maneuver as well as any man.” In 1854, she joined the American Party (the Know Nothing Party) following the demise of the Whigs.

In the midst of her budding political career, Anna had many discussions with Northern abolitionists about slavery. To satisfy her personal belief that slavery was wrong, she freed all twenty of the slaves she had inherited from her father, and used her political influence to persuade abolitionists to accompany them to safety in Canada.

In 1854 Fillmore began seeking Anna out as a confidante and, because his first wife had died, as a possible second wife. Anna wanted to make an impact in the political world but not as the president’s wife. Although she refused Fillmore’s proposal, she continued to help him in his campaign for the presidency in 1856, which he lost to James Buchanan.

In 1860 Anna became romantically involved with Lemuel Evans, a member of the secret service assigned to protect President Lincoln. Evans offered Anna her second marriage proposal, which she refused. She was concentrating on her political writing at the time.

The Civil War
In the summer of 1861, Anna wrote a political pamphlet in response to a Senator’s charge that Lincoln had acted in violation of the Constitution by mustering state militias into service following the bombardment of Fort Sumter, suspending the writ of habeas corpus, and imposing martial law and a naval blockade.

She stated that as the chief enforcement officer of the nation, Lincoln could use all his powers to enforce Federal law in the Southern states, including his role as commander-in-chief of the armed forces. “There can be no equivocal position in this crisis; and he who is not with the Government is against it, and an enemy to his country,” she wrote.

Her powerful writing caught the eye of President Abraham Lincoln and he demanded government funding to publish 50,000 copies of the manuscript and sent Anna a telegram inviting her to the White House for a confidential interview. He spoke frankly with her about his need for her strategical mind and political background. He asked her to become an unofficial member of the Cabinet, acting as a top adviser to him, and she enthusiastically accepted the offer.

Under that verbal agreement, her first assignment was to observe the area and report her opinion of a planned Union attack on the Mississippi River. As a woman, she probably would not be suspected of being an informant for the president. In late November 1861, she sent a detailed plan to the War Department outlining a Federal military campaign to be carried out by the combined Union Army-Navy forces, changing their invasion route from the Mississippi to the Tennessee River, sending one copy to the secretary of war and one to the president.

In early 1862, General Ulysses S. Grant took his army up the Tennessee River and captured several key forts and transportation junctions. On February 6, 1862, Fort Henry fell to Admiral Andrew Foote’s gunboats, and on February 13, Fort Donelson fell to Grant’s and Foote’s combined forces – the first two significant victories of the Civil War for the Union.

Carroll’s role was kept secret; the public was not to know that the Union plans were devised by not only a civilian, but by a woman. There were rumors of a woman working in Washington, but her name was not leaked to the public. Meanwhile, in accordance with her plan, Northern troops were heading for Vicksburg, Mississippi.

During the remainder of the war, Carroll worked with Lincoln on issues pertaining to colonization and emancipation of African American slaves. She lobbied him to establish a colony of freedmen in British Honduras, today Belize. Although Carroll had freed her own slaves, she lobbied against issuing the Emancipation Proclamation at first, fearing that the support of Southern Unionists would be lost and resistance to the Union would be stiffened.

But she wrote that Lincoln did have the constitutional right to free the slaves as a temporary war measure under his power as commander-in-chief, since the proclamation would help cripple the organized forces of the rebellion. Yet the measure would have to be suspended once the war emergency ended – freeing the slaves required a constitutional amendment.

Carroll continued to work side by side with Lincoln and Grant until the war’s end in 1865. During the final months of war, Lincoln began planning the reconstruction of the country, with Carroll at his side offering advice. His plans for reconstruction were cut short with his assassination in April 1865. Though Lincoln had promised to pay Carroll for her work as a spy, he died before that was possible.

Exhausted from work and grief, Carroll was now fifty. Yet she by no means intended to quit simply because the war ended. She devoted her efforts to reconstruction, but she was largely ignored during those early reconstruction years. She appealed to Congress for recognition and compensation for her contributions to the War effort. 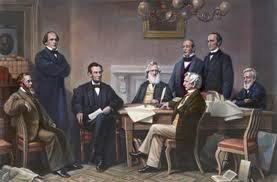 Image: First Reading of the Emancipation Proclamation
Indirect recognition came to Anna Carroll in this Francis Bicknell Carpenter painting, which shows President Abraham Lincoln and his Cabinet, and an empty chair on the right with a folder of maps and notes similar to those Carroll had carried, acknowledging her as an unrecognized member of the Cabinet.

Grant, with whom Carroll had communicated by telegraph from Washington many times when he was in the battlefield, was being backed by an overwhelming number of people for the office of the presidency. Grant asked Carroll to do what she did best – advise him from his post as general of the Union army to his job as president of the United States.

Feeling that the time had come for her to be officially recognized for her service to the government, Carroll sought Grant’s support. She still had unpaid bills to printing companies that printed copies of her speeches and pamphlets, equaling over $6000, which she spent most of the rest of her life trying to collect. The Carroll family fortune had been used up, and Anna had lived very modestly throughout her service to several presidents.

In 1872, Carroll prepared a statement for Congress, “A Memorial,” in which she quoted some of the most influential men in government, who argued that she be given the recognition and monetary compensation she was rightly due. She went through twenty years of congressional hearings. Every military committee but one voted in her favor, but no bills passed the Congress.

Later Years
Although Grant knew the truth about Carroll’s responsibility in the war, other top advisers chose to bury the truth and promote Grant as the real war hero. Grant did not argue with this decision, causing Carroll to lose her faith in her former friend. Her “Memorial” and other claims for recognition disappeared from government files, drawing the process out for years.

In 1881, a bill was finally introduced in Congress to grant recognition and pension to Anna Carroll. The compensation was to be at a rate given to major generals. Unfortunately, President James A. Garfield was assassinated while the bill was under consideration, and House Bill 7256 mysteriously disappeared. Instead, Congress passed a bill to pay her $50.00 a month for life for the, “important military service rendered by her during the late Civil War.”

When the leaders of the Women’s Suffrage Movement learned of Anna’s story, they attracted attention to her plight, claiming such an injustice would not have happened if women were allowed to vote.

Carroll and her younger sister Mary lived together in Washington, DC, on Anna’s meager pension. Under Mary’s devoted care, Carroll continued her writing well after she was an invalid in her old age. In a room piled high with books and letters, she enjoyed the last years of her life by a window that gave her a view of the West. She accepted visitors until her last days, including her long-time love, Lemuel Evans.

Anna Ella Carroll died of Bright’s disease, a kidney ailment, on February 19, 1894, in Washington, DC, at the age of 78. In accordance with her wishes, she was buried in the churchyard of the Old Trinity Church in Cambridge, Maryland, next to her father, mother and other members of the Carroll family. The epitaph on her grave reads, “A woman rarely gifted; an able and accomplished writer.”