Hospital Matron and Nurse from Alabama 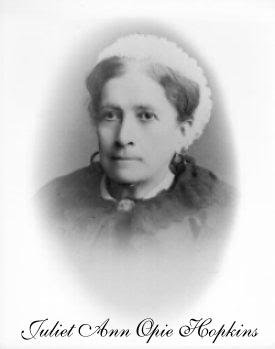 Juliet Hopkins (1818–1890) was born on a plantation in West Virginia, but moved to Mobile, Alabama after marrying Arthur Hopkins. When her husband was appointed to oversee hospitals during the Civil War, Juliet went to work converting tobacco factories into hospitals. She made daily visits to the injured soldiers, and received a wound on the battlefield in the course of her duties.

Juliet Ann Opie was born in Jefferson County, Virginia on May 7, 1818, the daughter of a wealthy planter. She was educated at home by English tutors and later in a private school in Richmond. When she was sixteen years old, her mother died and she left school to help manage the family estates. In 1837, Juliet married Commander Alexander Gordon of the United States Navy. Gordon died in 1849, leaving her a young widow.

In 1854, Juliet married Arthur Hopkins, a widower twenty-four years her senior, a lawyer and a prominent Mobile businessman. His career included a term as Chief Justice of the Alabama Supreme Court and as a United States Senator.

At the beginning of the Civil War, Hopkins sold her estates in New York, Virginia and Alabama, and donated the proceeds to the Confederate government to establish hospitals for sick and wounded soldiers.

In the Confederate military system, each state was responsible for the care of its own patients. Hopkins moved to Richmond, and in June 1861 began organizing medical services. In August 1861, Hopkins established a hospital for Alabamians.

In its fall 1861 session, the Alabama legislature assumed responsibility for supporting these hospitals and appointed Juliet Hopkins chief matron of all state hospitals. By November, set had established a second, larger hospital, and a third in the spring of 1862. It was remarkable for a woman to emerge in such a position of leadership and responsibility.

Groups in Alabama sent supplies and money to assist Hopkins in her work. The women of Alabama began to form organizations to help in the war effort by making clothes and collecting supplies. By January 1, 1862 there were 92 such women’s auxiliaries in the state.

On July 1, 1862, during the Battle of Seven Pines, Juliet was shot in the leg twice while rescuing wounded men from the battlefield. These injuries required surgery, and left her with a permanent limp.

The most remarkable aspect of Mrs. Hopkins’ work was the level of personal care she and her colleagues provided. She wrote letters home for the soldiers, made requests for furloughs, and supplied them with books to read during the long hours of convalescence. She kept a list of the soldiers who died and sent locks of their hair to their families in Alabama.

Fannie Beers, a nurse in the Third Alabama Hospital, wrote about Hopkins:

I have never seen a woman better fitted for such work. Energetic, tireless, systematic, loving profoundly the cause and its defenders, she neglected no detail of business or other thing that should afford aid or comfort to the sick and wounded. She kept up a voluminous correspondence, made in person every purchase for her charges, received and accounted for hundreds of boxes sent from Alabama containing clothing and delicacies for the sick and visited the wards of the hospitals every day. If she found any duty neglected by nurse or surgeon or hospital steward, her personal reprimand was certain and very severe.

She could not nurse the sick or wounded personally, for her whole time was necessarily devoted to executive duties, but her smile was the sweetest, I believe, that ever lit up a human face, and standing by the bedside of some poor Alabamian, away from home and wretched as well as sick, she must have seemed to him like an angel visitant. A more decided woman in dealing with all who came within her influence or control I never knew, yet she was kindly withal, though never expecting or brooking opposition. To her husband alone she deferred in all things, and was gentleness itself.

In March 1863, the Confederate Medical Department assumed control over all hospitals. In Richmond, many patients were transferred to larger hospitals such as Chimborazo, Winder and Jackson. Thirty-five units were closed down; two of the Alabama hospitals were among these. The Second Alabama, the largest of the three, remained open. Within two months of the decision to employ larger hospitals, no patients arrived at the Second Alabama hospital.

However, after Chancellorsville in early May 1863, and perhaps after Gettysburg two months later, the Confederates again sent sick and wounded to the Second Alabama. These, however, were the slightly wounded, who left in ten or twelve days. Hopkins was forced to close the Second Alabama in October 1863 and transfer her patients to the larger hospitals.

Hopkins returned to Alabama to continue her work in hospitals in the state. When supplies on the home front became scarce, she had the carpets in her Mobile home cut up into blankets and given to the governor for distribution.

For a short time in late 1864, she was in charge of a hospital at Camp Watts at Tuskegee, but left there in January to go to Montgomery to do hospital work. She remained on duty there until April 1865, when she and Judge Hopkins fled to Newnan, Georgia to escape Union General James Wilson’s raid.

After the war, Judge and Mrs. Hopkins returned to live in Mobile, and Juliet’s humanitarian sacrifices became more widely known. She became a living legend.

Judge Hopkins died in late 1865, and Juliet left Alabama to live on property she still owned in New York. She and her husband had lost most of their wealth during the Civil War, and she lived the rest of her life in relative poverty.

Sources show that Juliet had donated between $200,000 and $500,000 to the Southern cause. Her daughter, Mrs. Juliet Opie Ayers, wrote that her mother gave her entire fortune to the Confederacy.

Juliet Opie Hopkins died on March 9, 1890 while visiting her daughter in Washington, DC. Her funeral was attended by scores of veterans, including former Confederate General Joseph Wheeler and Union General John Schofield.

Hopkins was so highly regarded by the entire nation that she was buried with full military honors at Arlington National Cemetery, and the members of the Alabama congressional delegation served as her pall bearers. Following her bier as an attendant was General Joseph E Johnston, who years before had called her The Angel of the South.