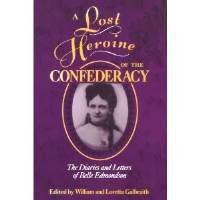 Belle Edmondson ardently supported the Confederacy during the Civil War. She probably began smuggling supplies and funds to the Confederate army in 1862, after the fall of Memphis, and served as a Confederate agent throughout the war. In July 1864, she fled south, because the United States had issued a warrant for her arrest.

Isabella Buchanan Edmondson was born in Pontotoc, Mississippi on November 27, 1840, the youngest of eight children. When the Civil War began, the Edmondsons were living on a farm in Shelby County south of Memphis, Tennessee. They were staunch supporters of the Confederacy. Two of Belle’s brothers fought at Shiloh, and Belle nursed the wounded from that battle.

In June 1862, Federal forces occupied Memphis. The Edmondson farm was then located in the no-man’s-land, between the opposing lines, with scouts from both armies constantly roaming about. Union pickets covered the roads in the area. The Confederate lines were less than thirty miles away.

Belle began passing information and smuggling supplies to the Confederates. She made frequent trips into the city for contraband. She passed through the Union lines during the day and delivered the contraband that night to the Rebels who came through the lines to meet her. She smuggled medicine and amputation tools through the Union lines, knowing that Federal soldiers were reluctant to search women.

She recorded her work as a spy in her diary, also news from the front, local skirmishes, troop movements, and the running of contraband through Federal lines.

Annie Nelson and myself went to Memphis this morning – very warm, dusty and disagreeable. Accomplished all I went for—did not go near any of the officials, was fortunate to meet a kind friend, Lucie Harris, who gave me her pass—‘tis a risk, yet we can accomplish nothing without great risk at times. I returned the favor by bringing a letter to forward to her husband, Army of Mobile. I sat up until 8 o’clock last night, arranging mail to forward to the different commands. It was a difficult job, yet a great pleasure to know I had it in my power to rejoice the hearts of our brave Southern Soldiers—most were Kentucky letters for Breckenridge’s command—the rest were Missouri letters for Johnston’s, Polk’s, and Maury’s commands. God grant them a safe and speedy trip.

Anna Nelson and I started to Memphis about 9 o’clock, suffered very much with the cold, stopped at Mr. Roberts to warm—from there we passed through the pickets to the Pigeon Roost Road—found Mr. Harbut’s after much searching—did not reach Memphis until 10 o’clock, left our horse & buggy at Mr. Barbier’s, went up town—and not one thing would the merchants sell us because we did not live in their lines. I went to see my friend Mrs. Facklen, she went up town and bought the things for me—poor deluded fools, I would like to see them thwart a Southerner in such an undertaking as I had. Spent a very pleasant evening with Mrs. Facklen’s family—all rebels, and we talked just as we please! Mrs. F. and I did not go to sleep until 2 o’clock, this being the first time I had seen her since she returned from Dixie. I have finished all my provisions, and will have nothing to do tomorrow except fixing my things for smuggling.

At one o’clock, Mrs. Facklen, Mrs. Kirk and I began to fix my articles for smuggling, we made a balmoral of the grey cloth for uniform, pinned the hats to the inside of my hoops—tied the boots with a strong list, letting them fall directly in front, the cloth having monopolized the back & the hats the side. All my letters, brass buttons, money, &c in my bosom—left at 2 o’clock to meet Anna at Mr. Barbie’s—started to walk, impossible that—hailed a hack—rather suspicious of it, afraid of small-pox, jumped in, with orders for a hurried drive to corner Main & Vance—arrived, found Anna not ready, had to wait for her until 5 o’clock, very impatient—started at last—arrived at pickets, no trouble at all, although I suffered horribly in anticipation of trouble. Arrived at home at dusk, found Mr. Wilson & Harbut, gave them late papers and all news. Mrs. Harbut here to meet her brother, brought Mr. Wilson a letter from Home in Kentucky. Worn out.

Mrs. Facklen and Mrs. Kirk in great distress, old Harbut gave her ten days to abandon her house, she took an old Yankee officer, his wife & two children to board with her, hoping he would recall the heartless order to make her and her little children homeless. I did not smuggle a thing through the lines, except some letters.

Another day of excitement—about 30 Yanks passed early this morning, only six came in for their breakfast, they did not feed their horses—they behaved very well, and seemed to be gentlemen, in fact we so seldom see gentlemen among the Yankees that we can appreciate them when they are met with.

Tate and I arrived in Memphis quite early. I dined with Mrs. Jones, she went with me to see Capt. Woodward, to know what I must do in regard to an order which I heard was issued for my arrest—he advised me to keep very quiet until he could see the Provost Marshall and learn something in regard to it.

Belle’s frequent trips back and forth had attracted the attention of Union General Stephen Hurlburt, and he issued the warrant for her arrest.

I went round according to appointment, met Capt. Woodward at 11 o’clock. Capt. W. had not seen the Provost Marshall, he went as soon as I left, came round to Mrs. Facklen’s after dinner, and brought bad news—I was to be arrested and carried to Alton on first boat that passed—for carrying letters through the lines, and smuggling, and aiding the rebellion in every way in my power—he sent me word I must not think of attending Jennie Eave’s wedding, or go out of doors at all, he would be compelled to arrest me if it came to him officially, but as my father was a Royal Arch Mason, and I a Mason, he would take no steps, if I would be quiet.

Miss Annie came over to see us, and get me to go over the creek for her. Father is rather afraid, but I will try it in the morning—though I expect not, Father has just left my room, and says he is afraid for me to go—I am so unhappy about the trouble I have got in—oh! what is to become of me, what is my fate to be—a poor miserable exile.

Belle escaped arrest by fleeing south to Waverly Plantation in Clay County, Mississippi, including stops in Tupelo, Pontotoc and Columbus. She remained there for the remainder of the Civil War.

This day has seemed a week to me. We had a very late start from home, Hal was first to wake, the sun was shining then, Laura sound asleep. After some delay we had breakfast, bid all the servants and home folks good bye and got off at 8 o’clock, poor Laura was greatly distressed. God guide her, and protect her from all harm, bless my poor old father, and save him from such excitement as we are always exposed to.

A bright and beautiful day, yet the roads very heavy, 8 miles from Oxford, hills all the way, left quite early—were very fortunate in getting to the place we did—Mr. Wilson with his usual kindness, assisted us greatly, in fact we would never have succeeded in getting through had it not been for him. We arrived in Oxford about 10 o’clock, stopped at the University, where Henderson’s Scouts were camped, and put Mr. W. bundles out, he very kindly sent two Servants with us to take our baggage, and carry our horses back to camp, indeed I do not know how Hal and I can ever repay him for his kindness to us during this trip. Hal & I slept all afternoon.

We are camped 6 miles from Lafayette Springs, nowhere to stay all night. Jim, Lt. McConnell’s cook, who is driving our baggage wagon, cooked us a delightful supper—fried ham and eggs, Butter milk & Corn bread. We decided not to go on tonight—10 o’clock, after tea, Jim cleaning up. Helen & John building a fire in an old store which we are to inhabit. Nannie & Hal sitting over the fire, I alone, writing the record of our adventures.

On July 14, 1864, Belle and her party finally reached their destination:

Hal, Therese and I got up very early and started for the country, after running around, first on one road then another, we finally arrived at Waverly, just 7 miles above Columbus, although we had traveled ten or twelve miles. Fate, how strange, yet how delightful, they are a very wealthy family, a real Southern Mansion—his daughters are very accomplished, and Miss Lou is a beautiful girl—such delightful Music, and an elegant dinner, our first peaches and milk.

Further details of Belle’s life are sketchy. She returned to Memphis after the Civil War was over. There, she befriended Jefferson Davis and his family in the early 1870s.

Just after announcing her engagement to a mysterious ‘Colonel H,’ she died in 1873 at the age of 33, probably due to one of the three epidemics that infested Memphis that year. According to family legend, ‘Colonel H’ was a Yankee officer. She was buried with her parents in Elmwood Cemetery in Memphis.