One of the First Social Reformers in the United States 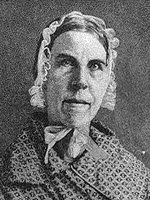 Sarah Moore Grimke, the lesser known of the Grimke sisters, was born November 26, 1792, in Charleston, South Carolina, the daughter of Judge John Grimke. Sarah was a writer, an abolitionist and an early advocate of women’s rights. At five years old, she saw a slave being whipped and tried to board a steamship that could take her to a place where there was no slavery.

The Grimkes lived alternately between a fashionable townhouse in Charleston and a thriving cotton plantation in Beaufort with hundreds of slaves. Judge Grimke was the Chief Justice of the South Carolina Supreme Court. He was a strong advocate of slavery and of the subordination of women. He fathered at least 14 children.

Judge Grimke taught Sarah about the law. Naturally, Sarah wanted to become an attorney and follow in her father’s footsteps. She secretly studied her brother’s lessons at night, but girls were not allowed to have a secondary education. When her brother went off to law school at Yale, Sarah had to remain at home. Judge Grimke wrote that his daughter had a great legal mind, and was the equal of her older brother.

Just turning thirteen and feeling rejected by the outside world, Sarah welcomed the arrival of her youngest sister Angelina – ‘Nina’ as she called her—and the opportunity to feel needed. Her mother was worn out from the demands of a huge household and bearing fourteen children. Sarah became Angelina’s godmother, and from that day forward, she assumed a responsibility for her youngest sibling that she would never relinquish.

At age 26, Sarah took her father to Philadelphia for medical care. While there, she was exposed to the city’s Society of Friends, who regarded slavery as evil. The Quakers also allowed women to become leaders in the church, and female preachers were common.

After Judge Grimke died, Sarah returned to Charleston but soon realized that she could not live in the presence of slavery any longer, even though it meant leaving her precious Nina, who was only thirteen at the time. Sarah moved permanently to Philadelphia and became a Quaker.

She visited Charleston in 1827, and converted Angelina to the Quaker faith. Angelina joined her in Philadelphia in 1829. Soon thereafter, Angelina wrote a letter to the editor of William Lloyd Garrison’s paper, The Liberator, in which she stated her strong opposition to slavery. The letter was published without her knowledge or consent.

The sisters were attacked by their Quaker community; antislavery work was considered radical, and the idea of women being publicly active was completely unacceptable. Simultaneously, the Grimkes were welcomed into the abolitionist movement. They had to choose: to recant and remain in good standing with the Quakers or to openly oppose slavery. They chose the latter.

Abolitionist Theodore Weld, whom Angelina later married, trained them as abolition speakers. The sisters began lecturing in private homes to members of the movement about the horrors of slavery. For the first time, they could freely state their beliefs, but Sarah was rebuked again in 1836 by the Quakers when she tried to discuss abolition in a church meeting.

At the request of abolitionists, they began to speak publicly. They were among the first women to do so in the United States, and they drew intense criticism. Sarah soon realized that women were also oppressed and that, without a place in the public arena, they could not begin to right the wrongs of society. She became convinced that the fight for women’s rights was just as important as abolishing slavery, and became an early feminist.

In 1837, the sisters went on a tour of Congregationalist churches in the northeast. In addition to opposing slavery, they denounced racial prejudice. They argued that white women had a natural bond with female slaves. The last two ideas were extreme even for radical abolitionists. By the end of the year, the sisters were being attacked from Congregationalist pulpits.

Sarah responded to those attacks by writing a series of letters to the president of the abolitionist society that sponsored their speeches. These became known as Letters on the Equality of the Sexes and the Condition of Women, in which she defended women’s right to a public platform. By 1838, thousands flocked to hear their Boston lecture series.

Sarah, who emphasized feminism over abolitionism, and Angelina, primarily interested in the antislavery movement, were powerful writers. They succinctly summarized the abolitionist arguments that would lead to the Civil War. Sarah’s work deserves much more recognition than it has received. She addressed many issues familiar to modern feminists over 150 years ago.

In 1838, Angelina married Theodore Weld. They planned for Angelina to remain active in the movement, but the demands of being a wife and mother forced Angelina to retire from public life. Sarah moved with the couple to Belleville, New Jersey, and also ceased her public activities.
Angelina bore three children, in 1839, 1841 and 1844.

In 1839, Sarah and Angelina attempted to disembark from a ship in Charleston Harbor to attend their mother’s funeral, but riots threatened the city. The mayor refused to allow them to land because of public safety issues.

That year the sisters edited American Slavery as It Is: Testimony of a Thousand Witnesses, a collection of newspaper stories from Southern newspapers written by Southern editors.

Until 1844, Theodore Weld was often away from home, on the lecture circuit or in Washington. Financial pressures forced him to return home and support his family. For a time they lived on a farm and operated a boarding school. Many abolitionists sent their children to the school.

During the Civil War, the sisters wrote articles in favor of the North. In March 1863, they urged women to rally to the Union cause and to hold a convention to support the war effort. Angelina addressed the gathering, which was presided over by Lucy Stone, Elizabeth Cady Stanton and Susan B. Anthony.

After the war, the sisters supported civil rights. Their nephews—Archibald, Francis, and John Grimke—were the mulatto sons of their brother Henry and his slave Nancy Weston. The sisters took them in and paid for their graduate education.

Francis was a Presbyterian minister who graduated from Princeton Theological Seminary. In December 1878, he married Charlotte Forten, a noted black teacher and author. They had one daughter, Theodora Cornelia, who died in infancy. Archibald’s daughter, Angelina Weld Grimke, (named after her aunt) became a celebrated poet.

On March 7, 1870, when Sarah was nearly 79, and Angelina 66, the sisters declared a woman’s right to vote under the 14th Amendment, and deposited ballots in the local election. With 42 other women, the Grimke girls marched in a snowstorm to the polling place. They were jeered by many onlookers, but were not arrested.

Sarah spent her life promoting equality and free speech. She never sought special treatment for women or African-Americans, only an equal opportunity to succeed. In her own words:

All I ask of our brethren is that they will take their feet from off our necks and permit us to stand upright on the ground which God intended us to occupy.

Sarah Moore Grimke continued to campaign for civil liberties and women’s rights until her death on December 23, 1873. She was inducted into the National Women’s Hall of Fame in 1998.