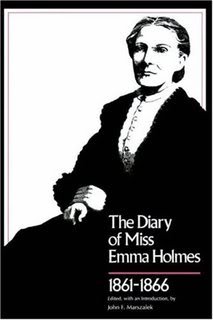 Emma Holmes, a Civil War diarist and teacher, was born in 1838 in Charleston, South Carolina, to a plantation owner. During the Civil War, from February 1861 until March 1866, Emma kept a diary of her life in Charleston, the affairs of her family and history as she observed it. A true Confederate, like many others, she believed the war would be over within a few months.

In the spring of 1861, Emma recorded in her diary that “the city seemed suddenly turned into a camp. Nothing was heard but preparations for war. The great body of citizens [seems] to be so impressed with the justice of our cause that they place entire confidence in the God of Battles.”

Four of Emma’s five brothers served in the Confederate Army. Her oldest brother Henry was a doctor. Fortunately, all of her brothers survived, although many of her friends and relatives did not.

In December 1861, the Holmes mansion in Charleston was destroyed by fire. Emma wrote on December 17, “I look beyond to brighter times and firmly believe that God has permitted this to unite us still more closely than before and to prepare and purify us through suffering for the great position he means us to occupy.”

A telegram received in July 1862 brought the news of the death of Emma’s cousin Henry, “the idolized son, brother, husband and father of four little boys—it is too terrible.”

By 1863, Charleston society was suffering. The blockade runners were no longer as effective as they were earlier in the war. Funerals were so numerous that they became social events. Large sections of the city were vacant. Most schools and churches had closed. Emma wrote of a “mobocracy” that had taken over the city, the “uncouth and uneducated by Charleston society standards.”

Slaves began to leave and women who had never taken care of their families had to learn to mop and do laundry. Rising at 6 am every day, Emma swept floors, washed clothes and cooked meals. And she detested her new way of life.

Beginning in 1863, Charleston was occasionally bombed for a year and a half until its surrender. Emma wrote during a nighttime bombardment:

It was a most peculiar and fearful sound, the sharp scream or whiz through the air, and they [the shells] sounded exactly as if coming over the house. I was startled and much excited, but not frightened, but it produced a very solemn feeling. I lay with the windows partly open every moment expecting a shell might burst and kill me and the idea of dying alone, while others were so near was startling.

Only 40% of the buildings in the city survived the cannonading,

On May 8, 1863, Emma wrote, “The news from Virginia is most cheering – decisive victories being gained on Saturday and Sunday at Chancellorsville.” The following day, she was “too shocked to learn by the paper that General Earl Van Dorn has been murdered,” and on May 11, “Stonewall Jackson is dead. The mournful tidings are swept over the length and breadth of our land by the electric wires with crushing effect.” At the end of December 1863, she wrote, “I sometimes think my journal will be merely a catalogue of deaths.”

Many elite women served as teachers during the Civil War. While the men were off fighting in the war, the children were left without educators. Teaching was one of the few ways women could make money, but the new profession was not easily accepted by Southern society.

Emma’s family disapproved of her decision to teach, but they needed the income. Emma tutored throughout the war years to meet expenses. As General William Tecumseh Sherman‘s army approached in 1865, she wrote, “still carried on school amidst constant false alarms and interruptions.”

After the Union army had passed, she wrote on March 11: “Homeless exiles we are now indeed in the bitterest sense, when our very graves and altars are profaned and ruined by the vilest of hands.”

Near the end of the war, she wrote:

What can ever bridge over that fearful abyss of blood, suffering, affliction, desolation, and unsummed anguish stretching through these past four years? The blood of the slain heroes cried aloud against such an end – as if end it could be. Peace on such terms is war for the rising generation.

After the Civil War ended, Southerners were humiliated when they were forced to swear loyalty to the enemy. Southern women seemed to take defeat especially hard. Emma probably echoed the feelings of many when she wrote:

Saturday the 22nd news arrived that Lincoln had been assassinated at Ford’s Theatre in Washington. After shooting him, the man sprung out brandishing a dagger exclaiming “Sic Semper Tyrannus” “Virginia is avenged” – and that the same night, April 11th [should be April 14] Seward had been stabbed in several places and his son mortally wounded.

It all seemed so Theatric and improbable that for many days we could not believe it till confirmed on official authority. The following Wednesday we were still more confounded and bewildered by hearing that negotiations for peace were arranged between the generals, on the terms that we were to go back into the Union, on the footing we had previously been, all our right, privileges, property and Negroes restored as far as possible…

To go back into the Union!!! No words can describe all the horrors contained in those few words – our souls recoiled shuddering at the bare idea – what can ever bridge over that fearful abyss of blood, suffering, affliction, desolation and unsummed anguish stretching through these past four years. The blood of our slain heroes cried above against such an end, if end it could be – peace on such terms is war for the rising generation. We could not, we would not believe it…

Emma Holmes ended her diary in March 1866, with this last entry, “Despair is laying its icy hand on all. Day by day it becomes harder to get money… for the necessaries of life.”

The Diary of Miss Emma Holmes was published in 1979 by the Louisiana State University Press.