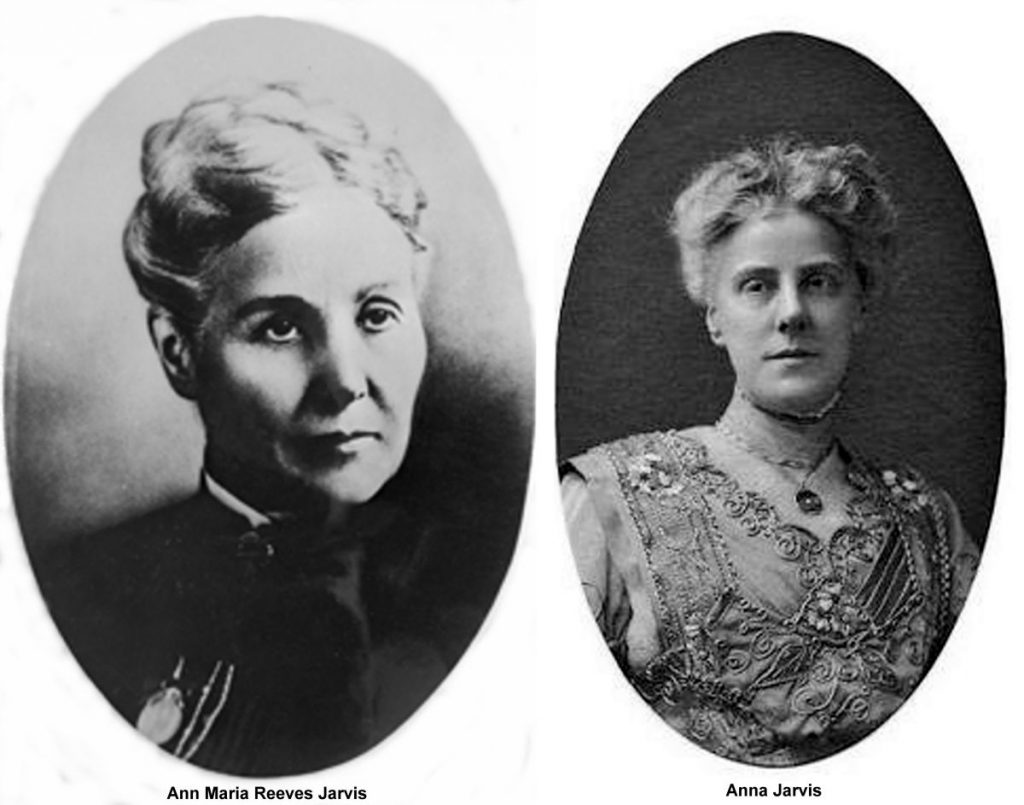 Anna Marie Jarvis is the founder of the Mother’s Day holiday in the United States. Her birthplace, known as the Anna Jarvis House, was listed on the National Register of Historic Places in 1979. It was built in 1854 and is a two story, frame dwelling, which is also notable as General George B. McClellan‘s first field headquarters during his 1861 western Virginia campaign.

Anna Marie Jarvis was born May 1, 1864, in Webster, West Virginia, the ninth of eleven children born to Reverend Granville and Ann Reeves Jarvis. The family moved to nearby Grafton when Anna was a year old. In 1881, she enrolled at the Augusta Female Academy in Staunton, Virginia, now Mary Baldwin College, graduating in 1883. Anna then returned to Grafton and taught school for seven years.

From childhood, Anna Jarvis often heard her mother say that she hoped that someone would one day establish a memorial for all mothers, living and dead. An incident occurred during a class prayer given by Mrs. Jarvis in the presence of twelve-year-old Anna at the conclusion of her lesson on “Mothers of the Bible.” She closed by saying, “I hope that someone, sometime will found a memorial mother’s day commemorating her for the matchless service she renders to humanity in every field of life. She is entitled to it.”

The clubs provided medicine for the indigent, hired women to work for families in which the mothers were ill and inspected bottled milk and food. Local doctors supported the formation of these clubs.

During the Civil War, the Baltimore and Ohio Railroad made Taylor County a strategic site. In 1861, both Union and the Confederate officials ordered the local troops to hold the railroad at Grafton at all costs.

Ann quickly sensed a possible disruption in the clubs. She called an urgent meeting and announced her objectives:

To make a sworn-to agreement between members that friendship and good will should obtain in the clubs for the duration and aftermath of the war. That all efforts to divide the churches and lodges should not only be frowned upon but prevented. We are composed of both the Blue and the Gray.

The Mothers’ Day Work Clubs provided relief to Yankee and Rebel soldiers in the area thus preserving an element of peace in a community that was being torn apart by political differences. For the remainder of the war, Ann Jarvis worked tirelessly despite the personal tragedy of losing four of her children to disease. Near the end of the war, the Jarvis family moved to the larger town of Grafton.

Tensions increased as Union and Confederate soldiers returned home after the war. In the summer of 1865, Ann organized a Mothers’ Friendship Day to bring together soldiers and neighbors of all political beliefs. The event was a great success despite the fear of many that it would erupt in violence. Mothers’ Friendship Day was an annual event for several years.

After Granville Jarvis’ death in 1902, Ann Reeves Jarvis moved with daughters Anna and Lillian to Philadelphia to live with her son Claude. Ann Reeves Jarvis died there on May 9, 1905, at the age of 72. On the day she was buried, the bell of Andrews Methodist Episcopal Church in Grafton was tolled seventy-two times in her honor.

Anna Jarvis never forgot her mother’s prayer when she was twelve. She held a memorial to her mother on the first anniversary of her death, where she praised the outstanding accomplishments her mother had made through the Mothers’ Day Work Clubs she had established before the Civil War.

Miss Jarvis thereafter embarked upon a campaign, employing every means available to establish Mother’s Day as a national holiday. She wrote hundreds of letters to legislators, executives and businessmen. She was a fluent speaker and seized every opportunity to promote her project.

Her first real break came from merchant and philanthropist John Wanamaker of Philadelphia. With his support, the movement gained momentum. On May 10, 1908, the first Mother’s Day ceremonies were held at the Andrews Methodist Episcopal Church in Grafton and in the Wanamaker Store Auditorium in Philadelphia.

Anna Jarvis also started the tradition of wearing white and red carnations to pay tribute to mothers, because the carnation was her mother’s favorite flower. A white carnation was worn to honor deceased mothers, and a red one to honor living mothers.

The adoption of Mother’s Day spread more rapidly than even Miss Jarvis expected. In 1909, forty-five states, Puerto Rico, Hawaii, Canada and Mexico observed the day with appropriate services. In 1914, President Woodrow Wilson signed a resolution proclaiming Mother’s Day a national holiday to be celebrated on the second Sunday in May.

Anna never married and had no children. During the 1920s, she soured on the holiday, because it had become so commercialized. What she had intended as a day of sentiment quickly turned into a day of profit for florists and greeting card companies – a development which deeply disturbed her.

She dedicated herself to returning Mother’s Day to its roots. She incorporated herself as the “Mother’s Day International Association” and tried to retain some control over the holiday. She organized boycotts and threatened lawsuits. The “American War Mothers” used Mother’s Day for fundraising, which Anna resented. She crashed their 1925 convention in Philadelphia and was arrested for disturbing the peace.

Jarvis’ fervent attempts to reform Mother’s Day continued until at least the early 1940s. She and her sister Ellsinore spent their family inheritance campaigning against what the holiday had become. Both died in poverty.

Anna Marie Jarvis died in a state of dementia at the age of 84 on November 24, 1948, in a sanitarium in West Chester, Pennsylvania. She is buried beside her mother in West Laurel Hill Cemetery in Philadelphia. On the day of her burial, the bell of the Andrews Church in Grafton, West Virginia, tolled eighty-four times in her honor.

The International Mother’s Day Shrine in Grafton, incorporated on May 15, 1972, is a non profit organization dedicated to the preservation of the Spirit of Motherhood, as exemplified by the lives of Ann Maria Reeves Jarvis and Anna Marie Jarvis, and the institution of Mother’s Day they established.