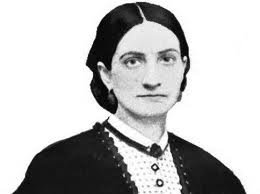 Kate did not believe in secession, but she quickly became a passionate supporter of the Confederacy. She blamed Abraham Lincoln for the war, condemned Yankees because they were Yankees, and her Irish temper lashed out against her own people for anything less than wholehearted patriotism. She believed that every able bodied man and woman should do their best for the South.

Kate’s mother had died prior to the war. Her father, too old to serve, remained at home. Her only brother David served in the army. Through 1861, an illness, then a reluctance to displease her brother, restricted her service to collecting supplies and distributing them to the soldiers.

But in April 1862, at the age of 26, she offered her services as a nurse, ignoring those in her family, who believed that hospital work was unladylike, and doctors who did not want women in the military hospitals. Her service began at Corinth, Mississippi, where the wounded and dying from the Battle of Shiloh were being cared for.

Kate kept a daily journal of her wartime experiences, often dashing off hurried notes of her observations and emotions. It tells us how nursing was a social affair at first and how it depended on the generosity of Southern women.

She often listed the names of patients who died in her care, noting in January and April of 1863 that there were so many wounded they could “scarcely take note” of their names. This compassionate act allowed many families to find the remains of their loved ones, even if it took generations to do so.

In the autumn of 1863, Kate enlisted in the medical department of the Army of Tennessee as a hospital matron and was transferred to Chattanooga. There, she cared for the soldiers who had been wounded at the Battle of Chickamauga and subsequent battles.

A Methodist minister, Dr. Heustis, made a speech at the depot calling upon the people to send up food and nurses to Chickamauga, as General Bragg has gone after the enemy and expects to recapture Chattanooga. He urged all who could possibly go with supplies, to do so immediately, but said there was no place there for ladies.

I made up my mind to go, though many begged me not to do so. Having friends in Ringgold, I knew I could not be very bad off; so collecting all the provisions and old linen I could, I started that afternoon.

Early the next morning I hurried back to the hospital, where I was kept busy nearly all day rolling bandages. I was assisted by a young man, Mr. Dearing, from Kentucky, who was disabled by a wound in the arm. It was as much as we could do to supply the demands of the doctors.

Reverend Mr. Green and my Negro servant (slave) were kept busy dressing wounds. We were seated on an upper gallery, where we could see the ambulances come in from the battlefield with their precious burdens. I saw as many as fifty come in at one time, and a dismal sight they presented. There had been no rain for some time, and the dust was so fearful that when the men were taken out of the wagons you could scarcely tell what color they were.

Rolling bandages was a necessity, but it was a great trial for us, for we would so much rather have been waiting upon the wounded. At last we were told we had rolled enough for that day, and we gladly went down stairs to see what we could do.

I got a bucket, and nearly filling it with wine, put in water and sugar, making a delicious drink. This, with eatables in a basket, Mr. Dearing. and I carried around, and it was highly appreciated by the men. We also visited the cars, which were standing on the tracks filled with wounded.

I arose bright and early, and hurriedly partaking of my breakfast, went to the hospital. I had always wished to go on a battlefield—not from any idle curiosity, but from a desire to know the worst, and see if I could be of any use.

While thinking over the matter, I met a Mrs. Weir, of Griffin, Ga., whose son had lost a leg in the battle, and was in a private house near the battlefield. She had come to nurse him, and said she would go with me to the battlefield if I would go out with her to see her son. Hundreds of wagons were coming in, but none returning that day.

After awhile, a nice looking, covered wagon came along, and after depositing its load of humanity, Mr. Dearing asked the owner to take us, but this, he stoutly refused to do, saying his horses were completely worn out. Mr. D. then said that one of the ladies had nursed at least one thousand Confederates. On hearing this, he immediately drew up and invited us all in.

We traveled over the roughest roads imaginable, and the thought occurred to me that if the wounded were brought this way they must indeed suffer. The surmise proved to be correct, for we met hundreds of wagons loaded with sufferers wending their way to Ringgold. We also saw many slightly wounded on foot going the same direction.

We left Mrs. Weir at Mr. Strickland’s, where her son was, and Mr. Tedford begged me to go on further, to Mr. Hunt’s, where were the wounded of Hindman’s division. He informed me that an excellent young lady, Mr. Hunt’s daughter, was doing much for the wounded, and would be glad of my assistance.

On our way I met Dr. Ray going to see a brother, whom he had just heard was badly wounded. He and several other surgeons had been wandering about for two days looking for the hospitals. I think he said they had been at General Cleburne’s division hospital, and the first day they were there they dressed the wounds of twelve hundred men.

This seems almost incredible, but we have had many more wounded than killed, and all of the wounded of the enemy were left in our hands. He also informed me that at first they had no food for the men nor rags with which to dress their wounds. I promised to send them some rags and also to visit the hospital.

I found Mr. Hunt’s home a very pretty cottage in the midst of a garden, which before the battle had been filled with fine shrubbery and flowers, but was now covered with tents and sheds filled with wounded. Every corner of the house was filled with wounded, many of them lying upon bunks made out of the branches of trees, a hard bed at any time, but much more so for these poor wounded veterans.

Kate cared for the wounded and assisted in organizing field hospitals in the campaigns in Tennessee and Kentucky, and made the wounded as comfortable as possible in Georgia in 1864, when the army was retreating before General William Tecumseh Sherman. She became one of the best known nurses in the Western Confederacy.

Although injured, her brother David survived the war. Kate returned to Mobile and published her journal, Hospital Life in the Army of Tennessee, in 1866. In the introduction, she wrote that while keeping her diary, she had “no idea of it ever appearing in print.” The reason she made the journal public was (in her own words) “to do good.” Her greatest concern was always the care of the sick and wounded and the success of the cause.

In another entry, she remarked that “scarcely a day passes that I do not hear some derogatory remarks about the ladies who are in the hospitals, until I think, if there is any credit due them at all, it is for the moral courage they have in braving public opinion.”

Kate never married. She supported herself by teaching. But during her later years, she got involved with her friends in such Southern organizations as the United Daughters of the Confederacy.