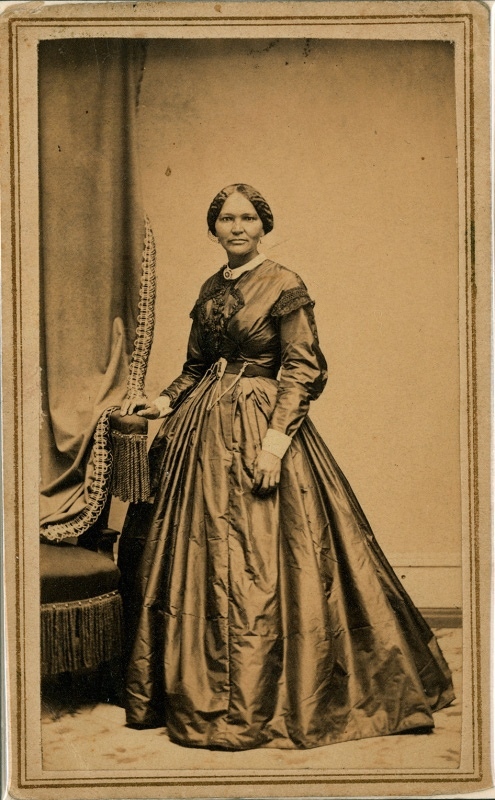 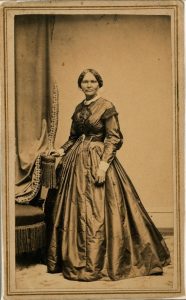 Elizabeth Keckley was a former slave who became a successful seamstress and author in Washington, DC, after buying her freedom in St. Louis. She created an independent business with clients who were the wives of the government elite: Varina Davis, wife of Jefferson Davis, Mary Randolph Custis Lee, wife of Robert E. Lee, and First Lady Mary Todd Lincoln.

Elizabeth Hobbs Keckley was born in 1818 in Dinwiddie Court House, Virginia. Her biological father was a white plantation owner, Colonel A. Burwell. Her mother Agnes was married to George Hobbs, who lived 100 miles away on another plantation.

I was my mother’s only child, which made her love for me all the stronger. I did not know much of my father, for he was the slave of another man, and when Mr. Burwell moved from Dinwiddie he was separated from us, and only allowed to visit my mother twice a year – during the Easter holidays and Christmas.

Elizabeth received her outstanding skills as a seamstress from her mother, who not only sewed for the Burwell family, but made extra money for the Colonel by sewing for his friends and acquaintances. Elizabeth helped her mother with the sewing, and became a fine seamstress.

When I was about fourteen years old, I went to live with my master’s eldest son, Robert Burwell, a Presbyterian minister. His salary was small, and he was burdened with a helpless wife, a girl that he had married in the humble walks of life. The years passed slowly, and I continued to serve them, and at the same time grew into strong, healthy womanhood. I was nearly eighteen when we removed from Virginia to Hillsborough, North Carolina, where young Mr. Burwell took charge of a church.

Elizabeth was forced to have sex with one of Robert Burwell’s friends, and she gave birth to a son, George. “The child of which he was the father was the only child that I ever brought into the world.” (Her son was light enough to pass for white. He joined the Union army during the Civil War, and was killed in 1861.)

After several unhappy years, Elizabeth was sent to live in St. Louis with Anne Burwell Garland, the Burwells’ married daughter. Anne Garland hired Elizabeth out as a seamstress.

I was fortunate in obtaining work, and in a short time I had acquired something of a reputation as a seamstress and dress-maker. The best ladies in St. Louis were my patrons, and when my reputation was once established I never lacked for orders.

About this time Mr. [James] Keckley, whom I had met in Virginia and learned to regard with more than friendship, came to St. Louis. He sought my hand in marriage, and for a long time I refused to consider his proposal; for I could not bear the thought of bringing children into slavery – of adding one single recruit to the millions bound to hopeless servitude.

Elizabeth begged her master to be allowed to buy her freedom, but he always refused.

Some time afterwards he told me that he had reconsidered the question; that I had served his family faithfully; that I deserved my freedom, and that he would take $1200 for myself and [my] boy.

Believing that she would soon be free, Elizabeth consented to marry James Keckley, but the marriage did not go well.

Mr. Keckley – let me speak kindly of his faults – proved dissipated, and a burden instead of a helpmate. More than all, I learned that he was an alcoholic, and a slave instead of a free man, as he represented himself to be.

Elizabeth’s dream of freedom was elusive, but one of her customers, Mrs. Le Bourgois, said, “You have many friends in St. Louis, and I am going to raise the $1200 required among them. I have $200 put away for a present; am indebted to you $100; mother owes you $50, and will add another $50 to it; and as I do not want the present, I will make the money a present to you.”

Mrs. Le Bourgois, God bless her dear good heart, was more than successful. The $1200 were raised, and at last my son and myself were free. Free! what a glorious ring to the word.

In 1860, Elizabeth and George moved to Washington, DC, where she opened a dressmaking shop. As word of her talent spread, she attracted more and more customers from Washington society. One of her customers recommended Elizabeth to First Lady Mary Todd Lincoln. The gowns she made for Mrs. Lincoln were praised in the newspapers for their beauty and elegance, even though many of them were created in a rush. Elizabeth’s business grew to include 20 assistants.

She became not only the First Lady’s dressmaker, but a confidante as well. Her dignity and trustworthiness earned the confidence of Mary Lincoln and her husband. Mary often called Elizabeth to the White House for comfort when the stress of the Civil War and the loss of their son Willie overwhelmed her.

After President Lincoln was assassinated, Keckley was a loyal friend to Mrs. Lincoln, at times neglecting her own business to be available for her. In 1867, in order to raise some funds, she helped the First Lady auction off her clothing in New York, which later led to a scandal.

In 1868, Elizabeth Keckley published her autobiography: Behind the Scenes, or, Thirty Years a Slave, and Four Years in the White House. The book got quite a lot of attention, but not the kind of attention she wanted.

Keckley must have realized that her book would not be well received in some circles, but it appears that she did not anticipate that her betrayal of the secrets and personal opinions of the First Couple’s private lives would elicit such a strong reaction from Mary Todd Lincoln and the Black community. Mary Lincoln’s eldest son had the book removed from publication.

Keckley lost many friends, and her business declined. She left Washington and taught in the Department of Sewing and Domestic Science Arts at Wilberforce University in Ohio.

Elizabeth Hobbs Keckley returned to Washington in 1898 and lived her last days at the Home for Destitute Women and Children, an institution she had helped to establish during the Civil War. She died there from a stroke on May 26, 1907, at the age of 88.