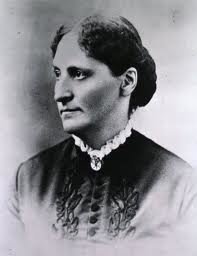 Linda Richards (1841–1930) was the first professionally trained nurse in the United States. Her experiences with nursing her dying mother and her husband, who was wounded in the Civil War, inspired Richards to become a nurse. She was the first student to enroll in the first nurse training school at the New England Hospital for Women and Children in 1872. She established nurse training programs in the United States and Japan, and created the first system for keeping individual medical records for hospitalized patients.

Linda Richards was born on July 27, 1841, the youngest daughter of Sanford Richards, an itinerant preacher who christened her Malinda Ann Judson Richards by her father, in hopes she would someday be a missionary like Ann Judson (1789-1826). When Linda was only four years old, the family moved to the Wisconsin territory where her father had purchased some land, but he died of tuberculosis just six weeks after the family arrived there.

Mrs. Richards and her three daughters had to return to Vermont to live with Linda’s grandparents in Newbury, Vermont. Her mother then bought a small farm nearby, but she soon became ill with tuberculosis. Linda nursed her mother until her death from the disease in 1854, when Linda was only 13 years old.

Dr. Currier was the family doctor who took care of her mother, and Linda picked up a little medical knowledge from him. She continued to live with her grandfather until she was 15, when she enrolled in the St. Johnsbury Academy to be trained as a teacher. Though she was not very satisfied with that profession, Linda completed her training and taught school for several years.

Linda Richards met George Poole, and they were engaged in 1860. Poole marched off to fight in the Civil War with Vermont’s Green Mountain Boys before they were married. He came home severely wounded in 1865, and Richards cared for him until his death in 1869.

Inspired by these personal losses, Richards moved to Boston and went to work as an assistant nurse at the Boston City Hospital, where she worked tirelessly but received little training. Nurses were treated little better than maids there and she left after only three months.

In 1872, New England Hospital for Women and Children established the first American nurse training school. Richards was the first to enroll in the first class of five students for a one-year program. Linda described her experiences there:

We rose at 5.30 a.m. and left the wards at 9 p.m. to go to our beds, which were in little rooms between the wards. Each nurse took care of her ward of six patients both day and night. Many a time I got up nine times in the night; often I did not get to sleep before the next call came. We had no evenings out, and no hours for study or recreation. Every second week we were off duty one afternoon from two to five o’clock. No monthly allowance was given for three months.”

She graduated in 1873; her diploma is in the archives of the Smithsonian Institution in Washington, DC. Richards then moved to New York City, where she was hired as night superintendent in the Bellevue Hospital Training School in New York. While working there, she created the first system for charting and maintaining medical records for each patient, which was to be widely adopted both in the United States and England.

Excerpt from Reminiscences of Linda Richards:

I shall never forget my first experience on night duty at Bellevue. No sooner had the day nurses left the wards than the gas was turned so low that the faces of the patients could not be distinguished. One could see only the dim outlines of figures wrapped in gray blankets lying upon the beds. If any work was to be done, a candle must be lighted, and only two candles a week were allowed each ward. lf more were used, the nurse had to provide them. At midnight all the steam was turned off; at 3 a.m. it was turned on again, and the crackling of the pipes would waken every one in the wards. How cold and dismal were the hours between midnight and three o’clock in the morning!

The captain of the night watch made several rounds of the wards through the night, and at 5 a.m. he turned off all the gas, leaving us in total darkness. Patients took advantage of this condition to leave their beds and give trouble in gangways. At the end of my first month I told Sister Helen [her boss] I could not be responsible for the patients unless I could have light in the wards. She said, “Go to the warden and tell him.” Under the solemn promise (always faithfully kept) to use no more gas than would enable us to fulfill tour duties, and to turn of all gas as soon as it was light, we were allowed night light. So one step in advance was taken.

Aware of how little she still knew as a nurse, Richards began her quest to acquire more knowledge and establish high quality nurse training schools. In 1874, she returned to Boston as superintendent of the floundering Boston Training School for nurses, where she began to encounter physician opposition to the training of nurses. Her administrative experience helped her to improve the course, and it became one of the best of its kind in the country.

In an effort to further upgrade her skills, Richards undertook an intensive seven-month nurse training program in England in 1877. She spent two months at St. Thomas’ Hospital in London, where she met Florence Nightingale. At Miss Nightingale suggestion Richard studied at King’s College Hospital in London and the Edinburgh Royal Infirmary in Scotland.

When she returned to the United States, Richards pioneered the founding and superintending of nursing training schools across the nation. After some minor health problems brought on by overwork, she established the first nurse training program in Japan in 1885 and supervised the school at the Doshisha Hospital in Kyoto for five years.

After returning to the states in 1890, Richards helped to establish special institutions for those with mental illnesses. She served as director of training schools at the Taunton Insane Hospital in Massachusetts, Worcester Hospital for the Insane and Michigan Insane Asylum.

She was elected first president of the American Society of Superintendents of Training Schools and served as head of the Philadelphia Visiting Nurses Society. She retired in 1911 at age 70 and wrote her autobiography, Reminiscences of Linda Richards, which was republished in 2006 as America’s First Trained Nurse.

Linda Richards suffered a severe stroke in 1923 at age 82, and lived out her life at the New England Hospital for Women and Children where she had received her first training. She died there on April 16, 1930.

In 1976, Richards was inducted into the American Nurses Association Hall of Fame, and the National Women’s Hall of Fame in 1994.

Linda Richards was one of those amazing women who stretched the boundaries of what was considered ‘woman’s place’ in nineteenth-century American society.