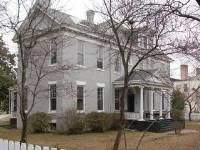 Image: Widow Jane Howison Beale, Fredericksburg’s most prominent woman, lived in this home at the corner of Lewis and Charles Streets, and left a vivid account of the town during the Civil War. She was among the many who fled during the shelling from Federal artillery.

Early Years
Jane Howison was born in Fredericksburg, Virginia, in 1815, one of twelve children. Her parents, Samuel and Helen Moore Howison, were prominent members of the community. At the age of nineteen, Jane married William Churchill Beale. In 1846, William bought a large brick home in Fredericksburg. William died suddenly and unexpectedly of a heart attack in 1850, leaving Jane to cope with their large family alone.

And cope she did. At the time of William’s death, Jane was still recovering from the birth of her tenth child, but she soon took control of her life. She sold the mill William had owned to pay off their debts. In order to earn a living, she established a girl’s school in her home and took in boarders. She wrote, “I have been busy all day with preparations for the school which is soon to commence, and I found that constant occupation the best means of getting through this trying time…”

The Civil War
After the First Battle of Bull Run in July 1861, Jane Howison Beale began keeping a diary, in which she recorded the events and difficulties of life on the home front in a Southern town during the Civil War. The Journal of Jane Howison Beale (1979) paints a fascinating but realistic picture of life in Fredericksburg during the Civil War. Four of her sons enlisted in the 1st Virginia Infantry and the Fredericksburg Light Artillery.

Fredericksburg was halfway between the Union capital in Washington, DC, and the Confederate capital in Richmond, making the town a strategic location. The Union Army occupied the town on three separate occasions, the first being in the spring of 1862. Beale wrote in her diary on April 27, 1862:

Fredericksburg is a captured town, the enemy took possession of the Stafford hills which command the town on Friday the 18th, and their guns have frowned down upon us ever since, fortunately for us our troops were enabled to burn the bridges connecting our town with the Stafford shore and thus saved us the presence of the Northern soldiers in our midst, but our relief from this annoyance will not be long as they have brought boats to the wharf and will of course be enabled to cross at their pleasure.

it is painfully humiliating to feel one’s self a captive, but all sorrow for self is now lost in the deeper feeling of anxiety for our army, for our cause, we have lost every thing, regained nothing, our army has fallen back before the superior forces of the enemy until but a small strip of our dear Old Dominion is left to us, our sons are all in the field and we who are now in the hands of the enemy cannot even hear from them, must their precious young lives be sacrificed, their homes made desolate, our cause be lost and all our rights be trampled under the foot of a vindictive foe…

It is painfully humiliating to feel one’s self a captive, but all sorrow for self is now lost in the deeper feeling of anxiety for our army, for our cause, we have lost every thing, regained nothing, our army has fallen back before the superior forces of the enemy until but a small strip of our dear Old Dominion is left to us, our sons are all in the field and we who are now in the hands of the enemy cannot even hear from them.

Since my last entry my heart has been crushed with sorrow, for I have seen the death of my Son Charley mentioned in the Richmond paper. He fell in the battle near Williamsburg on Monday the 5th… He was the best, the most affectionate and dutiful of sons to his Mother, and she will ever cherish his memory with a fondness which none other can know.

The Union army blocked the flow of supplies into the town. Food and other necessities could only be obtained from the military authorities, and they often raised the prices. They also blocked the mail to and from the South. Townspeople had to find someone who was traveling south to sneak their letters out to friends and relatives.

We can hear nothing from our army or our friends, nothing which might tend in some measure to alleviate the affliction under which we are sorrowing. We are shut in by the enemy on all sides and even the comforts of life are many of them cut off, no one is allowed even to bring wood to town, and we know not how we are to be supplied with the means of cooking the small amount of food we can procure.

Battle of Fredericksburg
The residents suffered months of anxiety and fear leading up to the Battle of Fredericksburg in December 1862. They learned of the impending battle from the explosion of shells from the Union artillery on the opposite shore of the Rappahannock River. Citizens left town by the thousands. Some went willingly before the battle began; others resisted Confederate commands to leave until the soldiers were ready to drag them away.

A long procession of fleeing civilians gathered in the streets as they evacuated Fredericksburg – some of them with wagons, some with hand carts, some carried what they could hold in their arms. Jane Howison Beale and her family spent most of December 11 in their cellar, as the firing continued. With the help of a friend, the Beales left town in an ambulance furnished by the Confederate army. The roads in Spotsylvania County were soon crowded with civilians who gathered in groups and huddled together in the cold wind. Beale wrote:

As we passed beyond the line of the town and the turn of the road put the Willis Hill Promontory of land between us and the firing, a sense of security came into my mind and deep and heartfelt thankfulness for our deliverance from this great evil… but new objects attracted my attention and claimed my sympathy here, crowds of women and children had sought refuge in this sheltered spot and as night drew on they were in great distress, they could not return to the town which was already in possession of the enemy, and they had fled too hastily to bring with them the comforts even the necessaries of life.

Some few had stretched blue yarn counterpanes or pieces of old carpet over sticks, stuck in the ground – and the little ones were huddled together under these tents, the women were weeping the children crying loudly. I saw one walking along with a baby in her arms and another little one not three years old clinging to her dress and crying, “I want to go home.” My heart ached for them and if I could I would have stopped the ambulance and taken them in, but I did not know then that I might not have to spend the night out in the open air myself….

By December 12, 1862, a large portion of Fredericksburg’s population were scattered across Spotsylvania County. The refugees were taken in by their rural neighbors. Plantation owners took in virtual strangers, filling up their outbuildings with entire families. Massaponax Church and Salem Church opened their doors to the homeless.

The hundreds of civilians who hid from the soldiers and remained in Fredericksburg during the battle endured four terrifying days of shooting, street fighting and looting by Union soldiers. Remarkably, only two civilians were killed. When the battle was over, nothing had been accomplished militarily by either side.

During the following days and weeks, the displaced residents returned to find their town a mass of rubble. Almost every building had suffered damage of some sort. Eighty-four buildings were entirely destroyed. Clothing, beds and other household furnishings littered the streets. The destruction of the city was so bad that some families never returned and it would take over a century for Fredericksburg to recover.

Jane Howison Beale noted in her diary that in general she “escaped so much better than any one else.” Her home at Lewis and Charles Streets had not been burned or looted, and she continued to live there until her death in 1882.

SOURCES
Jane Beale Diary
A Glimpse Into the Past: Jane Howison Beale
Caught in the Crossfire: Civilians at Fredericksburg
Escape to Spotsylvania and Beyond: The Geography of Fredericksburg’s refugees