Female Prisoner in the Civil War 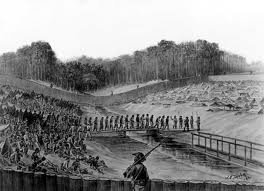 With the Civil War raging around the country, Philadelphian Florena Budwin decided not to let her husband go off to war without her. She disguised herself as a man and enlisted alongside him in the Union Army, and maintained her disguise throughout her active service.

Unfortunately, both the Budwins were captured during fighting by the Confederate Army and sent to Andersonville Prison in southern Georgia, the Confederacy’s most notorious prisoner of war camp. Andersonville was built in early 1864 after Confederate officials decided to move the large number of Federal prisoners in and around Richmond, Virginia to a place of greater security and more abundant food.

The first prisoners were brought to Andersonville in late February 1864. During the next few months, approximately 400 more arrived every day. By the end of June, 26,000 men were penned in an area originally meant for only 10,000 prisoners. The largest number held at any one time was more than 33,000 in August 1864. The prison pen was surrounded by a stockade of hewed pine logs that varied in height from 15 to 17 feet. The pen was enlarged in late June 1864 to enclose 26 1/2 acres.

However, the Confederate government could not provide adequate housing, food, clothing or medical care for their Federal captives because of deteriorating economic conditions in the South, a poor transportation system, and the desperate need of the Confederate army for the available food and supplies. During the 14 months it existed, almost 13,000 died from disease, poor sanitation, malnutrition, overcrowding or exposure to the elements.

When General William Tecumseh Sherman began his March to the Sea through Georgia in the fall of 1864. As the wings of Sherman’s army fanned out, they left a path of destruction sixty-six miles wide. Confederate authorities feared that Sherman might try to liberate the Union soldiers who were living in horrible conditions at Andersonville, and quickly moved most of the prisoners to other camps in South Carolina and coastal Georgia.

Florena Budwin was transferred to the Florence Stockade near Florence, South Carolina, which was hurriedly being built by local slaves, but at the time she had no idea where she was going. Along the way, she wrote on September 17, 1864:

Finally we escape Charleston! No shelter, barely any food, smallpox, yellow fever, the intolerable heat and humidity. It’s a wonder that anyone survived. Now I am not sure where we are going. The Rebs just piled us onto these freight cars and started rolling. At first the countryside was flat and smothered with trees, but now it is becoming a bit swampy. All the guards do is bring in fresh water twice a day and dump out the dead bodies.

Florence was chosen as the site of the new Confederate prison because three railroads connected in the town, which would facilitate the transportation of the prisoners. The construction of the prison at Florence was not complete when Budwin and 6000 other prisoners arrived from Charleston.

We reached our new pen sometime last night. The guards pushed us out of our cars and herded us into a cornfield to spend a cold and restless night. Our suffering ended around nine in the morning when we were finally marched ten miles to the Florence Stockade. It looks just like Andersonville, four huge walls enclosing about 15 acres and a small stream, a gate in the west wall, a road, and of course the narrow ditch that means death to any one who steps over it – the dead line.

Only here, the guards walk around the outside of the walls on an embankment, where they can harass the prisoners and lure them over the dead line to shoot them. There is not much in the way of anything inside, just several stumps left from the construction of the walls. I was among the first to get in, so I dug up some stumps and built a little hovel. There was even a little left over to use as fuel, I think I will need it this winter.

The prisoners were suffering from smallpox, yellow fever, hunger and exhaustion. Conditions in the stockade were horriffic, as Florena wrote on September 29, 1864:

This place gets colder ever day, and it does not help when your clothes are falling apart. The vermin are still a huge problem, as well as the hunger and insanity. To make things worst, some of the women of the town come stand on the embankments and mock us in their taffeta and silk. Typical Southern hospitality! I can not be too harsh though. One woman used to come by with a basket of food and throw it over the walls to us. The guards kept trying to stop her and finally banned her from ever coming back.

By October 12, over 12,000 prisoners were being housed at the stockade, with a death rate of more than 20 per day. The majority of the prisoners had no blankets. Fortunately, a supply of clothing and other supplies arrived from the Union Sanitary Commission in the middle of October. One corner of the stockade was made into a crude hospital.

The year is almost over and there is no end in sight to the suffering. Every day men drop like flies. As I was walking through the companies the other day, a man stuck his blackened foot out of his dugout and asked me to cut his toes off! He was not brave enough to do it himself, but he knew it had to be done to save the rest of his foot. Some men are not so lucky, John January had to hack off both of his feet in order to save his life.

Last week the pen was inspected, so we each received a mandatory check up. There was no way to avoid it and I could not hide my identity, so the Rebs finally found me out. To my surprise they treated me well and I am now in my own partition of the stockade, with my own special rations and clothing provided by the women of Florence. Now, I work in the clinic with the sick men. I know their suffering better than any Confederate doctor could, so I try to give them an extra measure of comfort. Most of them are too far gone to save, so I just try to ease them on their way.

This winter seems never to end, I get the feeling it will outlast me. I managed to pick up pneumonia from the hospital, and I have been in bed for weeks. The Southerners have all been very kind towards me, but I do not think it will help. I just have no will to return to the horrid life I had been living. I am sick of the hate and the fear and the needless death and suffering. This place is enough to make anyone lose her faith in humanity.

Florena Budwin died on January 25, 1865, a little over a month before the prison at Florence was closed and the prisoners were sent to North Carolina where they were paroled to the North. She was 20 years old.

An estimated 16,000 Union prisoners were held captive in the Florence Prison Stockade between September 1864 and January 1865. In that short period of time, well over 2000 prisoners died from malnutrition and disease. The owner of a plantation adjacent to the prison allowed the dead to be buried in trenches on his property.

This area was later established as the Florence National Cemetery. A plain marble headstone there bears Florena Budwin’s name and the date of her death. She is believed to be the first woman to be buried in a national cemetery.