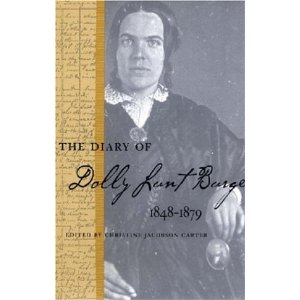 Dolly Lunt was born in Maine in 1817. As a young woman, she moved to Georgia to join her recently married sister. While teaching school there, she met Thomas Burge, whose wife had died in 1848, leaving him with five children. 1848, Dolly began to keep a diary.

In 1850, at the age of 33, Dolly married Thomas Burge and moved to his plantation near Covington, Georgia, about 35 miles east of Atlanta. She helped Thomas run the farm and became a mother to his children. In 1855, she gave birth to a daughter, Sarah. For some reason, they called her Sadai. Dolly’s diary is filled with news about her slaves, whom she called servants. Some of her writings show that she struggled with the morality of slavery.

Thomas died of tuberculosis in 1858, leaving Dolly with the responsibility of caring for the plantation, the family, and the slaves. Less than three years later, the Civil War broke out. There were Confederate and Union soldiers in the area from time to time, but not until 1864 did they threaten her home and family.

In November 1864, General William Tecumseh Sherman began his famous March to the Sea. Dolly’s neighbors warned her that Sherman’s army was moving east from Atlanta, visiting plantations and stealing money and valuables.

Dolly went outdoors several times that night to see large fires burning at nearby homes and barns. The next morning, she sent some slaves to hide her mules, wagon, and gear in the woods, while she packed clothes for herself and Sadai. She divided the meat in the smokehouse among the slaves and buried her silver.

Dolly slept in her clothes at night, expecting them Yankees to descend upon her at any moment. While talking to a neighbor, Dolly saw some Union soldiers in the distance. She hurried back home and told her slaves that they had better hide.

“Like demons they rush in,” she wrote about the Yankees. The yard of her plantation was soon full of them. They raided her pantry, kitchen, and cellar, stealing flour, sugar, and pickles. They shot her young pigs. She ran out and appealed to an officer. “I cannot help you, Madam,” he said, “it is orders.”

The soldiers began to round up the young Negro boys. One came crying to Dolly, and she told him to hide in her room, but they soon found him and dragged him away. They even ransacked the slave cabins, but the officer allowed Dolly to bring the remaining possessions of the slaves into her house.

The soldiers set fire to some cotton bales in her carriage house, but the flames burned out before they spread. A captain who knew Dolly’s brother kept her house from being torched.

That night, Dolly’s bedroom was filled with slaves and their bedding. “They were afraid to go out, for my women could not step out of the door without an insult from the Yankee soldiers,” Dolly wrote. The slaves lay down on the floor and went to sleep, but Dolly watched all night, expecting her outbuildings to burst into flames at any moment.

They were all famished from not having any supper the night before. “Some of my women,” her diary says, “had gathered up a chicken that the soldiers shot yesterday, and they cooked it with some yams for our breakfast.” Most of Sherman’s army had passed by ten o’clock that morning, “leaving me poorer by thirty thousand dollars than I was yesterday morning.”

When the war was over, some of her slaves returned as freedmen. Reconstruction was not much easier than the war years had been, but Dolly managed to keep the farm going. She died there in 1891. As of 1918, when her diary was first published, many of the children and grandchildren of her former slaves still lived at Burge plantation.

P.S. I believe that slavery is one of the worst things that ever happened in our country, and I don’t want to offend my readers. As I provide you with these accounts of women who lived back then, I will tell it as it was written, and leave you to take from it what you will.